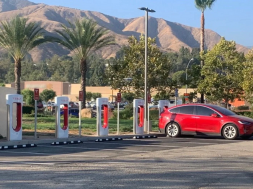 Other than Reliance New Energy, family office of Pawan Munjal – chairman and CEO of Hero MotoCorp, is an investor in Exponent Energy.

The companies have unveiled an electric three-wheeler that rapid charges from 0-100 per cent battery capacity within 15 minutes at Exponent’s e-pump network and claims to deliver a city drive range of 80-85 kilometres. The Altigreen neEVHD has an 8.19 kWh e^pack – a proprietary battery by Exponent, the partners said.

According to company statement, the rapid charging is achieved by the e-pump delivering 600 ampere of current to the e-pack while managing individual cell characteristics including thermals to ensure safety, long battery life, and performance consistency even at 50 degrees Celsius.

“The flexibility in uptime is one of the most critical aspects for electric three wheelers and that’s the vital link that has been missing,” Exponent co-founder Arun Vinayak told Business Standard, adding that expensive cell chemistry was restricting rapid charging usage on a wide scale.

Amitabh Saran, co-founder of Altigreen, said the company was very clear about having a partner who would be agnostic of cell chemistry. “We needed someone who has built a tech stack for fast charging,” Saran told Business Standard.

When Altigreen started nine years ago, the idea was to compete with fossil fuel powered vehicles. It realised the only way to do so was to focus on the entire electric stack including the software, gearboxes and batteries which was right-sized, said Saran.

The partnership with Exponent will have implications not just on the existing needs of Altigreen but in future vehicles that it comes out with, including the passenger versions, he added.

In March 2022, Altigreen received a fund infusion of Rs 300 crore investment led by Sixth Sense Ventures, Reliance New Energy, Xponentia Capital and others. The company is setting up a factory with a capacity to make 40,000 electric three wheelers per annum. It is also setting up a pan-India distribution network which would also be used to offer the benefits of Exponent’s rapid charging across India.

Exponent claims it has collected data for thousands of charging cycles (equivalent to many lakhs of kms) in 18 months of e^pack’s evolution. After six months of joint development and on-road testing with Altigreen, the solution has reached maturity to hit the market, the company said.

With their recent fundraise that included the family office of Munjal, Exponent is ramping up its e^pack production and setting up 100 e^pumps across Bengaluru in its first leg. It has raised a total of $6 million so far from prominent investors including Motherson Group, YourNest VC, 3one4 Capital among others.