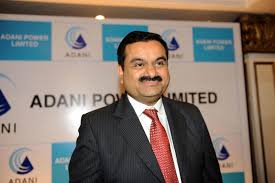 “While the immediate economic impact may slow us down, we are presented with an opportunity to pause, rethink, and design a new and faster transition to a low-carbon future,” he said

New Delhi: Billionaire Gautam Adani on Thursday said COVID-19 had an immediate economic impact but the pandemic presents an opportunity to design a new and faster transition to a low-carbon future as he expects the price of solar modules to drop further. Writing on Linkedin, he said the urgency of a green revolution in the energy sector has gained greater importance in view of COVID-19 challenges.

“While the immediate economic impact may slow us down, we are presented with an opportunity to pause, rethink, and design a new and faster transition to a low-carbon future,” he said.

In January, Adani had said that his group is aiming to become the world’s largest solar power company by 2025 and the biggest renewable energy firm by 2030.

Its existing portfolio of renewable power generating assets stood at over 2.5 GW. This is expected to more than double by 2020, with the implementation of 2.9 GW under construction capacity and would further touch 18 GW by 2025.

The head of India’s biggest infrastructure conglomerate Adani Group on Thursday said many of the system operators in Europe, faced with falling demand, are learning to manage grids at a remarkably high level of renewables in the energy mix, often up to 70 per cent.

This learning is invaluable as such a scenario was unlikely only a few months ago.

“While the generation balance may swing back as demand increases, the crisis has provided insights to operators on keeping the grid stable with high levels of renewable penetration. Post COVID-19, this may be the new norm,” he said.

Adani said the price of solar modules has dropped 99 per cent over the past 40 years.

“Given what I see, I expect prices to drop by an additional 99 per cent over the next 40 years – probably reducing the marginal cost of electricity to zero. Such a reduction, in turn, will mean the coexistence of two business models – one based on fossil fuels and the other driven by renewables – both supplementing each other in the near future but the pendulum swinging decidedly in favour of renewables in the long-term,” he said.

The adage that renewables are good for the environment, but bad for business is increasingly a thing of the past, he said.

Not just solar, he also expected the unit cost of wind power to fall significantly driven by innovation in technology and the massive deployment of new wind projects both on-shore and off-shore.

The predominant storage technology on the horizon appears to be hydrogen, he said.

“However, with the prospect of the future marginal cost of renewable energy dropping precipitously, green Hydrogen produced by the splitting water could be the game-changer.

“This Hydrogen could use much of the existing gas pipeline network for distribution, be blended with natural gas and be a green feedstock for the chemical industry. Add to this the fact that the energy density of a kilogram of Hydrogen is almost three times that of gasoline, and you have a momentum that would be near impossible to stop as Hydrogen fuel cell vehicle prices come down,” he said.

Adani said the International Renewable Energy Agency (IRENA) forecasts that employment in the clean energy sector, currently at 12 million in 2020, could quadruple by 2050, while jobs in energy efficiency and system flexibility could grow by another 40 million.

A recent IRENA report projects that this transition could lead to investment opportunities of USD 19 trillion in solar, wind, battery storage, green Hydrogen, carbon management and energy efficiency by 2050 making it one of the largest global industries.

“India is well-positioned to benefit. Our country is naturally endowed with very high levels of solar resources, and the long coastline makes an attractive proposition for wind power,” he said.

The sector received over USD 10 billion of FDI inflow over the past decade.