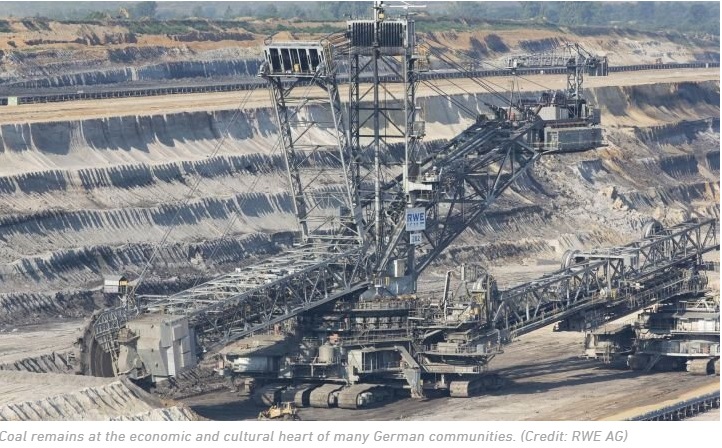 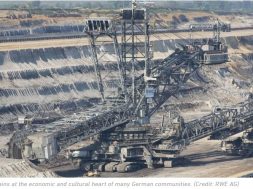 Hard-hit regions and utilities will be compensated for their role in Germany’s energy transition, but RWE faces more than $1B in uncovered costs.

Germany’s federal and state governments agreed Thursday on the tricky terms of the country’s coal phaseout, with the total bill set to run to €40 billion ($44.6 billion) as hard-hit regions are compensated for their social and economic contributions to the energy transition.

Although long a global leader in renewable energy, Germany today still relies on coal for 30 percent of its power generation. As previously planned, the country will phase out coal entirely by 2038.

But a review will be held between 2026 and 2029 to decide whether the date should be brought forward to 2035. Most European nations are phasing out coal at least a decade earlier; France, the U.K. and Italy will complete their phaseouts by 2025. The U.K. gets just 2 percent of its power from coal today.

Coal remains at the heart of many communities in Germany, even as the total employment figures in the sector have dwindled. The German soccer team Borussia Dortmund, based in the heart of coal country, marked its 110th anniversary last year with special-edition all-black uniforms dubbed “coal and steel.”

The date for plant closures was set by a diverse, government-appointed coal commission that included industry, environmental groups and unions.

Germany’s minister of economy, Peter Altmaier, described the phase-out plan as a “great success.” Not everyone is so enthusiastic, however.

RWE at the coalface of the transition
RWE will be the most heavily impacted among Germany’s utilities. The first eight plant closures, running through 2022, will all be RWE plants, with a total generation capacity of more than 2.8 gigawatts. In total RWE will be closing down just over 8.7 gigawatts of capacity and cutting 6,000 related jobs by 2030.

RWE is a walking paradox: It’s Europe’s largest carbon emitter and a leading global developer of renewable energy projects following its recent €40 billion asset swap with E.ON. The deal left RWE with 9 gigawatts of operating renewables and a 17-gigawatt pipeline of projects, including in the U.S.

RWE will receive €2.6 billion in coal phaseout payouts but expects that it will still be left with €900 million in losses.

“RWE stretches to the limits of what is possible,” said the company’s CEO Rolf Martin Schmitz in a press statement. “We will have to take significantly more power plant capacity off the grid in much less time than we originally expected. And we will bear the majority of the burden the German government demands for the coal phaseout.”

RWE had previously stated in its annual report that it would challenge what it regards as inadequate compensation through the courts.

“We were well aware that a consensus solution was needed in order to contribute to solve a social and political conflict, to achieve the climate protection goals and, last but not least, to regain planning security for our company,” said Schmitz.

Fellow coal generator LEAG, which will see just short of 7 gigawatts close, said talks with the government about its own compensation are ongoing.

Mining activity is also being scaled back accordingly, including the end of controversial plans for open cast mining in the Hambach Forest. RWE said this will force it to rely on more complex and expensive mining operations.

Thursday’s declaration also states that additional gas power capacity will be added in locations on the grid where baseload will be particularly thin on the ground.

A total of €14 billion of payments will be made to the states most affected by the phaseout for major investments until 2038. The lignite-heavy regions will receive a further €26 billion.

Patrick Graichen, director of the German think tank Agora Energiewende, told GTM that despite Thursday’s agreement, negotiations around the phaseout will continue.

“The planned phaseout timetable will most likely be up for discussion in the next legislative period. What will probably remain are the structural funds for the affected regions which have been agreed [upon],” he said.

As part of the European Commission’s Green Deal framework, EU member states are encouraged to ensure the green transition is a “just transition.” This is especially pertinent for the phaseout of coal. The plans revealed in Berlin are an early taste of things to come.

Matthias Buck, head of European energy policy at Agora Energiewende, said this is a first glimpse of the policies that might deliver on this pledge.

“Up to now, ‘just transition’ [has been] more of a buzzword, a political commitment that nobody will be left behind [rather] than a concrete strategy, underpinned with concrete commitments.”

Buck said national and regional governments will have to take the lead on the how these investments deliver on the “just” part of the equation.

The funding plan for the Green Deal assigns €7.5 billion to a Just Transition Fund (JTF) with the plan of folding in other money that can then be leveraged by the European Investment Bank in its new role as the EU’s Climate Bank. In figures released on Thursday, Germany has been allocated €877 million from the JTF, ranking behind only Poland, which will receive the maximum €2 billion.

0
0   0
previous Even Under Trump, U.S. Renewable Investment Hit a Record in 2019
next RUMSL & PGCIL sign PMC for solar parks