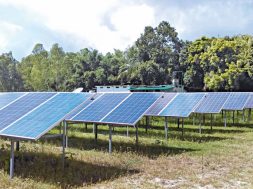 BERLIN  – Germany is set to miss its goal to cut carbon dioxide (CO2) emissions by a far wider margin than previously thought, a study said on Thursday.

Chancellor Angela Merkel’s government has already admitted it will miss a goal to lower emissions by 40 percent by 2020 from 1990 levels by about five percentage points.

But the Agora Energiewende think tank said on Thursday its new forecasts suggest Germany was only likely to manage a 30 percent cut due to strong economic growth and immigration.

“Only 30 percent instead of 40 percent less CO2 is not a little bit off, but a huge miss of the climate goal for 2020,” said Agora director Patrick Graichen.

Once dubbed the ‘climate chancellor’ for pushing other wealthy nations to address climate change, Merkel has come under fire for not moving Germany fast enough to cut its reliance on fossil fuels as it phases out nuclear power.

Agora supports Germany’s ambitious but costly move away from fossil fuels and toward renewable energy sources and has often weighed in on Berlin ministries’ policies.

Merkel said in March that Germany’s next government must set longer-term targets for cutting CO2 emissions soon after this month’s national election to provide clarity for local governments and companies to plan.

0
0   0
previous Spot down on renewable supply and falling use, curve strong
next ENEL IN TOP 20 OF FORTUNE’S “CHANGE THE WORLD” LIST