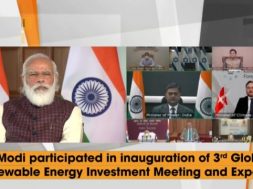 Technology giant Google LLC recently fulfilled its renewable energy commitment made about a year ago with purchases of electricity generated by wind power infrastructure located in the U.S. states of South Dakota, Oklahoma, and Idaho. Google, which is reported to have consumed as much electricity per year as the city of San Francisco, stated that all of its data centers and office buildings are now powered by renewable energies. The renewable generation capacity sourced by Google has now topped 3 gigawatts.

Popular services from Google such as its search engine, cloud storage and video-sharing platform rely on the continuous operation of the company’s vast network of servers. Statistics show that Google handles trillions of internet searches every year and publishes more than 400 hours of videos on Youtube every minute. The cost of having all of Google’s services available 24/7 is simply enormous.

Google stated that the company’s annual electricity consumption for 2015 totaled 5.7 terawatt-hours, which was comparable to the annual amount used by the whole San Francisco. The majority of Google’s consumption comes from the company’s data centers. Of the 15 data centers that Google currently owns, nine are located in the U.S., three in Europe, two in Asia, and one in South America. The first of the two data centers in Asia is in Changhua Coastal Industrial Park on the island of Taiwan.

Signing contracts with developers of solar and wind projects is more than simply fulfilling a commitment for Google. The company is also buying renewable energy certificates (RECs) in order to realize its goal. RECs ensure that certain amounts of electricity from renewable sources are bought. This in turn provides stable financial support for solar and wind energy companies so that they can built more power plants. By promoting RECs, Google is helping to expand the renewable energy market and has become a major customer at a global scale.

Besides Google, other technology giants such as Amazon, Microsoft, and Apple have been very active in the renewable energy market during 2017. Amazon follows behind Google as the second largest customer of renewable energies and has purchased 1.5 gigawatts of generation capacity – just half of Google’s total.

Microsoft this summer agreed to a contract that would see the company’s headquarter in Redmond, Washington, to have 25% of its power supplied by renewable sources. As for Apple, the company has made a deal with NV Energy Inc. to have its data center in Nevada running on solar power.