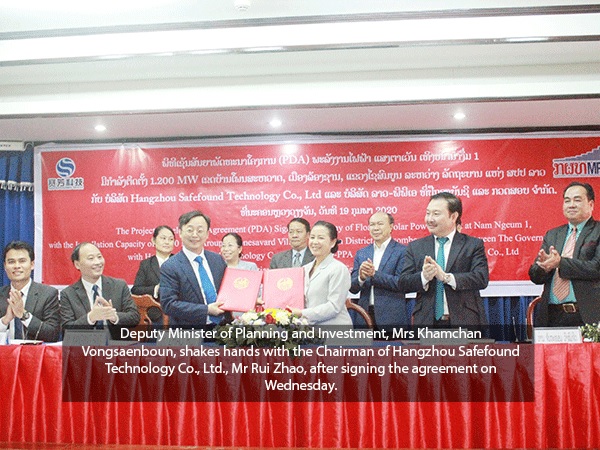 To support its efforts to achieve green growth and alternative and clean energy development in Laos, the government is partnering with a Chinese company on a solar power project.

Following a successful feasibility study on a solar energy project with an installed capacity of 1,200MW on the surface of the Nam Ngum 1 dam reservoir, a China-based company, Hangzhou Safefound Technology Co., Ltd., and LAO-PPA Co., Ltd. have signed a Project Development Agreement (PDA) with the government and will proceed with the scheme.

The feasibility study was conducted with a focus on the nearby community of Phonsavath village in Longxan district, Xaysomboun province, after the project developer recognised the potential of this ideal geographical location with almost year-round sunlight.
The PDA was signed at the Ministry of Planning and Investment in Vientiane on Wednesday, following the signing of a Memorandum of Understanding on the feasibility study in 2018.

The solar power project is a joint venture between the Lao government and Hangzhou Safefound Technology Co., Ltd. The government will hold a 20 percent share, while the company will own 80 percent of shares over a period of 25 years.

Covering a total area of 1,500 hectares, the solar power project is divided into different stages of development, depending on market demand and socio-economic development needs.

According to the development plan, a 300MW capacity solar power plant will be operational from late 2020 until 2023 with an annual power generation capacity of 37,852.86 GWh.

From 2023 to 2026, the plant’s capacity will be increased to 900MW and a transmission grid will be built from the project site to the Sengsavang Substation in Sengsavang Village, Thoulakhom district, Vientiane province.

“For our project in Laos, we have successfully conducted a feasibility study on the project alongside completion of the Environment and Social Impact Assessment. We also expect to get all the work done in order to reach a Concession Agreement before construction of the project can begin within this year,” he said.

After signing the PDA, the project developer will continue to implement other signed agreements within 24 months, including making a detailed plan of the project.

The company will proceed with development as planned to ensure it can enter into a Concession Agreement with the government, plan for the second and third phases of development, and seek foreign markets.