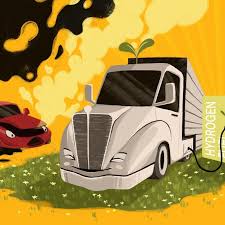 The second in a four-part series on China’s carbon neutrality goal of 2060 looks at the nation’s roll-out of hydrogen fuel-cell vehicles (FCVs) and refuelling stations more than a decade ago. The technology’s day in the sun may be arriving. The first part of the series is here.

Qingliqingwei, a two-year-old start-up, wagered last year that its business in hydrogen fuel cells was about to pay off.

China’s government was increasing its drumbeat of policies to direct the nation to go green, cut carbon dioxide emissions and reduce gaseous pollution. Tens of billions of yuan were offered in subsidies, incentives and tax breaks to wean drivers, carmakers and fleet operators in the world’s largest automobile market off petrol-guzzling vehicles.

The Shenzhen-based company rolled out a fleet of 600 lorries in June 2019, each fitted with a hydrogen fuel cell engine, capable of travelling as far as 350 kilometres (217 miles) before refuelling. The vehicles, comprising light delivery trucks and 4-ton lorries, were leased to couriers, logistic companies and garbage collectors.

“It is a near certainty that the government will allocate a huge sum of additional funds to subsidise of hydrogen-powered vehicles,” the company’s vice-president Li Junzuo said in an interview with South China Morning Post in Shanghai. “An increased financial support will facilitate our expansions.”

A little more than a year later, China’s President Xi Jinping pulled a surprise at the United Nations, setting a 2060 target for the country to attain carbon neutrality, becoming the second major economy in the world to put a date on the ambition.

As the world searches for the fine print of Xi’s plan – the implementation details are to be outlined in the country’s next five-year plan in March 2021 – Qingliqingwei is doing a roaring business. Its story underscores how far the Chinese government has put its considerable financial resources behind projects with very long-term, and often uncertain commercial viability.Read More..