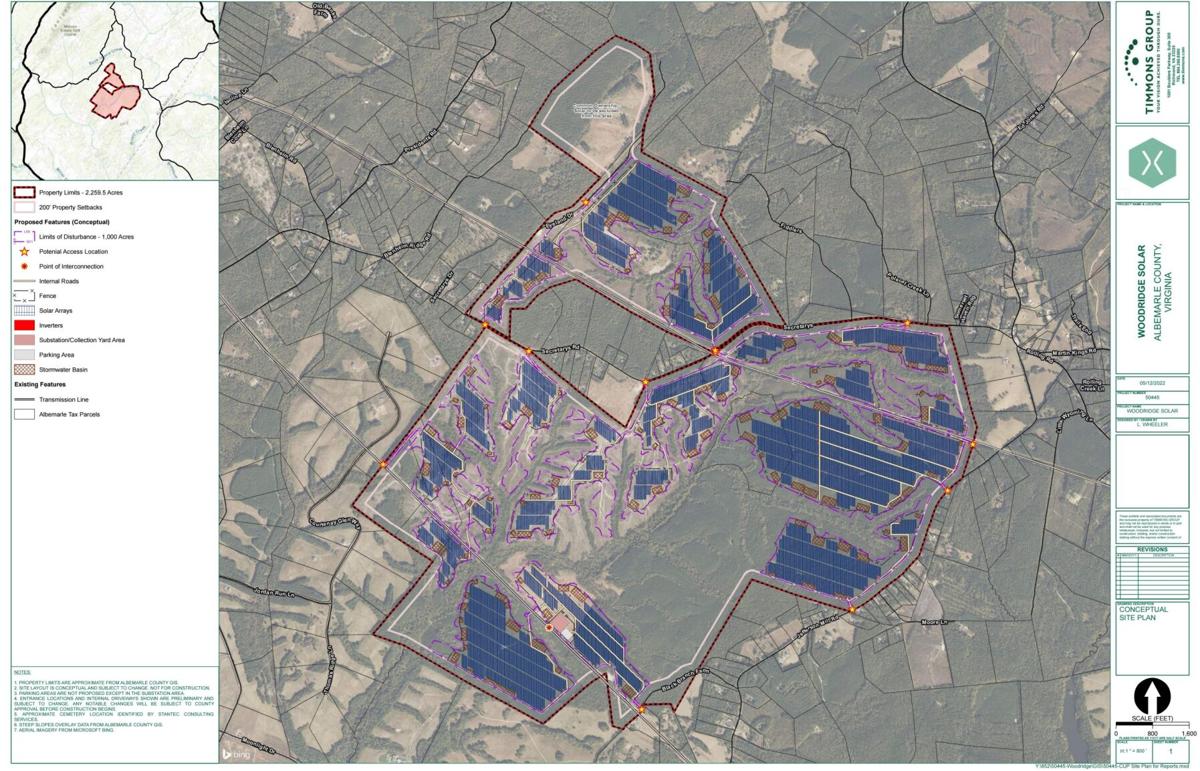 ACharlottesville energy company is proposing to build a solar farm on approximately 650 acres in southeast Albemarle County off Secretarys Road.

Hexagon Energy, a local clean energy development firm, is seeking a permit from the county to build a utility-scale solar panel project, which it is calling Woodridge Solar. The firm says the project, if approved, would produce enough electricity to power more than 25,000 homes during its 35-year lifespan.

The company is applying for a special-use permit from Albemarle to build the 138 megawatt capacity solar energy installation on about 650 acres of a 2,300-acre property that has been industrially timbered.

The property is owned by J D Land Holdings, L.C. and has historically been used for timbering planted pine over the last 80 years.

The application was submitted Monday, and a community meeting has not yet been scheduled. Albemarle staff have not yet started their review of the project, and no date has been set yet for the Planning Commission meeting. Ultimately, the commission will provide a recommendation to the Board of Supervisors, which has the final say.

“We see this as an excellent opportunity to balance energy production, natural restoration and continued hunting of the land in a place that really needs this power,” said Scott Remer, the director of development for Hexagon Energy.

A 2017 change to the county’s zoning ordinance allows large-scale ground solar installation in rural areas when the project obtains a special-use permit. If approved, this would be the largest solar project in Albemarle. There is not a specific policy regulating permitting for utility-scale solar projects in the county, but some supervisors have expressed interest in one.

In the county’s “renewable energy sourcing” section of its Climate Action Plan, which was approved in 2020, the goal is to “increase renewable energy generation capacity to the electrical grid system.”

The plan says that in supporting renewable energy projects at the utility scale, “the county will also strive to maintain a holistic perspective that accounts for potential climate benefits and the health of our local ecosystem.”

“In doing so, we will prioritize roof tops, parking lots, brownfields, landfills and post-industrial or other open lands over forested or ecologically valuable lands for siting utility-scale renewable energy installations,” the plan says.

“This project would be able to kick out power for about over half of Albemarle’s homes — 25,000 out of about 45,000 homes,” Remer said. “That’s a substantial chunk and is taking a step towards Albemarle’s aggressive Climate Action Plan.”

According to the United States Environmental Protection Agency, 38.9% of the area’s power comes from gas, while 12.6% comes from coal.

Remer said this site fits what Hexagon Energy looks for because it is located along a Dominion Energy high voltage power line and it is big enough to hold a large, utility-scale project. Large portions of the site have already been cleared as part of timbering operations.

According to Remer and the application, the project also includes a 200-foot setback established along the property boundaries, and the setback would be divided into two sections: forest and meadow.

The forest section would be a minimum of 100 feet where the existing mature vegetation and trees will remain. An additional vegetative 20-foot wide screening buffer would be provided in areas of the forest section that might be visible from the roads and adjacent houses, according to the application.

Within the other 100 foot-wide section, a “native pollinator-friendly meadow mix” will be planted.

There would be security fencing around the proposed project, which would be split into several individual sub-arrays, with each individually fenced to allow for wildlife to still roam the property.

Remer said the solar farm could be connected to the power grid within three to five years. PJM Interconnection, the regional grid manager that oversees who and how companies feed into the electrical grid, told the company that it should anticipate authorization to interconnect sometime in the summer.

“That gives us the flexibility to really start moving this project very quickly,” Remer said. “That’s one of the reasons that we’re really excited is that this has potential, rather than getting held up in the interconnection process, this has an opportunity to really start generating clean energy really soon.”

Remer said the company has mailed letters to property owners within a quarter mile of the site, and has also started outreach to owners of nearby wineries, Monticello, regional conservation groups and the Woodridge Sportsmen’s club that currently hunts on the land.

“This is the beginning of a dialogue with the community, and there’s plenty of opportunity to see some revisions happening, so hopefully this will work out best for everyone,” he said.