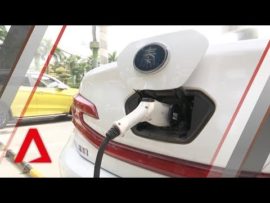 How Should Electric Car Drivers Pay For Using Roads? 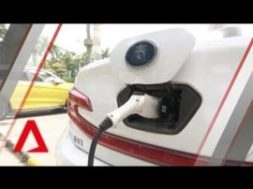 How Should Electric Car Drivers Pay For Using Roads?

America’s transportation infrastructure of roads, bridges, and tunnels costs a lot of money to build and maintain. For decades, motorists have paid state and federal taxes on gasoline and diesel fuel and that revenue was supposed to be set aside to pay for building roads and keeping them in good repair.

That’s the theory, anyway. In reality, politicians hate leaving large pools of money lying around unspent and so those funds are often tapped for other purposes. Also, since raising taxes is dangerous for any politician who wants to get reelected, Congress and state legislatures have been reluctant to raise the tax on fuels to keep up with inflation.

Taxes on fuels seem like an appropriate way to pay for roads. Those who drive more miles or drive heavier vehicles burn more fuel and so pay more to use the roads. That makes perfect sense. But fuel taxes actually cover less than half of the total cost.

Which leads into a discussion of how much electric car drivers should pay to support America’s transportation infrastructure. If states impose an annual flat fee, that is unfair to those who drive few miles. Even if it were possible to levy a tax on the electricity they use to recharge their batteries, why should EV drivers pay 100% of the cost of roads when drivers of conventional cars pay less than half that cost?

‘Tis a conundrum. A significant backlash against electric car drivers is evident in many parts of the country as legislatures pick arbitrary numbers out of the air to impose as annual surcharges on EVs. Illinois recently considered a flat $1,000 per year fee for every electric car, a proposal that was clearly punitive.

Utah has quietly begun addressing this issue in a novel way. Its Department of Transportation is asking EV drivers to participate in a voluntary program. Starting in January, instead of paying an annual registration fee they will report their actual mileage and pay 1.5 cents to the state for every mile driven, not to exceed the annual registration fee that those who don’t participate in the program pay.

It’s all about gathering data. Even though only 2% of the cars registered in Utah today are electric, “We know that the gas tax will be eroded over time and we’re just trying to be ahead of the game,” says Teri Newell, UDOT deputy director, according to the Deseret News.

Newell says the program is an attempt to charge people for how much they use the roads. “That’s really the fairest way to do it. The gas tax used to be a good way to replicate that, but now we need to start thinking about moving on to something different. It’s anybody’s guess at what point they fully are into the market and it becomes a bigger issue, so we just want to be ready.”

There is already talk of applying the program to all vehicles, which makes perfect sense assuming people actually report their mileage accurately. If the reporting is done digitally, that raises privacy issues.

If one spouse suspects the other of cheating, will those mileage records be subject to subpoena during the divorce to prove Person A was actually at the No Tell Motel instead of bowling on a certain night? Will police use the data to track criminals? Will Mark Zuckerberg sell the data to Russian hackers?

Then there is the issue of how to assess different classes of vehicles. Should someone driving a Hyundai Accent be expected to pay the same as the driver of a Ford Expedition? And what of the existing state fuel taxes? Will they remain for out of state drivers who use Utah roads?

The program is being partially funded by a $1.25 million federal grant to study how it works over the next five years. “It’s kind of an unknown for a lot of people right now and so we want to venture into it slowly and make sure we understand all the issues with it before we move into something like [applying it to all vehicles],” Newell says.

Everybody wants someone else to pay for our roads. Charging motorists a fee for every mile driven is one way to spread the pain equitably as the existing gas tax model will break down completely as more electric cars take to the streets. How long will it be before every new car automatically reports on where we go and when and how fast to the government? Maybe connected cars won’t be quite the nirvana we were hoping for.