In Vietnam’s central region, nearly 150,000 solar panels fan out across 45 hectares (about 111 acres), glistening in the dry, windy heat. Although the landscape is quiet, big changes are underway.

“The sunshine strength is very good in this area,” says Nguyen Van Thien, chief engineer for the TTC Phong Dien solar power plant. “That’s why this plant was established in the central region of Vietnam. In summer the plant reaches 35 megawatts when the sun is hottest from 9am to 2pm.”

The solar plant was built in just eight months and under budget, and it came at a significant time for Vietnam. The country, which has long relied heavily on coal and hydropower, faces a rising demand for energy. Demand in the electricity sector has grown at 13 percent a year since 2000 and is projected to continue to grow at eight percent through 2030.

Renewable energy can contribute to meeting this need – and IFC’s equity investment in the Phong Dien solar power plant aimed to help spur renewable energy production across the country.

To further support renewable energy projects in Vietnam, IFC invested US$75 million in an infrastructure-focused listed green bond, issued by Philippine power company AC Energy. Its goal is to develop up to five gigawatts (GW) of renewables across the East Asia and Pacific region by 2025.

IFC’s support backs selected AC Energy wind and solar projects in Vietnam that total up to 360MW. IFC’s investment anchored the US$300 million green bond, helping to mobilize international and institutional financing for use for AC Energy’s regional projects.

IFC’s advisory services are also supporting rooftop solar projects for commercial and industrial businesses in Vietnam. For example, IFC has identified 60MW of rooftop solar opportunities in a number of selected factories, highlighting the potential in Vietnam’s manufacturing sector. 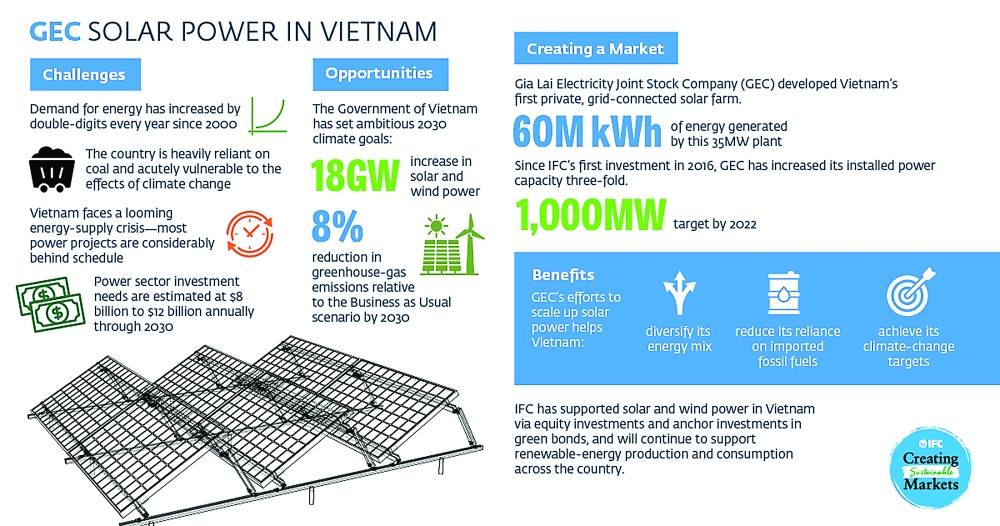 IFC’s investments come at a time when Vietnam is facing a looming power crisis. The government has warned the country could face an annual electricity shortage of up to 12 million megawatts per hour (MWh) by 2023. Shortages could begin as early as next year – and that would exact a toll on lives and businesses.

“Vietnam is a developing country with about 97 million people, so the more the economy grows, the bigger the energy needs of the economy,” says Dang Van Thanh, chairman of the Thanh Thanh Cong Group (TTC Group), which holds a majority stake in GEC.

Thanh was the key driver behind Vietnam’s first privately connected grid solar farm. He met IFC officials in Washington, D.C. five years ago to discuss the promise of solar power in the country. Thanh’s history with IFC dates back two decades.

“We recognized the potential for renewable energy in Vietnam quite early and then saw many advantages in realizing our plan,” Thanh says.

IFC invested in GEC, TTC’s subsidiary, in 2016. GEC then owned and operated a portfolio of 15 run-of-river small-scale hydropower plants and hoped to expand its portfolio. Armstrong South East Asia Clean Energy Fund Pte. Ltd., a private equity fund managed by Armstrong Asset Management, and an existing IFC client, co-invested alongside IFC for about an 18 percent stake in GEC. Thanh remembers creating a strategy of renewable energy development for GEC with a target of 1,000MW by the year 2022. He says GEC expects to install as much as 400MW for solar power by end 2019, and he is optimistic about reaching the 2022 target.

At the time these discussions began, however, Vietnam’s power supply depended on coal and hydropower. Making the shift to renewable energy was difficult because solar costs were high and the government offered no incentives. An opportunity finally arose in 2017, when the government implemented a private sector solar tariff policy. At the same time, the costs of solar PV panels fell, creating the right conditions for GEC to consider solar.

IFC guided GEC throughout the process – building up its corporate capacity, developing and implementing environment and social (E&S) strategies and procedures, and forming an E&S management team to help the company adopt best industry practices and standards in its future energy projects. This included help for screening E&S risks in greenfield initiatives.

Clean energy – such as that provided by the Phong Dien solar power plant -contributes to Vietnam’s national energy supply and helps ensure national energy security. It will also help Vietnam meet the electricity demands of its citizens in the years to come.

That wider impact is important to Thanh, who admits he has a passion for business that benefits others. “Why not do something good for myself, for society, for my business and the country? Why not? ” he says.