he was born and raised in New York, but for Ajaita Shah, it is the hinterlands of India where her life’s work lies. The 34-year-old has created a network of thousands of women entrepreneurs called ‘Solar Sahelis’, along with institutional partners and agri-retailers, to generate employment, encourage sustainable development, and empower rural women in their households and communities. And she’s just getting warmed up.

When Ajaita speaks, one can’t help but remember Shah Rukh Khan’s lines from the 2004 Bollywood film Swades: “I don’t believe our country is the best country in the world, but I do believe that we have the potential and the strength to make our country the best.” Mohan, the protagonist of the film, gives up his life as a project manager at NASA in the US to work in his ancestral village in India to improve the lives of the people there and, in the process, discovers his own life’s calling.

It isn’t very different from Ajaita’s own story. Her parents moved to the US in the early 1980s with their ‘Jaipur-Jain-jewellery community’, which Ajaita refer to as “J-cubed”. The first US-born child in the family, Ajaita had to balance two very different cultures at the same time. 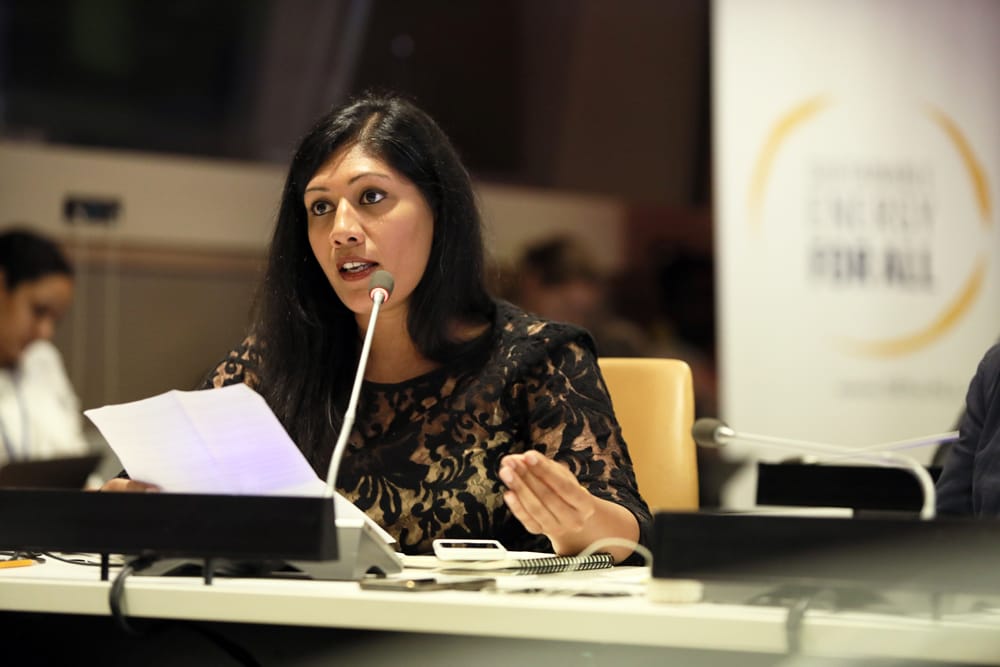 “My American culture taught me to discover, explore, assimilate, embrace diversity, dream big to do big things in life, become a global citizen. My Indian culture reinforced the opposite – stay within your limits, ‘act like a girl’, retain my Indian identity,” says the Jaipur-based entrepreneur. The only dream girls like her were allowed was to marry a good Indian boy and become a homemaker. “Remember,” the voices in her social network said, “You’re a girl; act like one.”

Naturally, this came with conflict, so Ajaita sought out ways to “have it all”. “Whether that was studying abroad, taking internships, or becoming a national debate champion, I knew to balance my reality, I’d need to get good at negotiating, mediation and conflict resolution,” she recalls. While in college, she travelled to Europe to study European Relations with the US during the Iraq War, and went through Mediation and Conflict Resolution training in The Hague.

She also studied in Spain and worked at the Woodrow Wilson Center for International Scholars in Washington DC. “I realized that if I wanted to be a global citizen or a changemaker, I would need to embrace my understanding of culture and history and focus on South Asia, and especially India,” she says.

But the solution was not so simple. India had a rural reality – 70% of India required the grid and better infrastructure. “That struck me a lot – the opportunity to explore social business and tackling the deep challenges of rural India, and using a model that was commercial,” says Ajaita. At 22, she moved to India to understand microfinance. One year became five years of village hopping, living, and learning about the realities, the struggles of rural women and rural households.

“During my visit to different villages, I realized that many of these women were married at 14, had zero exposure to the outside world, were told that marriage is the only future, and that being homemakers is the only option. By the time they turned 30, many already have five children. They often told me, ‘If I had the education, if I had the skills, if I had the opportunity to explore, I would have been different’.” Ajaita Shah in Panel at COP23 in Bonn, Germany

This made Ajaita angry, partly because she could personally relate to it. “Who decides that daughters are not as valuable as sons? What are our societal destinies based on? Clearly not capability, right?” she fumed.

It was Ajaita’s ‘aha’ moment. “Unlike these women, I have the ability to negotiate my reality. I have the education and the responsibility to be something more than what was expected of ‘just girls’,” she decided. But while she was setting up the roots of her social enterprise Frontier Markets (FM), she also had to give in to her parents’ demand for an arranged marriage when she was 25.

The enterprise was successful, the marriage was not, and Ajaita was divorced by the time she was 29. The same year, she made to the Forbes India’s ‘30 Under 30’ list. The accolades followed: she is a 2006 Clinton Service Corp Fellow, 2012 Echoing Green Fellow, and a 2013 Cordes Fellow.

Based in Rajasthan, her social enterprise FM creates access to clean energy products that improve the lives of those in rural households. They do this with their network of rural entrepreneurs who are at the centre of change as rural distributors for these products (now numbering 15), while earning income for themselves and their families. These 5,000 entrepreneurs have been economic drivers for 500,000 households in Rajasthan impacting more than 3.1 million lives. Ajaita (seated left) with her Solar Sahelis, whom she calls her ‘talvaar’. There are 2,500 of them across India.

Simultaneously, they also serve as data miners, mapping customer insights to help FM understand product demands, marketing campaigns, and how to support the network. This has allowed them to introduce efficient new solutions and products to rural households (designed with them, made in India) and achieve last-mile reach over 80 percent of the entire village-level population where they work.

Core to their work is FM’s Solar Saheli program. “Women are highly entrepreneurial. And yet, they are held back due to a severe financing and skills gap that often marginalizes them, to the detriment of their families and communities,” says Ajaita, who has been a speaker at prestigious global forums, including the UN, for climate change and sustainable development.

Now numbering 2,500, Ajaita’s Solar Sahelis are more than just sales agents for FM. “They are market connectors, service providers and changemakers,” says Ajaita, adding that they earn multiple streams of income – from activities and sales of products – which they invest and use for their children’s education and family stability.

Ajaita proudly narrates the story of a Solar Saheli, Kamlesh, from Dholpur, Rajasthan: “She is 29, and has four kids. She has helped over 300 households access solar-lighting solutions, and has taught over 3,000 people how to use a smart phone and connect to the internet. We invited her to Jaipur last year at the Lit Fest to meet the chief minister. Kamlesh was brilliant. After the meeting, she started crying. I asked her what happened. She said, ‘Didi, look at what I am doing here, and it’s so sad to hear the things people are saying in my village.’” 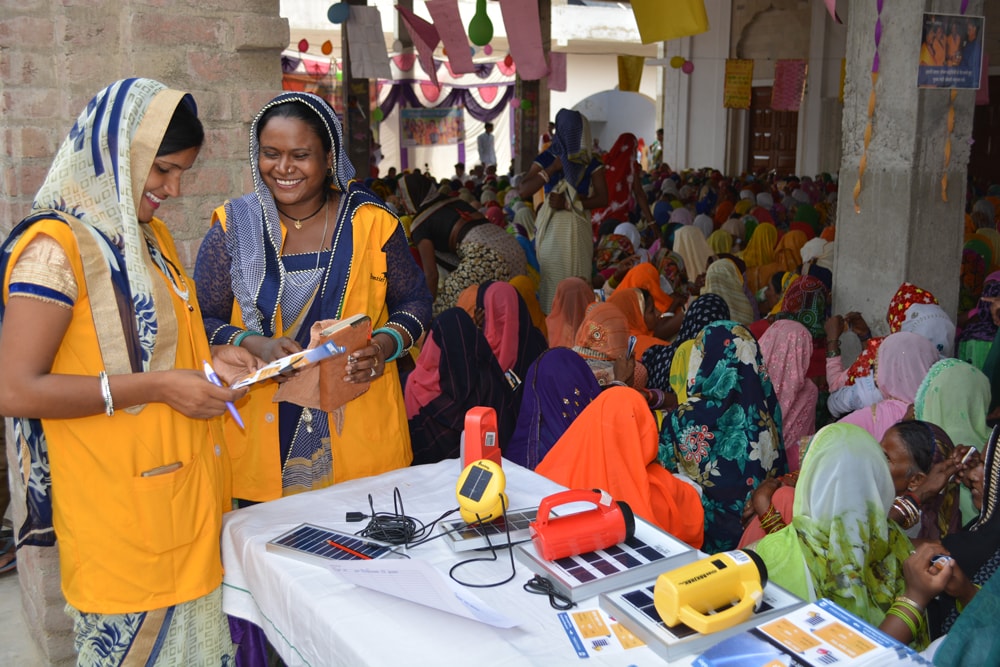 The Solar Sahelis giving a demonstration

On prodding further, Ajaita learnt that when Kamlesh left her village, her brother-in-law spread a rumour that she was coming to the city for prostitution, because in her village, women only leave for Jaipur for that reason.

Ajaita took Kamlesh’s picture with the chief minister, framed it, and gave it to her to show her brother-in-law. When she reached Dholpur, her father-in-law took the photo to the village heads, held Kamlesh’s hand high, and said, “See, this is my daughter-in-law. She has done what none you can ever achieve in your dreams. She is the future.”

At that moment, Kamlesh asked her father-in-law for her reward: To educate her own daughter and marry her only when she was ready. “This is how Kamlesh saved her daughter from child marriage, and started a project to help all Sahelis in her village save their daughters too,” says Ajaita.

They have a 2023 vision of reaching over 20,000 women entrepreneurs and impacting 35 million lives in multiple states of India. “Being an entrepreneur in this market takes time, because the hurdles are greater. And times when things were the hardest – from a divorce, to having a co-founder step away, to getting in a car accident, to government policies like demonetization that kill cash economies overnight – you have to stay grounded and calm, and adamantly continue moving forward. Millions of people now turn to us for help. The work cannot end because of challenges along the way,” says Ajaita.

She credits her team of 50 for helping her evolve as a leader, and her army of Solar Sahelis – she calls them her ‘talvaar’ (sword) – for taking her vision forward. “And now I also have these 500,000 families. How many people can say that they can go wherever they want to in Rajasthan and be welcomed with freshly cooked food and a warm smile? I have been able to create the coolest family ever!” she enthuses.

Ajaita is immersed in her destiny.

tags: How this NRI built an army of ‘Solar Sahelis’ to power villages and empower women
31
previous Maharashtra farmers to get sops for using solar pumps
next Rooftop solar plan hits roadblock as net meters unavailable