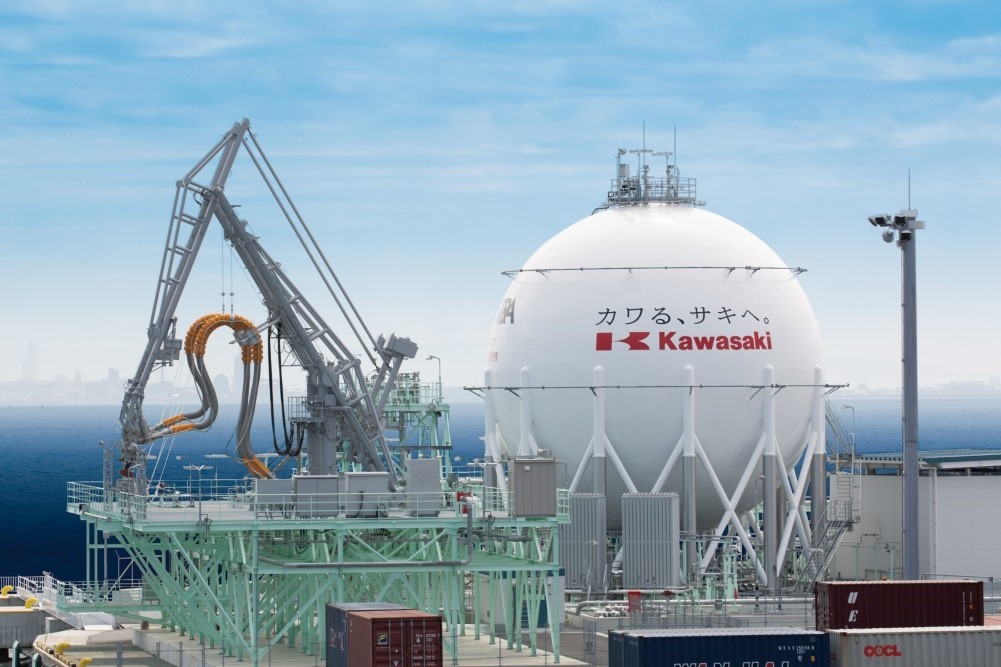 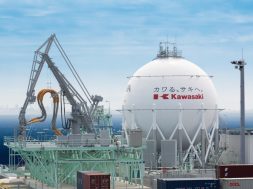 Liquified hydrogen receiving terminal at the time of construction in Kobe

To get a clear view of our planet’s carbon-neutral future, it helps if you’re in Japan.

As renewable-energy efforts to combat climate change ramp up around the globe, Japan’s aggressive goal of carbon neutrality by 2050 applies a full-steam effort to implement innovative ideas and technologies. One of these resources is only starting to reveal its full potential: hydrogen.

In October 2020, the Japanese government declared the goal of realizing a carbon-neutral, decarbonized society by 2050. In light of this mission, the Ministry of Economy, Trade, and Industry (METI) formulated the Green Growth Strategy, a comprehensive industrial policy that promotes research and development to drastically reduce Japan’s greenhouse gas emissions and lead the green industry globally.

Of these 14 Green Growth sectors, one of the most unexplored—especially outside Japan—may be hydrogen.

Hydrogen has historically proved difficult to store in large volumes and to transport long distances. But KHI, with its proprietary liquefaction system and advances in hydrogen innovations, is changing that.

In 1981, KHI became the first Asian company to manufacture an LNG carrier. Since this milestone, the company has become a leader in cryogenic technology for maritime transportation.

Since 1983, the company has developed, manufactured, and operated a liquefied-hydrogen storage tank at the rocket-launch site facility of the JAXA Tanegashima Space Center.

These innovations will lead to safely shipping liquefied hydrogen in large quantities over long distances by sea. In 2019, KHI launched the Suiso Frontier, the world’s first liquefied-hydrogen carrier, which uses proprietary cryogenic technology to keep hydrogen liquified at -423℉(-253℃), 1/800 of its original gas-state volume.

Japan’s New Energy and Industrial Technology Development Organization (NEDO), a national funding agency for research and development, subsidized a HySTRA program—the demonstration project to establish a mass hydrogen marine-transportation supply chain derived from unused brown coal—from FY2015 to FY2020 and is now launching a pilot demonstration to build a hydrogen supply chain, with the goal of its commercialization around 2030.

NEDO also granted KHI a subsidy from FY2019 for “larger size of transport and storage equipment for liquefied hydrogen and development of receiving base equipment.”

Hydrogen represents not only the future of Green Growth, but also its present.

Public education campaigns on hydrogen’s cleanliness and safety have helped residents understand they can lead their daily lives without inconvenience or concerns about this experimental energy source.

Hydrogen’s next applications may be to power heavy trucks, buses, ships, and trains—and, in the following stage of development, to power a greater expanse of the power grid. Japan’s hydrogen strategy targets 2030 for commercializing the liquefied-hydrogen supply chain and using hydrogen for the electric power field.

With the global turbine market expected to reach nearly USD$220 billion (¥23 trillion) by 2050, METI anticipates Japan to lead on hydrogen, with international trade of hydrogen to be nearly USD$52 billion (¥5.5 trillion) annually.

As CO2 accounts for more than 80% of its greenhouse gas emissions, Japan recognizes the importance of transformation for the sustainable future of its socioeconomic structure, industrial structure, and business models through hydrogen and other sectors of the Green Growth Strategy.

Today, Japan is attracting corporate investment and innovation to 14 growth sectors defined in the Green Growth Strategy by offering tax incentives as well as research-and-development funding from its 10-year, USD$18.9 billion (¥2 trillion) Green Innovation Fund. Growth-oriented regulatory measures are under deliberation in Japan’s legislature, the Diet.

By the end of January 2021, more than 70 companies in Japan had declared carbon neutrality. The time is right for companies to join Japan’s carbon-neutral future