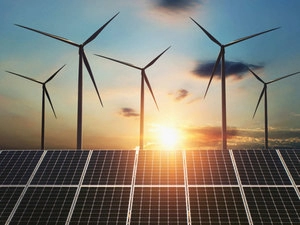 The centre and states are focused on renewable energy like solar, wind, and hydropower. Corporate India is making aggressive renewable power generation capacity expansion plans, the most recent being Reliance Industries’ Rs 75,000 crore investment in the energy business in three years.

Kishore said over the last five years India’s renewable installed capacity has grown at a CAGR of 17 percent and the all India renewable capacity is at about 96 GW excluding large hydro.

“The government target of scaling to 175 GW by 2022 is going to clip because of COVID impact and other issues but the 2030 renewable target is about 450 GW and the required run rate to get over there is about 35 GW a year over the next ten years,” said Kishore, adding that India has till date added capacity at an average run rate of 8.5 GW over the last three years.

Renewable energy is the need of the hour and solar has been the leading renewable capacity addition in the country ahead of wind over the last four years.

“We are optimistic that like the past five years renewable capacity addition in India will grow at mid to high teens CAGR,” said Kishore, adding that leading players in the industry have given growth aspirations.

According to Kishore, this is an exciting time for investors and a huge growth opportunity for them to ride on.

When asked from a profitable point of view, how the renewable portfolio would like for companies and the trajectory of tariffs that have come down, Mitra said, tariffs have come off from the highs of Rs 7-8 per unit from six-seven years to around Rs 2-3 per unit.

“The big change has been because of reduction in capital costs, as well as cuts on the interest rates,” he said, adding that the lower cost of debt is helping renewable companies sustain lower tariffs.

Looking at the renewable target India has set, on average, we would be adding around 25,000 MW of solar on annual basis and 10,000 MW of wind per annum.