Covid-19 contributed in 2.5 years' worth fall in emissions: BNEF report

Investor confidence in the sector has been hammered by mounting execution challenges, policy uncertainty and flawed tender issuance process

New Delhi: The addition of utility-scale solar power generation capacity dropped 46 per cent to a mere 990 Megawatt (Mw) in the fourth quarter ended December 2018 from 1,856 Mw added in the same quarter previous year, according to consultancy firm Bridge to India.

The firm said in its quarterly update report that investor confidence in the sector has been hammered by mounting execution challenges, policy uncertainty and flawed tender issuance process. “Pretty much everything that could go wrong (In 2018), did go wrong,” said Vinay Rustagi, Managing Director, Bridge to India. 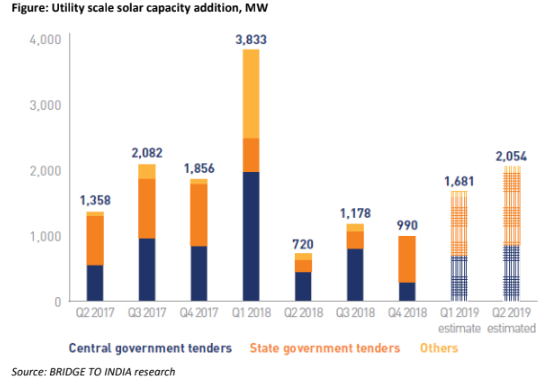 During the full calendar year 2018, Adani (740 MW), Acme (720 MW) and Essel Infra (460 MW) were the top three developers by commissioned capacity. GCL, Risen Energy and JA Solar — all Chinese suppliers — were the leading module suppliers while Sungrow, ABB and Huawei were the leading inverter suppliers. The EPC market was led by Sterling & Wilson and Mahindra Susten.

The report also said that the module prices have fallen to $0.20 per watt, down 44 per cent over previous year but most of this fall has been offset by 25 per cent safeguard duty and 5 per cent GST and more than 10 per cent Rupee depreciation. Moreover, prices are expected to harden in 2019 by 5-10 per cent.

“2018 was an extremely testing year for the solar market. Issues such as safeguard duty and GST created uncertainty for the entire industry, costs went up, execution challenges mounted and to make matter worse, the DISCOMs cancelled many tenders because of unrealistic tariff expectations,” Rustagi said.

He also said that 2019 is expected to be better. “But the new government will have to work hard to re-build investor appetite. Rooftop solar remains a bright spot but even this market has seen some serious policy reversals in the last few months,” Rustagi added.

India’s total installed solar power generation capacity and the capacity in pipeline stood at 28,057 Mw and 17,658 Mw, respectively, at the end of December 2018. This capacity was split between 24,202 Mw of utility scale and 3,855 Mw of rooftop solar projects.