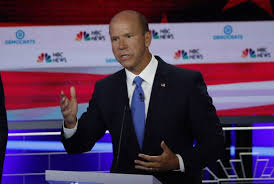 John Delaney: 70% of US would support this climate plan 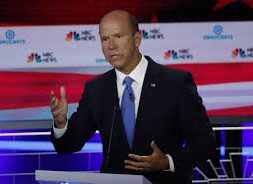 John Delaney: 70% of US would support this climate plan

Former Congressman John Delaney (D-MD) didn’t talk much in the first Democratic debate — but during his 6.6 minutes of speaking time, he pushed for a carbon tax as a way to fight climate change.

Delaney wants to put a fee on carbon emissions and increase that fee every year. The idea is to encourage investment in renewable, clean energies while reducing greenhouse gas emissions.

“All the economists agree that a carbon pricing mechanism works. You just have to do it right,” Delaney said in the debate. “I can get that passed my first year as president with a coalition of every Democrat in the Congress and the Republicans who live in coastal states.”

While not all economists agree, Adele Morris, a climate and policy expert at the Brookings Institute, says there is a broad consensus. Last year, a U.N. report said putting a price on carbon would help in the fight against climate change.

“It’s just so efficient at inducing all the different kinds of ways to reduce emissions,” said Morris.

The idea of a carbon tax has some private-sector support. Last month, more than 70 companies, including PepsiCo (PEP) Nike (NKE) and Microsoft (MSFT) were on Capitol Hill urging lawmakers to tax carbon emissions.

But a carbon tax is a tough political sell.

Voters in Washington state rejected what would have been the first carbon tax in the United States. The Yellow Vest movement in France began as a protest against fuel tax increases.

Australia put a carbon pricing program in place several years ago, but repealed it after facing intense backlash. It now has a program called a “safeguard mechanism,” which requires large polluters to buy carbon credits if they exceed a pollution threshold.

According to the World Bank, more than 40 governments have some sort of carbon pricing initiative.

In the United States, the Republican party hasn’t taken significant action on climate change. Critics argue a carbon tax could lead to job losses and could disproportionately hurt the poor.

Creating incentives to use renewable energy
Delaney acknowledged those concerns, but argues his plan is different because the money would be given back to the American people.

“The carbon tax is a little regressive — meaning it hurts lower-income people more than wealthy people, so when you pay the dividend you’ve got to compensate for that,” said Delaney.

Under his plan, Delaney said every American would collect a dividend from the carbon tax. He says the amount of the payment would vary based on income.

“It goes out one pocket and in the other, but we’re creating incentives for people to use more renewable energy. I think most Americans would say ‘okay, I get that’,”said Delaney. “If you’re kind of a middle-class American you’ll probably get a little more than you paid in increased energy prices.”

Delaney told Yahoo Finance he knows his proposal won’t make “the extremes” on either side of the aisle happy — but he thinks 70% to 80% of the country will support his plan.

“On the far end of the Republican spectrum, they don’t believe in climate change — the problem. So there’s no point talking to them,” he said. “On the other hand, you have Democrats who basically think people shouldn’t fly in airplanes anymore.”

Critics have slammed aggressive proposals like the Green New Deal for being unrealistic —though its supporters say there’s not enough time left to stop climate change with a moderate approach.