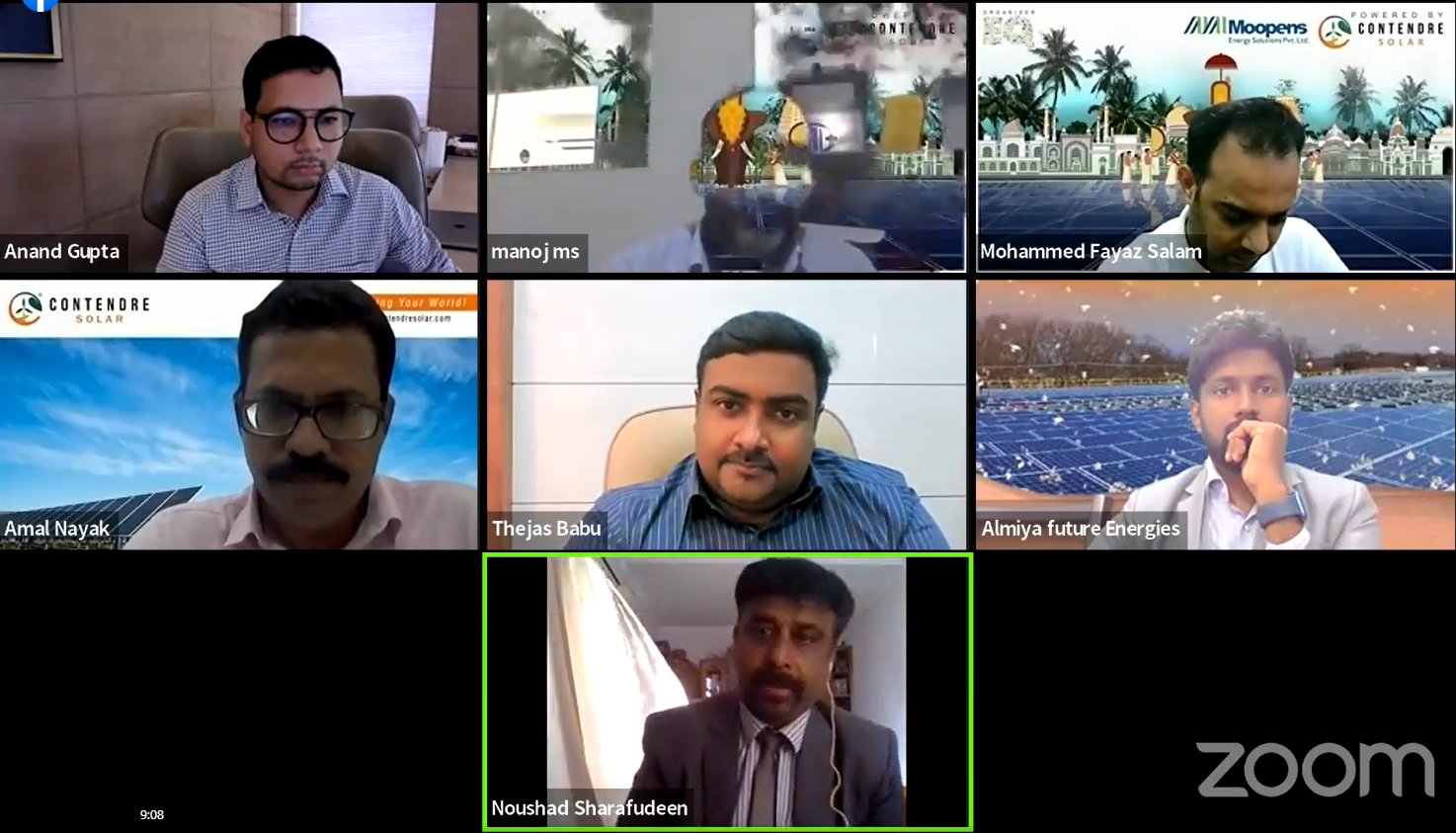 Indian rooftop solar market grew by 1,748 MW, a 53 percent y-o-y increase, in the 12-month period from July 2020 and is estimated to have reached 7,701 MW by end of June 2021, according to renewable energy consultancy Bridge to India. C&I and public sector consumers made up for 72 per cent and 11 per cent of the total market, respectively, while the residential market’s share was estimated at 17 percent.

During a webinar conducted by EQ Magazine on “Kerala Residential Rooftop Solar Market Outlook”, Noushad Sharafaudeen, Nodal Officer, Kerala state Electricity Board, spoke about how Karela state has solely achieved about 600 MW capacity of total solar out of which almost 400 MW was out of rooftop solar.

During the keynote, Mr Noushad also put the light upon the progress that Kerala state is achieving out of rooftop solar along with the challenges faced by the state. While making the panel know about the Amendment Act of the principles of 2003, MNRE and DBT.

He said, “DBT is not something related to solar alone, in fact it is related to all the cases where the government is giving subsidies to the common people. Government policy, this has been extended to the solar scenario or rooftop or the subsidy scenario as well, the two programs will go hand in hand and the government is not going to stop any of this.”

The four portfolios by KSEB were given to MNRE, Dis-Com, Developer and Consumer respectively. Then he concluded by saying how a consumer can register to the app for the benefit of the case and along with that he spoke about the app, SANDESH.

Later in the webinar moderator, Mr Mohammad Fayaz Salam invited the next panelist over the board, Mr Amal Nayak, Vice President, sales and marketing, Contendre Greenergy Pvt Ltd., shared the PPT for the project and also shared the purpose for the same.

He said, “In Kerala opportunities are there but there are also some challenges, price is fixed for EPC companies or the developers. But prices are fluctuating. As a result, the EPC company, they are searching for mainly module suppliers who offer the lowest price, but my concern as a manufacturer or a stakeholder in the industry as a company, we talk about quality. All in all, it is important for the stakeholders, the quality installation. The quality installation and KSEB, the model agencies., they are vigilant for the quality part. He put on an appeal to consider the quality product.”

Next speaker Mr Terance Alex Wattsun, Founder & CEO Wattsun energy showed his concern regarding how customers take the idea of the project.

He added that the rules can also be sent about how things are going to take place.

Later Mr Manoj MS, Managing Director, Soura Natural Energy Solutions India Pvt Ltd joined the discussion mentioning how it was to install solar, a few years back which was then installed in 3-4 months. Now KSEB is growing and is now ramped up to the whole process and we are getting projects commissioned in 3-4 days.

Mr Thejas Babu came up with, “How Kerala residentials have always given priority to the quality of the model. Survival of EPC should also be the concern.”

Then the comments were made by Mr Al Nishan Shahul., CEO – Almiya future energies. He said, “I agree with Thejas Babu regarding the pricing scheme.” He mentioned how dreadful the market can be if certain changes are not applied. He requested for the support from KSEB.

Finally, Mr Noushad Sharafaudeen concluded by commenting on all the queries the panelist had raised and then he added answers to a few more questions that were raised.