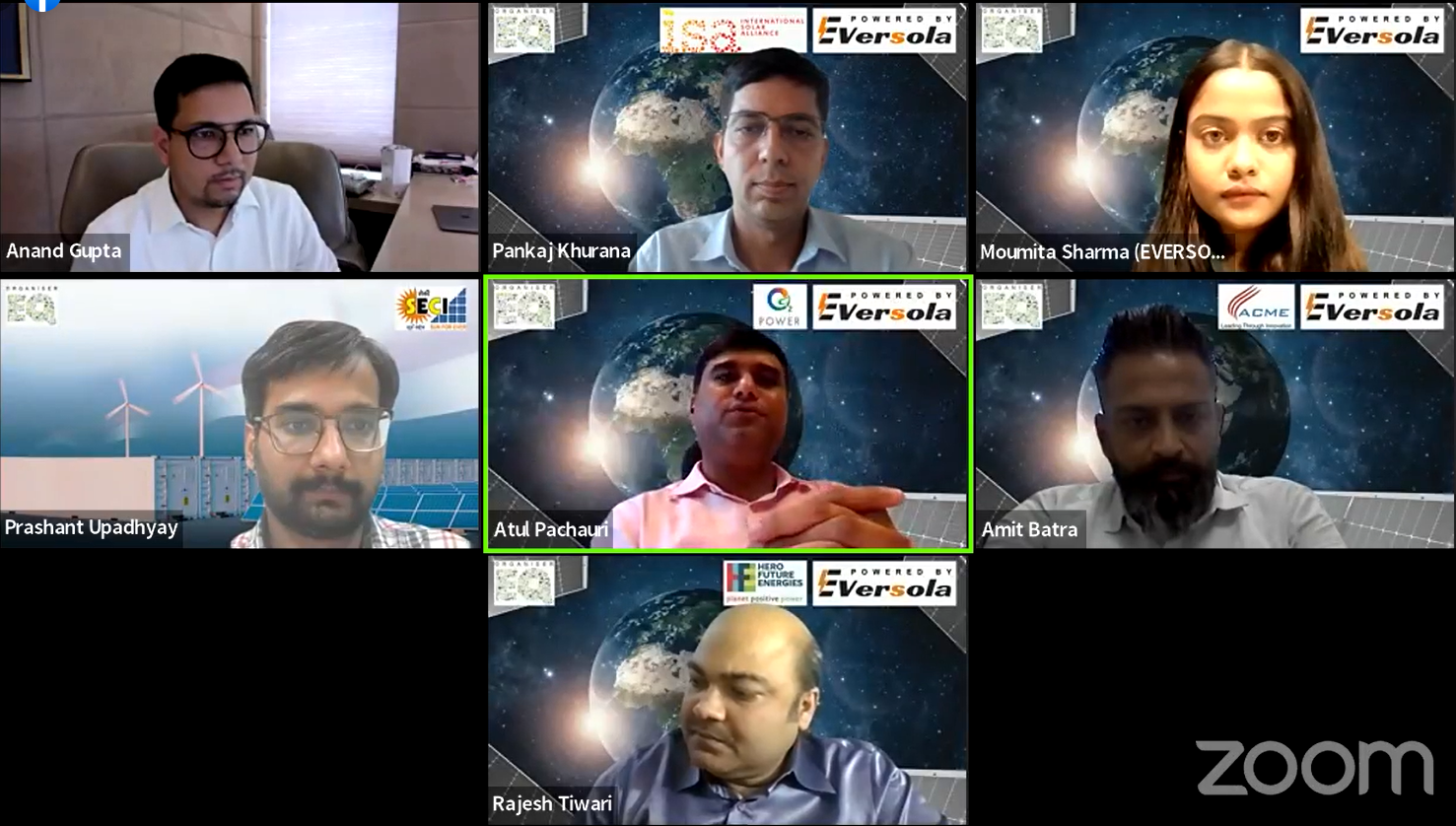 At present the world is entering a new energy crisis, it’s in fact becoming a global village and yet 850 million people are still living without electricity in this evolving world society and business share one critical challenge , How Can We Meet The Energy Demand While Protecting The Environment By Ensuring Access To Clean Energy?

To address the adversity, innovation plays a prime role in building an effective solution and EVERSOLA is one of the solution providers.”

The moderator Atul Pachauri, AVP, O2 Power started the webinar with an amazing note on how he and the company thinks about how OSOWOG has worked when it came into play. He also added how the climate change phenomenon is something to really focus on and then handed over the dais to Mr Pankaj Khurana, Programme Specialist, International Solar Alliance.

Mr Pankaj said, “ONE SUN ONE WORLD ONE GRID was put forth by our honorable Prime Minister Mr Narendra Modi at 1st assembly of International Solar Alliance in October 2018. Later in 2020 MOU was signed between MNRE, Government of India, ISA and the world bank. This partnership will work with the aim of the creation of multisectoral and global collaboration to build an ecosystem of interconnected renewable energy resources.” He then added, “How pandemic was a shock for the present global energy system. The recovery strategies will definitely give opportunities to various countries for making them greener and more resilient. OSOWOG will be giving opportunities for more jobs and of course positively impact the global interdependence.”

He concluded with a brief explanation of GGI as well.

Mr Atul asked Ms Moumita Sharma, Marketing manager, Eversola to present her thoughts, with respect to which she said, “ It’s a great initiative by the Government of India. To eradicate few issues, OSOWOG is a great solution.”

Later on the dais was Mr Prashant Upadhyay, Sr Engineer, SECI. He spoke about the project, “When I was there in the task force to cover a few issues from a diverse perspective. To identify what could be the key steps, in addition to also reviewing or having a look at the reports that are being worked on by EDF. Phase 1 report has recently been finalized and shared with the task force. After the study on the reports it identifies whatever the assumptions were made. There are certain aspects that we always talk about with reference to this scenario which, with the essence of all such traditional interconnections, would essentially be the security, continuity and the quality of energy supply.”

There were few questions raised which Mr Pankaj Khurana and Mr Prashant Upadhyay had a discussion upon.

Next on the panel was Mr C Choudhary, COO renewable energy – Sterlite Power, “I think it is a good initiative by the honorable Prime Minister. I think a similar concept is already driven by China. I think the sun is already available but in different time zones, there is software available where we can do the analysis to stimulate. This initiative is primarily good for the Indian market. This will increase business as well. This policy makes livelihood for the people easy. Job prospects will increase as well.”

Rajesh Tiwari, Hero Future Energies worded for the discussion that, “I feel this has to be a much needed topic. On the technical side, this is a good move. This may be one of the options for RTC because if you see the different latitude, this particular policy is touching upon the different geography of the world. If you have good potential for solar, this policy will be later on identified on which are the good potential areas. We will try to interconnect all these good potential areas all across.”

Later Mr Amit Batra, Head (O&M) – ACME Group said, “It’s a nice initiative. As far as the risk and potential challenges are concerned on this matter, I think we also need to monitor and coordinate between the consumption patterns of the continents based on the availability of the sun and other requirements. Geopolitical situations will also take a role here.”

The moderator, Mr Atul agreed to the concerns.

“We need to keep moving to understand the roads.”

tags: A Game Changer EQ Eversola ONE SUN ONE WORLD ONE GRID Webinar
0