NINGBO, China: Risen Energy’s globalization strategy is starting to show some meaningful results: after several years of effort in the Australian market, the 10MW power station in Northam, Queensland, developed in collaboration with Carnegie Clean Energy, has been connected to the grid.

The project is the first large energy storage facility built by EMC Lendlease, the joint venture between Energy Made Clean, a wholly-owned subsidiary of Carnegie, and Lendlease, an engineering, procurement and construction (EPC) provider. As the module supplier, Risen Energy provided more than 30,000 mono-crystalline modules to the facility.

The modules have been tested by Clean Energy Associates, an American owned and operated global solar PV engineering and quality assurance technical services advisory firm, and are highly adaptable to the local climate conditions in Western Australia in that they can maintain stable power output in hot and dry environments and ensure a high ROI by reducing costs.

The 25-hectare PV power station has now been fully connected to the grid and is estimated to be capable of generating 24 GWh of clean electricity over the next 25 years.

According to the latest data from the China Photovoltaic Industry Association (CPIA), module exports by Chinese PV manufacturers maintained growth during the first ten months of 2018, with the proportion of exports to Australia climbing from 6.0 in 2017 to 10.7 percent. With the industry-leading quality of its products coupled with professional and efficient project development, Risen Energy has not only successfully exported its modules to Australia but also participated in the construction of many large power stations across the country, in full compliance with local standards for project design and development. Among the several projects, Yarranlea, in which Risen Energy played an important role, was specifically pointed out for praise by Dr. Anthony Lynham, Queensland Minister for Natural Resources, Mines and Energy.

Li Bin, general manager of Risen Energy Australia, said, “Our steady expansion in Australia is driven by the company’s innovative products and technologies which can meet the needs of consumers in different regions. Looking ahead, our company plans to invest in renewable energy projects totaling over 2GW in Australia and will continue to expand in the energy storage sector. As for some upcoming acquisitions, we are in the process of seeking financing or EPC partners as well as looking for co-developers.” 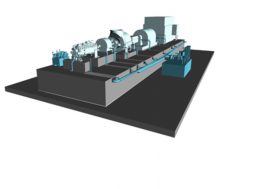