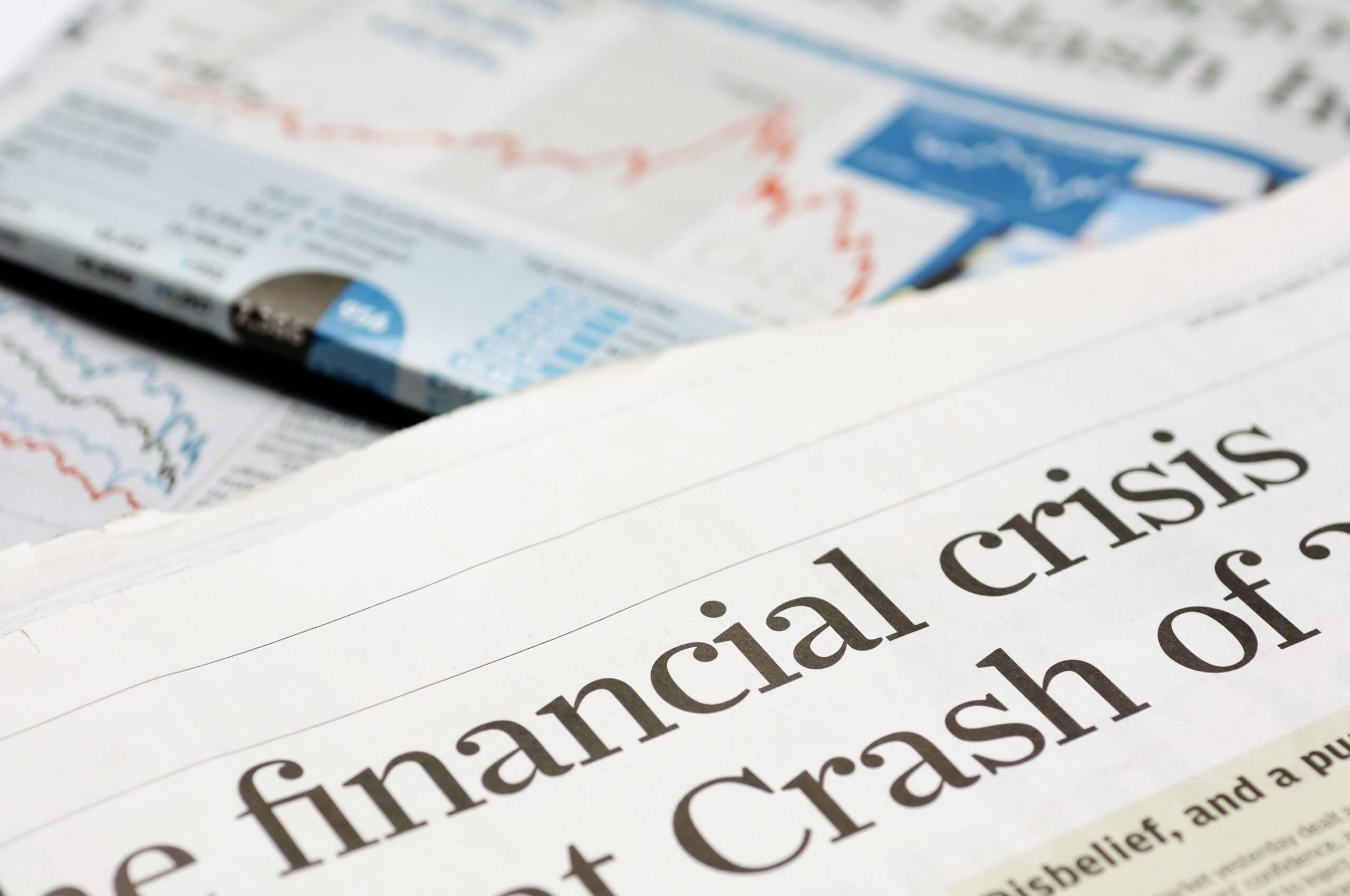 Governments are in uncharted territory as they respond to the economic impacts of the coronavirus pandemic — but that doesn’t mean they can’t learn from the past.

The most recent comparison is the global financial crisis that began in 2007. It was a smaller economic downturn than what we are experiencing today and the world didn’t simultaneously face a pandemic, but at the time, the recession was the worst since the Great Depression. By 2008 and 2009, governments around the world had launched major economic stimulus packages to reboot their economies.

There are important lessons that emerged, especially from the forward-thinking governments that included sustainability projects as part of their economic stimulus packages. A new WRI paper investigates what worked and what didn’t.

After the 2007-09 financial crisis, governments announced about $520 billion for green measures like railways, energy efficiency, grid modernization, renewable energy, and water and waste management. Based on our analysis of 10 major economies, the amount announced for green stimulus spending in response to the coronavirus recession is at a similar level, though the leading countries are different.

In 2008 and 2009, China, the United States, South Korea and Japan spent the most on green stimulus, but all of them have pledged less in response to COVID-19 to date. Meanwhile, economies like the European Union, Germany and France are planning to spend far more on green stimulus now than they did 12 years ago.

If the EU meets its targets for climate spending in its Next Generation EU economic stimulus package, which is currently being finalized, it will amount to more than $265 billion, the largest green stimulus investment in history. 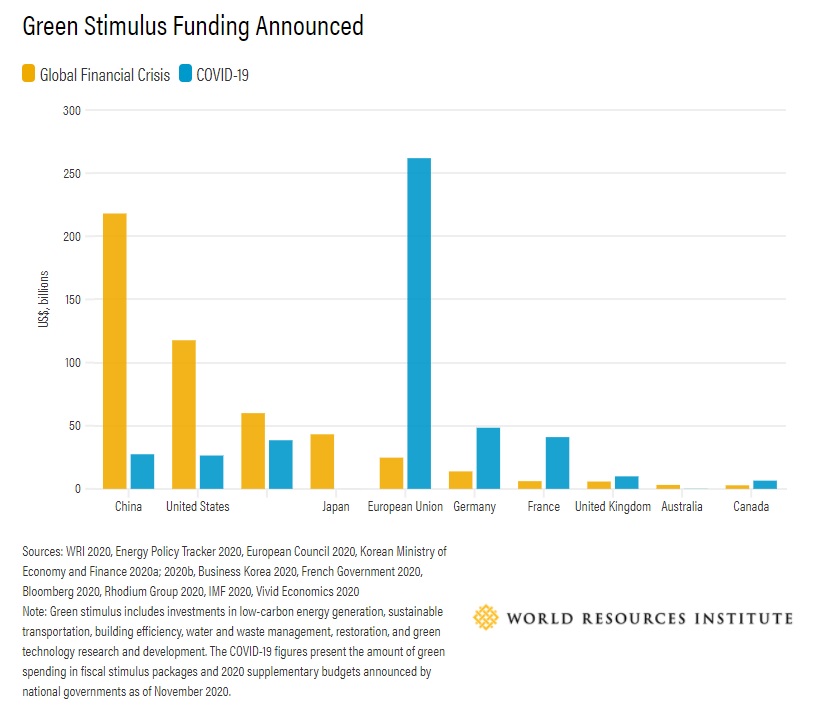 However, even in the leading countries, COVID-19 green stimulus so far is lower as a percentage of total stimulus than it was during the Great Recession, because the overall economic recovery packages are so much larger today. The United States, Japan, the European Union and Germany have all announced stimulus spending in excess of $1 trillion, a mark that no economy met during the financial crisis.

The most disappointing responses are those of the United States and Japan, which have failed to make sustainability a priority. The United States spent 12% of its total economic stimulus on green measures in 2008–2009, including more on renewable energy than any other country. As of November 2020, less than 1% of its $3 trillion coronavirus economic stimulus spending is green. Japan spent 6% of its stimulus on green measures in response to the financial crisis, but so far, essentially none of its $2 trillion coronavirus stimulus is green. 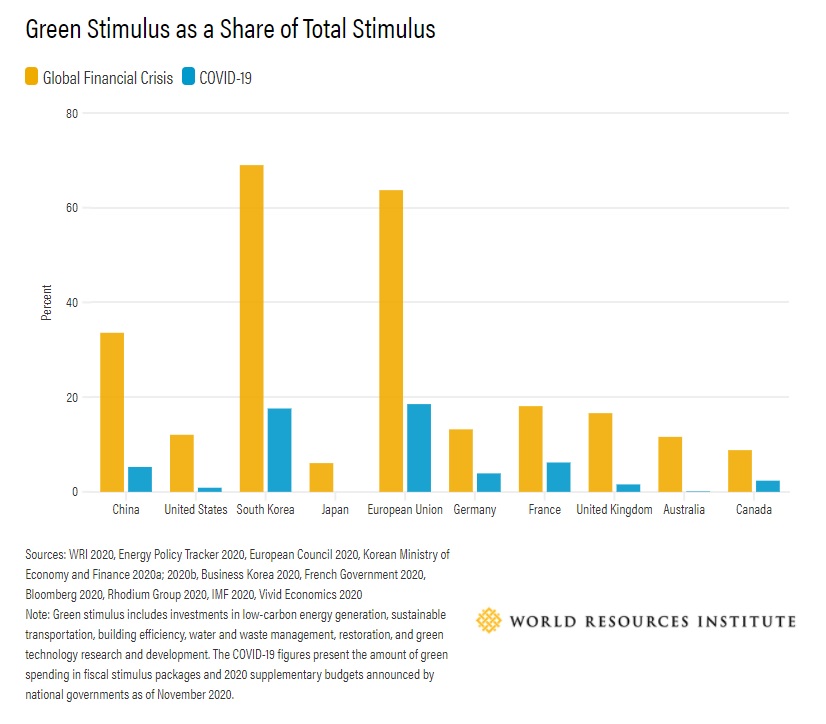 In some ways it is understandable that a smaller proportion is being directed to green measures for COVID-19, because so much of the spending has been focused on essential emergency responses like healthcare and unemployment payments. However, about 30% of the total stimulus is going to economic sectors that will have a large impact on the environment — and unfortunately, in the majority of countries, that spending is expected to have a negative impact. There is still plenty of room for green investments that will create more jobs and lay the foundation for a healthier, more prosperous future.

Evidence shows that countries that invested the most in green stimulus in 2008 and 2009 successfully created jobs and boosted their economies, although in some cases recovery was more difficult or slower than expected.

The U.S. economic stimulus supported 900,000 job-years (full-time jobs over one year) in clean energy fields from 2009 to 2015. South Korea’s green stimulus helped it recover faster from the economic crisis than expected and directly created 156,000 new green jobs from 2009 to 2011. In the European Union, each $1 in green investment boosted GDP by up to $1.50 across the region. In China, rapid investment in railways, grid networks and other green initiatives gave a large and immediate boost to GDP — around 4.2% above the baseline in 2009 and 3.6% above the baseline in 2010.

In the longer run, investment in clean energy manufacturing and research helped countries build up competitive new industries after the financial crisis. China, the United States and Germany became renewable energy leaders in part because of programs coming out of the Great Recession. China’s solar PV manufacturing capacity increased by a factor of 20 between 2007 and 2011. In the United States, the share of wind turbine equipment manufactured domestically rose from 25% in 2006–2007 to 72% in 2012.

Why Green Stimulus Succeeds or Fails

After the Great Recession, some countries were able to spend their green stimulus quickly, while others took many years. South Korea was especially speedy in the distribution of its green stimulus; almost 20% of the funds were disbursed by mid-2009, compared to only 3% for most countries.

Not all the announced spending ultimately materialized in some countries because governments rescinded the funds or projects encountered delays. For example, while the United States eventually spent 89% of the green stimulus that it initially allocated, Australia spent only 34%.

Some projects, like renewable energy incentives or building efficiency retrofits, were better able to hit the ground running. Highly complex projects like high-speed rail or carbon capture and storage proceeded more slowly or were cancelled. Even the same types of programs could fail or succeed depending on how they were implemented.

In Australia, a home retrofits stimulus program was cancelled due to a poorly regulated rollout, use of efficiency technologies that were not suitable for all homes, and safety issues. Meanwhile, the United States had success with home retrofits because it funneled spending through existing programs and provided comprehensive retrofit options that could be tailored for individual home needs.

In 2010 alone, the U.S. Weatherization Assistance Program directly and indirectly supported 28,000 jobs and reduced carbon emissions by 7.4 million metric tons — the equivalent of taking about 1.6 million cars off the roads for a year.

As stimulus packages are implemented as part of coronavirus economic recovery efforts, it’s worth asking whether governments will fully disburse their green commitments. A lack of transparency in many countries after the global financial crisis made it difficult to hold governments accountable for their stimulus decisions. And some of the projects were not as green as they appeared, including China’s funding for rail and grid infrastructure that supported coal use, or a river restoration project in South Korea that built new dams and had questionable environmental impacts.

Green Stimulus Alone Is Not Enough for Decarbonization

While green investments in 2008-09 did help stimulate the economy, their impact on greenhouse gas emissions remains unclear. Global emissions fell in 2009 due to the recession but rebounded strongly after the economic recovery and continued to climb upward for years. Although this sounds discouraging, it is possible that the emissions trajectory would have been even worse without the green spending. There has been some limited research suggesting that in countries that spent the most on green stimulus, the new low-carbon infrastructure that was built would improve energy efficiency in the longer-term compared to expectations.

While it’s hard to pin down the GHG emissions impact of the green stimulus spending after the Great Recession, it’s clear that there was a lack of reforms to other parts of the economy that incentivized emissions. Although fossil fuel subsidies fell during the recession, they rebounded strongly afterward, despite a G20 pledge to phase them out. Between 2008 and 2013, the world spent 6 times more on fossil fuel subsidies than on renewable energy subsidies. 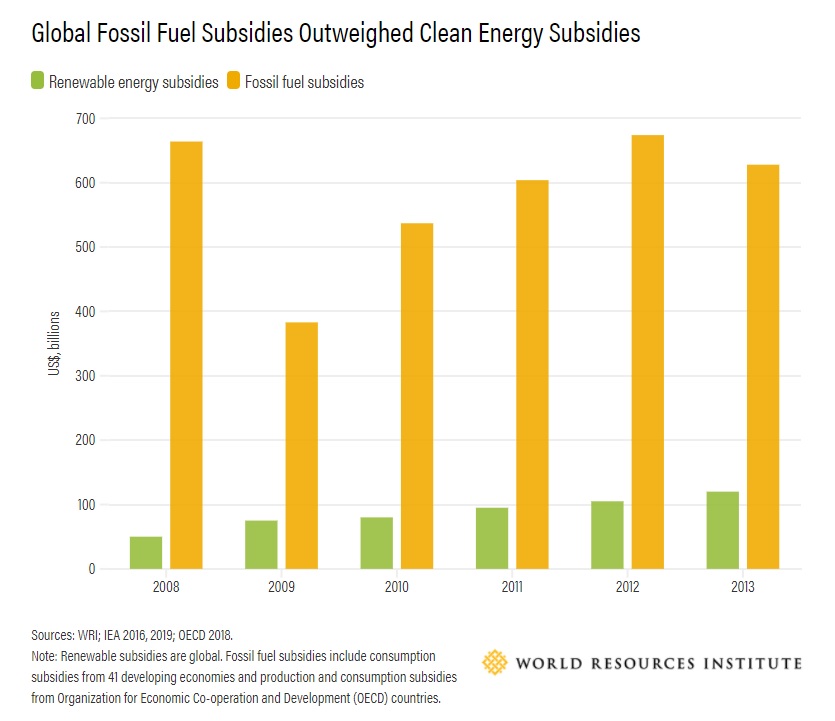 How to Ensure Green Stimulus Succeeds for COVID-19 Recovery

There’s still time for governments to change direction in future waves of coronavirus economic stimulus spending, or to adjust their current packages as they are implemented. In the United States, the incoming Biden administration may have an opportunity to introduce new green stimulus spending, and Japan has indicated its next recovery package will focus on shifting to a green society.

Governments can deliver more jobs and stronger, more resilient growth by increasing the shares of their coronavirus economic recovery packages that are going to climate-friendly measures. Keeping in mind the lessons of a decade ago, governments should focus on projects that can scale up quickly, avoiding untested technologies and more complicated infrastructure projects. They should clearly define what projects are considered to be green and increase transparency. Finally, they should accompany economic stimulus plans with other policy changes, like phasing out fossil fuel subsidies and use, introducing carbon pricing, and setting emissions targets and standards. Together, these strategies will enhance the effects of green spending and help governments to deliver the jobs and income their economies need.