One of the world’s biggest investors in renewable energy sees a growing opportunity in offshore wind projects.

More certainty from governments about future regulation and the expansion of new floating technology could drastically broaden the opportunities for investors, according to Mark Dooley, global head of Macquarie Group Ltd.’s Green Investment Group.

“I love offshore wind. We get to write big checks,” Dooley said in an interview at the firm’s London office. “It’s an enormous game and governments are making seemingly higher and higher assertions about how much they’re going to get built.”

The global offshore wind market’s generation capacity will soar to 177 gigawatts in 2030 from about 22 gigawatts in 2018, according to Bloomberg NEF data. That works out as a compound annual growth rate of 19%. 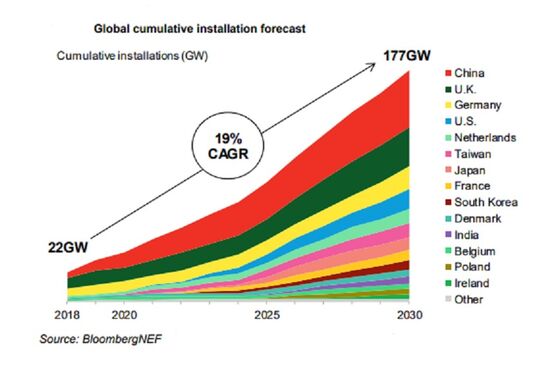 GIG was formerly known as the Green Investment Bank, which was set up by the British government in 2012 to speed up the nation’s switch away from fossil fuels, backing projects such as wind farms and biogas plants. It sold the bank to Macquarie for 2.3 billion pounds ($2.8 billion) in 2017.

Since then the firm has expanded its portfolio around the world, putting 20 billion pounds ($24.6 billion) into projects across several green technologies. In August, GIG bought a 40% stake in the 714-megawatt East Anglia One wind farm owned by Spanish utility Iberdrola SA. The group has 20 gigawatts of green power capacity in its development pipeline, according to its progress report published Thursday.

But developers and manufacturers need more clarity about how governments plan to regulate renewable energy to deliver on ambitious decarbonization goals, Dooley said. That would help investors allocate a growing pool of capital.

“Generally I’m impatient with governments saying that what they can get done is constrained by how much investible cash the private sector can bring,” Dooley said. “That’s generally nonsense. There’s so much money looking for well-structured assets in the infrastructure and energy space, particularly renewable energy.”

Another major opportunity in waiting is how new offshore wind technologies will develop.

“There’s a bit of an elephant in the room in offshore wind in terms of floating offshore wind,” Dooley said. “In the next few years somebody’s going to crack it.”
Floating wind turbines could open up development in areas where the water is too deep for today’s offshore wind technology.

France plans to auction in 2021 a contract to buy 250 megawatts of power from floating offshore wind. That kind of state support could help drive down costs, Dooley said.