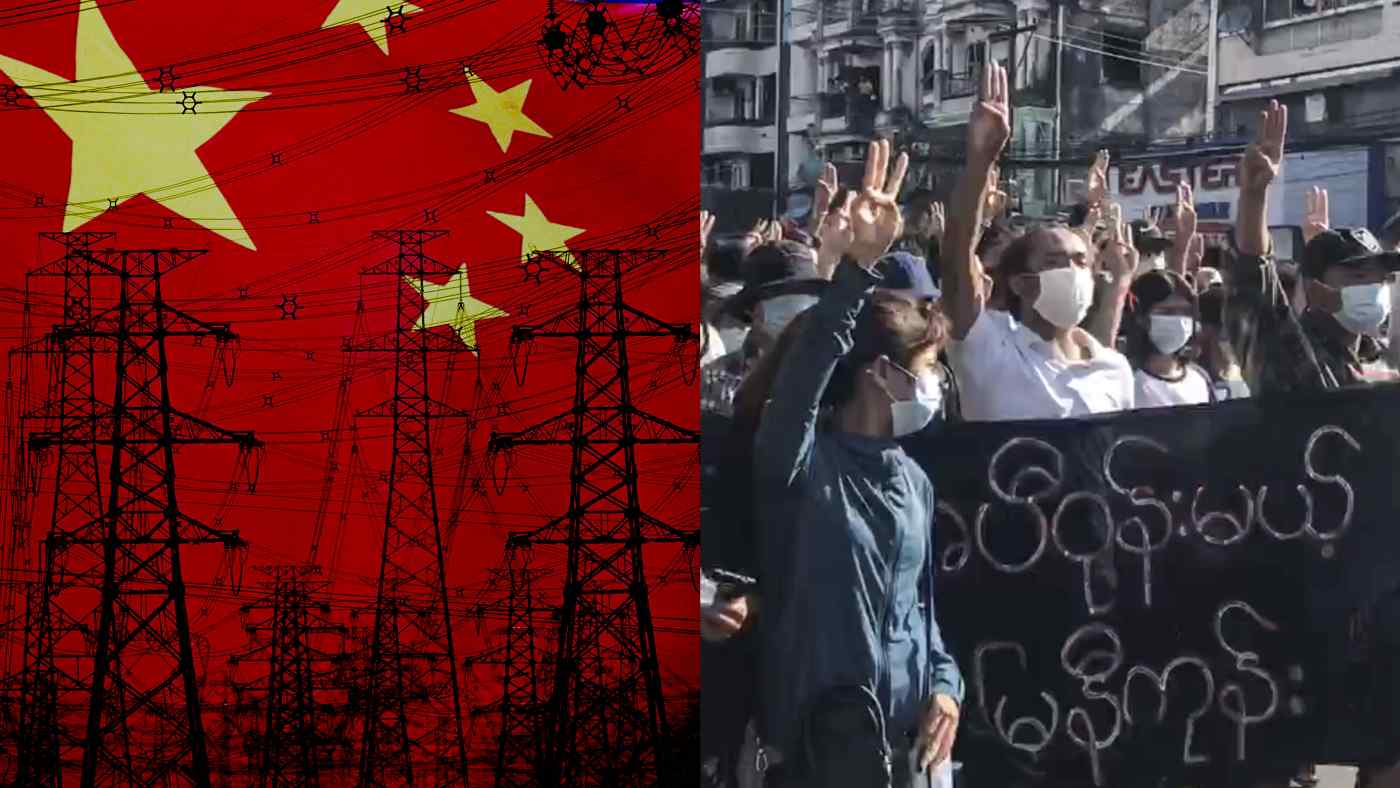 Hong Kong-listed VPower under fire for business with military companies.

TAIPEI/YANGON : Chinese energy companies contracted to build power plants in Myanmar have had their projects put on hold, and some are considering exiting the market, in a sign of how the military coup in the Southeast Asian country may be deterring even thick-skinned Chinese investors.

Projects taken up by Chinese state-backed liquefied natural gas and solar energy companies would have been difficult to implement even before the Feb. 1 military takeover, insiders say. Now the coup has further complicated matters.

The companies, which secured their bids under the ousted government of Aung San Suu Kyi through two contentious tenders, are back in the spotlight. One large contractor has been identified by human rights campaigners as doing business directly with the military.

Hong Kong-listed VPower, which won four out of five liquefied natural gas and gas-fired power plant projects in Myanmar’s 2019 emergency tender, has been shown to be leasing military-owned land.

Rights groups have turned up the pressure on foreign businesses that continue to deal with the military, which has killed more 750 civilians since Gen. Min Aung Hlaing overthrew the civilian administration in the coup.

Even as Japanese brewer Kirin and Singaporean tycoon Lim Kaling announced plans to cut ties with military entities within days of the coup, VPower and others appear to be moving forward with deals.

The company has built a $297 million 350MW LNG plant. Documents also show that the VPower consortium and MBCG formed a joint venture called MCV Terminal on Jan. 21 last year to build the country’s first gas terminal and regasification facilities, which are already online.

A key figure in VPower’s deals with the Myanmar military is Tun Min Latt, son of retired Lt. Col. Khin Maung Latt. He was named in a 2019 United Nations Fact-Finding Mission report on the military’s economic interests as a private shareholder in the Star Sapphire Group of Companies.

The report showed the conglomerate was one of 45 companies, together with MEHL and another military-owned conglomerate, Myanmar Economic Corporation (MEC), that made donations to the military after its “clearance operations” drove over 700,000 Rohingya Muslims into exile in Bangladesh from Myanmar’s southwestern state of Rakhine.

U.N. investigators found that the donations went to finance development projects in Rakhine that furthered the military’s objective of “re-engineering the region in a way that erases evidence of Rohingya belonging to Myanmar.”

Myanmar’s company registry showed Tun Min Latt was made a director of MCV Terminal in January, although he stepped down as an MBCG director after the coup.

What is more worrying, according to the activist group Justice For Myanmar, which documents military-linked financial matters in the country, is that the project will be transferred to MEHL after between five and 50 years under a build-own-transfer contract.

“As well as lease payments to MEHL, VPower has developed a gas terminal and regasification facilities that will be transferred to MEHL on completion of the investment, providing a long-term source of revenue to MEHL,” said Yadanar Maung, spokeswoman for Justice For Myanmar.

“We call on HKEX [Hong Kong Stock Exchange] to take regulatory action against VPower to urgently clarify VPower’s material support for the Myanmar military through MEHL, a sanctioned entity that is in violation of international human rights and humanitarian law,” she added.

The U.S. government on March 25 announced sanctions against MEHL and MEC, with Secretary of State Antony Blinken citing the Myanmar military’s refusal “to disavow the coup and [continued] violence against peaceful protesters” as the reason for the move.

VPower holds a director’s seat on the Myanmar-Hong Kong Chamber of Commerce and Industry. Its army deals raise fresh questions about the chamber, which has pledged to promote responsible investment.

VPower, HKEX, and the chamber declined to comment. A spokesperson for VPower previously publicly denied having dealings with MEHL or MEC in an interview with a Hong Kong media outlet. Justice For Myanmar accused VPower of “misleading its shareholders.”

There are larger implications for Myanmar’s power sector: Foreign investors are questioning whether to proceed with projects, concerned over the military’s ability to honor power purchase agreements (PPAs), according to a Yangon-based foreign executive familiar with the industry.

Energy companies’ revenue streams in Myanmar come from PPAs with the government. “Ultimately, their commercial considerations depend on their evaluation of the political risk, and whether banks, who are even more sensitive to risks, would continue to finance their projects,” the executive said. He said the key is stability, not who is in power. “As long as the PPA [is] honored, they would commit to the projects.”

To meet Myanmar’s growing appetite for energy the National League for Democracy government issued emergency power tenders in 2019. Four out of five were awarded to a VPower-led consortium with Chinese state-owned China National Technical Import and Export Corporation (CNTIC). The Hong Kong-listed company is partially owned by the Chinese state-owned CITIC and CRRC.

Three new power plants in Yangon have been operating since last year, while a fourth in Kyaukphyu meant to operate under the VPower-CNTIC consortium on the western Rakhine coast is on hold, according to a Myanmar-focused energy analyst.

These four plants were to add 930MW of generating capacity, or about 20% to 30% to Myanmar’s total. The energy analyst says the VPower-CNTIC consortium is negotiating to scrap the LNG project in Kyaukphyu.

Solar power developers who won a controversial solar tender last year under the NLD government face a similar situation. Chinese companies and consortia were awarded 28 of the 29 projects, but only six had been approved by the Myanmar Investment Commission before the coup, making it impossible for the developers to begin generating power by the original 180-day deadline.

No PPAs have been announced publicly, and negotiations are likely to have stopped, according to Katie Patterson, an energy analyst with FMR Research and Advisory. The outlook for the solar projects is “bleak,” she said. “Unsurprisingly, there have been some reports that the firms involved are considering dropping the projects.”

Two senior corporate sources confirmed to Nikkei that junta-appointed officials from the Ministry of Electricity and Energy met solar developers in February and asked them to pause the projects, presumably because of disruptions by the Civil Disobedience Movement, which opposes the coup.

The Myanmar Investment Commission announced 10 approvals of foreign investment projects in March, saying some involve Chinese investors, and include the electricity sector, without identifying individual projects.

Lin Tun of local solar developer Quasar Resources, which also took part in last year’s solar tender but was outbid by the Chinese, said the original investment conditions were difficult, even before the latest political instability.

For example, several developers Nikkei spoke to said the 180-day deadline was very tight. The military takeover has triggered upheaval across the country. “Nobody is going to be crazy enough to lend money or start building [these projects],” Lin Tun said.

Chinese companies, expecting solar panel costs to drop over time due to technological advances before the coup, “underbid” to win the tender, he added. “They will have to renegotiate the terms with the government … otherwise there will be hardly any return.”

Chinese companies and their local partners did not respond to Nikkei’s request for comment.

With two nationwide blackouts since the coup, people and businesses in Myanmar have raised concerns about the risks of an imminent power shortage, especially after local media outlet Frontier Myanmar reported that up to 80% of electricity ministry staff are participating in the civil disobedience campaign.

Although the earlier blackouts were caused by technical failures that occurred frequently before the coup, strikes have inhibited the electricity ministry’s ability to collect payments for electricity bills, reducing the ministry’s revenue.

A person in the industry in Yangon told Nikkei that the decline in revenue would probably cost the ministry “hundreds of millions of dollars.”

Meanwhile, a sharp drop in electricity demand due to COVID-19 and the civil disobedience campaign means the power supply is not an immediate concern. But with the monsoon season arriving soon, repairs to power lines needed because of the weather or equipment failures may suffer if employees are not working.

Analysts and industry insiders agree that major power outages are unlikely in the short term, due to the decline in demand stemming from COVID-19 and the civil disobedience campaign, but political instability and international sanctions could make it harder for the junta to keep the country running over the longer term.

“The generals are putting all their focus on the political situation now and have not turned towards Myanmar’s energy sector,” the person in the energy industry said.

Romain Caillaud of Tokyo-based advisory company SIPA Partners said in the longer run, large energy projects are likely to slow down, if not face cancellation, as the risks have “shot through the roof.”

“The legal and regulatory framework for the energy sector was already difficult pre-coup, now Myanmar will have to pay a significant risk premium to convince foreign investors,” he said.