The implementation of wind energy projects in Madhya Pradesh has slowed down this year as the state government is not signing any fresh power purchase agreements (PPAs), say sources. An official of a leading wind power generation company, speaking on condition of anonymity, told HT that wind energy projects worth hundreds of megawatts were in the pipeline in MP but the implementation has been delayed as the government was not signing any fresh PPAs. Major companies such as Suzlon, Inox, Windworld and Renew Power are setting up wind farms in the state.

MP took a big jump in installed wind energy capacity by adding 1,261 MW in 2015-16 while solar capacity addition was relatively lower at 211 MW, shows data obtained from state new and renewable energy department. However, the trend is likely to reverse in next two years with four new solar parks of 500 MW capacity each and an ultra mega solar power project of 750 MW coming up in Rewa. State principal secretary (new and renewable energy department) Manu Shrivastava said that PPAs have not been signed this year as MP Electricity Regulatory Commission (MPERC) is yet to issue a RPO (renewable purchase obligation) on how much power can be purchased through renewable energy. He denied that PPAs for wind energy projects are not being signed because of fall in solar power tariffs.

The regulatory commission in each state mandates a certain percentage of electricity generated to be from renewable sources each year. RPO is the obligation mandated by central and state regulatory commission and is applicable to distribution licensee power distribution companies (DISCOMs).
“Last year in MP it was 1% (of total power purchased) from solar and 6% from wind energy,” Shrivastava said. Some big wind energy projects are yet to take off in MP. As per the data available, about 4,500 MW of wind energy capacity is in the pipeline in the state. 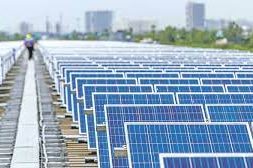