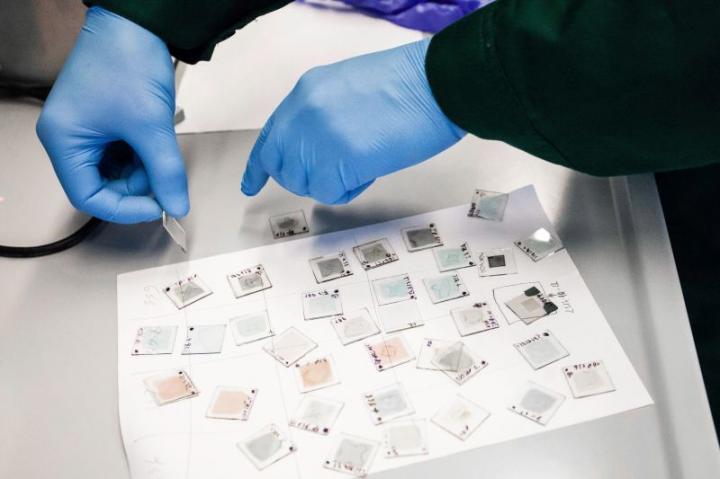 Organic solar cells are made of common organic elements such as carbon, hydrogen, nitrogen, fluorine, oxygen, and sulphur. Their raw materials are cheap, abundant, and can be easily recycled.

Although the organic photovoltaic (OPV) elements are lighter, more flexible and cheaper to produce, their efficiency still falls behind that of other photovoltaic technologies, including silicone, perovskite and tandem solar cells. And yet, this aspect may soon change.

At the end of 2018, a group of Lithuanian chemists from Kaunas University of Technology synthesised a material, which self-assembles into a molecule-thick layer, aka monolayer, can cover a variety of surfaces and function as a hole-transporting layer in a solar element.

Until recently, the self-assembling monolayers (SAMs) have been used to produce record-breaking perovskite/silicon and CIGS/perovskite tandem solar cells.

However, the technology also proved very efficient – reaching nearly record-breaking 18.4 power conversion – when used in an organic solar cell, produced by the group of researchers headed by Professor Thomas Anthopoulos at the KAUST University in Saudi Arabia.

“We made some modifications in the material used in SAM formation to tailor it for organic solar elements. However, our technology, offering a breakthrough approach towards photovoltaic elements’ production remains the same: the surface is dipped into a solution and a molecule-thick semiconductor layer is formed. The technology is cheap, efficient and versatile”, says Dr Artiom Magomedov, the co-author of the invention.

As the materials synthesised by KTU chemists are now commercialised and freely available in the market for research groups and companies all over the world, the discovery continues to advance the development of photovoltaic technologies.

“Last year, we noticed an article published by the researchers from KAUST, where they described the achieved very high efficiency of an organic solar cell while using our SAMs.

We contacted the scientists and offered to collaborate in enhancing the capacities of the material. Due to the pandemic restrictions, all cooperation was remote – we sent the synthesised materials by post and our colleagues in Saudi Arabia built the organic solar cells and measured their properties”, explains Dr Magomedov.

The organic solar cell using Br-2PACz molecule-thin coating as a hole-transporting layer achieved a power conversion efficiency of 18.4 per cent, which is currently among the highest in OPV technologies.

Moreover, the electrode constructed was chemically stable, and after removal of the SAM, it could be recycled and reused to construct fresh highly-performing OPV cells.

The researchers emphasise that the use of similar SAMs could be potentially extended in other applications including light-emitting diodes, photodetectors or organic transistors.

According to Dr Magomedov, all different solar technologies, which are currently being developed, will find their niches in the market – as OPV cells are lighter, can be made transparent and flexible, can be used for charging drones, household electronics, for indoor photovoltaics. Currently, no OPV elements are mass-produced.

“The semiconducting properties of organic elements are lower than those of non-organic materials. Therefore, the achieved efficiency results are very impressive for everyone working in the field.

After the publication, a Swedish company “Dyenamo” has already obtained the licence to produce our materials tailored for the organic solar elements, as they see the potential of this technology”, says Professor Vytautas Getautis, the Head of the KTU research group behind the invention.