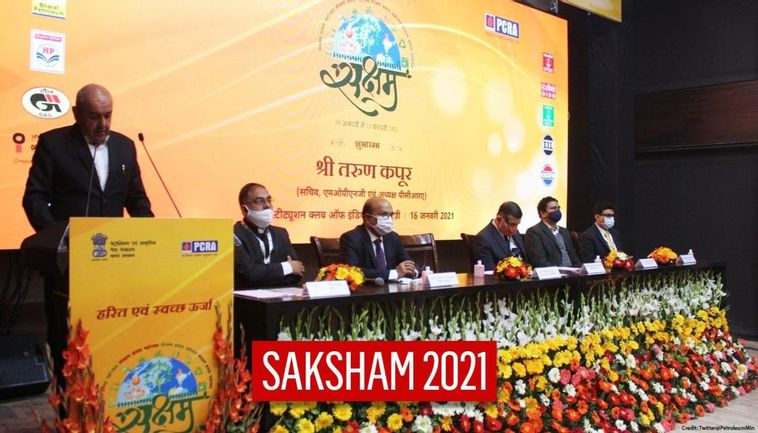 The Ministry of Petroleum and Natural Gas launched a month-long fuel conservation campaign of the PCRA, ‘SAKSHAM’ aimed at reducing fuel consumption in India

The Ministry of Petroleum and Natural Gas on Saturday launched a month-long fuel conservation campaign of the Petroleum Conservation Research Association (PCRA) named SAKSHAM 2021. The campaign aims at highlighting the adverse health and environmental impacts of increasing carbon footprints and convince consumers to switch to cleaner fuels.

As a part of the campaign, various activities such as cyclothon, farmer workshops, seminars, painting competitions, CNG vehicle driving contests, etc are held across India to spread awareness among the masses about the advantages of using clean fuels.

The key drivers include leading towards a gas-based economy, cleaner use of fossil fuels, greater reliance on domestic sources, achieving renewable targets within the set deadlines, increased use of electric vehicles to decarbonize mobility, increased use of cleaner fuels like Hydrogen, and digital innovation across all energy systems.

Speaking on the occasion, Petroleum Secretary Tarun Kapoor praised the energy companies for adopting fuel conservation measures and diversifying into clean and green energy ventures. He said that initiatives like Saksham help in reducing fuel consumption and adoption of energy efficiency measures, thus leading to better lives, a healthy environment, sustainability, and development of the country.

Kapoor said all the energy companies are now part of the transition to fuels that are clean and leave very less carbon footprint. He stressed upon the need for energy conservation as India’s energy demand grows and called on leveraging technologies and digital innovation to achieve the twin goals of energy efficiency and sustainability as we move forward.

The Secretary gave awards to the oil companies and their state-level coordinators for contributing to the fields of fuel conservation. He also presented Award for the “Best performance in PAT Cycle-II for Refineries.”

Last year’s edition of SAKSHAM witnessed the participation of nearly 1.48 crore school children in PCRA’s flagship National Competitions. Almost nine crore people were directly reached through about 47,000 programs across the country in the month-long event.