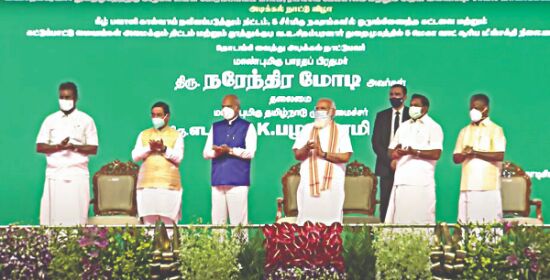 While addressing the gathering after dedicating the 1000 MW lignite based Neyveli New Thermal Power Station (NNTPS) and 709 MW Solar Power Projects of NLC India Limited, Prime Minister Narendra Modi stressed the need for uninterrupted power supply for Industrial Growth and expressed his happiness in dedicating two major power projects of NLCIL, one 1000 MW (2×500) Lignite based Thermal Power Station in Neyveli at a cost of Rs 7,800 crores that supply over 65 per cent of its generated capacity to the state of Tamil Nadu and the 709 MW capacity Solar Power projects of NLCIL at a cost of over 3000 crores in the Districts of Tirunelveli, Ramanathapuram, Virudhunagar and Thoothukudi of Tamil Nadu, the sole beneficiary.

He lauded NLCIL for completing these projects that energise the state and realize the “National Solar Mission” and Government’s Mission of “Power to All”.

While addressing, Pralhad Joshi, Union Minister of Parliamentary Affairs, Coal & Mines complimented NLCIL for doubling its Mining capacity in three years and increasing the power generation capacity by 65 per cent in the last six years. He appreciated NLC India in inducting 750 contract workmen into regular roles of the company this year and completing two Wage settlements benefiting 9000 regular workmen and 15000 contract workmen.

He praised NLCIL on making a huge foray in renewable energy sector by becoming the first CPSE to achieve 1 GW capacity in solar and for the 1000 MW Thermal Power Station at Neyveli having two lignite-fired units of 500 MW each, the first of its kind in India with state of art environment friendly Ash Handling System designed for 100% Ash utilisation. O Pannerselvam, Deputy Chief Minister of Tamil Nadu welcomed the dignitaries and gathering.