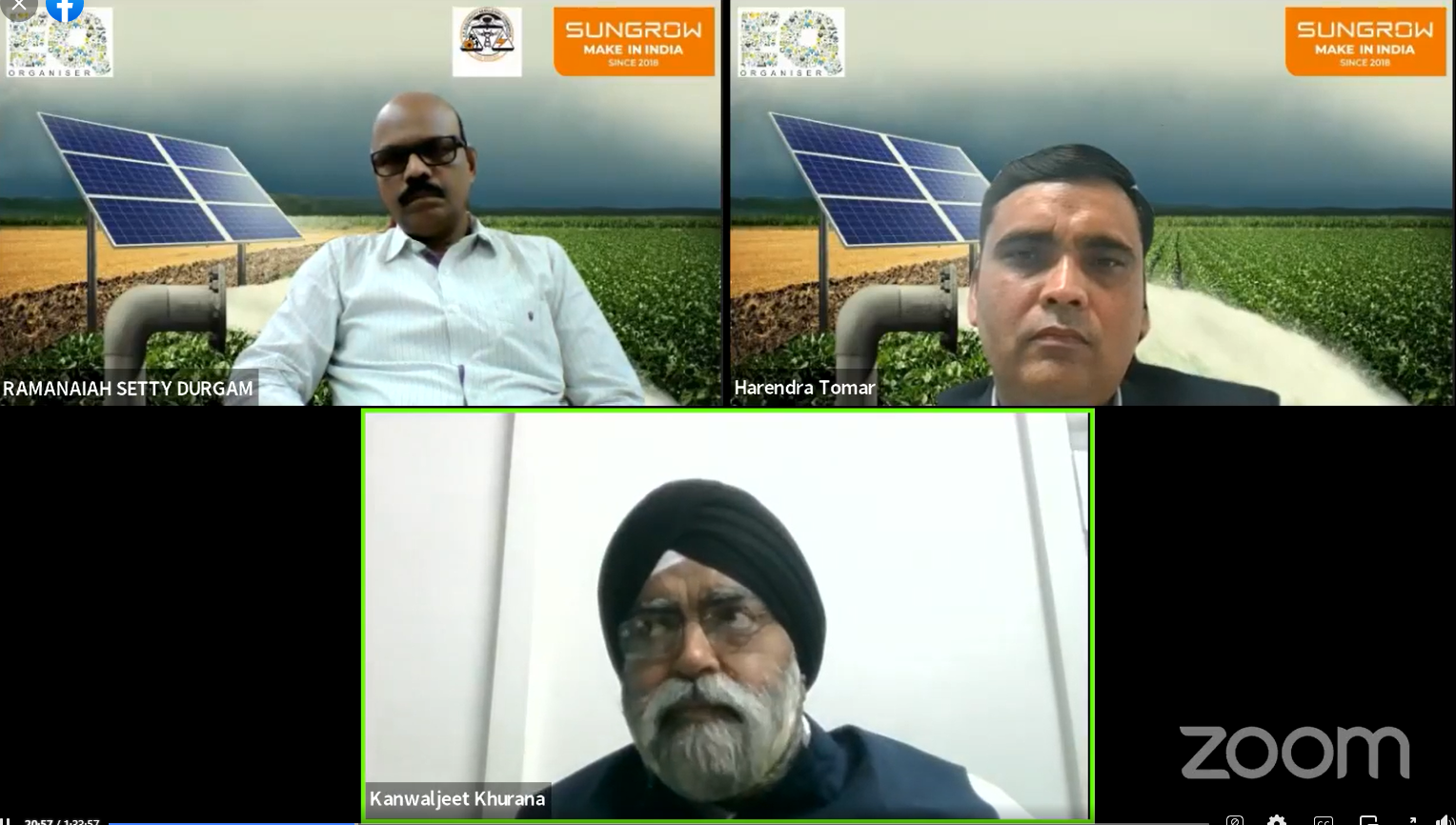 In a webinar conducted by EQ Magazine and sponsored by Sungrow, prospects of the PM-KUSUM scheme were discussed. Here is an insight to it…

The growing concerns regarding climate change have forced economies to frame public schemes around solar energy. These schemes are formed for public welfare whilst consciously acknowledging the climate change crisis. One such scheme is the PM-KUSUM (Kisan Urja Suraksha evam Utthaan Mahabhiyan).

In a webinar conducted by EQ International Magazine and sponsored by Sungrow, the panelist raised important issues surrounding this scheme. This scheme, aimed at providing electricity autonomy, was appreciated for its good intention and accurate approach. During the webinar, various aspects of PM-KUSUM were discussed.

PM-KUSUM is a farmer-centered scheme to decentralize solar power production up to 28,250 MW. It would provide an option for the farmers to have an additional income by selling surplus power to the grid. It could improve energy security and provide a boost to the rural economy through solar power projects set up on farmers’ barren lands.

With the aim to add 30.8 GW solar capacity by 2022, the PM-KUSUM consists of three components:

The webinar started with the presentation by Harendra Tomar, General Secretary at Sungrow (India) Pvt. Ltd. He presented Sungrow utility-scale system solution ‘SG250HX-IN-20’ built for hilly terrain. He introduced the solution as the world’s most powerful 1500V string inverter that is available for small-scale and large-scale projects, making it perfectly suitable for KUSUM Scheme, component A. He further stated that there are various installations as some of the states have already commissioned these inverters under this scheme.

“PM Kusum, especially component B is a win-win situation for both the farmer and the government. Because the government can now just do away with the CapEx of the lines giving them the power for free and for the farmers, they can get water round the year so that they can migrate from a single crop to three crops every year. This will double their income as our honourable Prime Minister has seen (envisioned) it,” said Kanwaljeet Khurana, Co-founder of Sadbhav Futuretech Pvt Ltd.

He added, “Plus we have about more than three crore diesel pumps in the country. Diesel, as we all know, is not our product. We are wasting our precious foreign exchange to import diesel and it is all creating pollution… So, PM Kusum Yojna will be a game changer, both in terms of the environment and the power.”

He added, “Based on the MNRE benchmark post, we arrived (the beneficiary) at 42 per cent of the total cost. The rest of the amount is a subsidy from the state government… For this year, we are going to install 100 numbers and next year onwards, we have a larger project around 6500 numbers for 2023. This is our target.”

“Regarding the component B programme, we do not have many inquiries. We got only 23 numbers. So, we couldn’t implement that project right now. We are waiting for more beneficiaries. In Kerala, unelectrified areas are very low, so, we could not identify the beneficiary store component B and component C also. We are giving free electricity for up to 5HP per consumer. So they are also hesitating to come to this program. Anyway, the subsidy amount is very high in Kerala state and we are giving more than 50% as a total subsidy. This is our program strategy,” concluded Jayakumar.

The final panelist Ramanaiah Setty Durgam, Deputy Director (Tariff Engineering), Andhra Pradesh Electricity Regulatory Commission (APERC) said, “The energy consumed by farmers is approximately 200 to 250 billion units out of the 1400 billion units per annum. In terms of numbers there are about 20 million concepts of reconnected and 10 million concepts of off-grid, followed by diesel or kerosene. So, as per these statistics provided in the KUSUM document, the objective behind the KUSUM scheme is to provide some income to the farmer and to promote decentralised renewable energy generation.” He added, “We have a capacity targeted transition of 100 GW in 2022-2023. Out of that, 40 GW is supposed to be promoted under decent lens mark. So, as a part of that, this scheme is announced.”

He further said, “It is a wonderful program… Under component A, the farmers are allowed to establish a group of user associations in different farms, below 500 KW to two MW connected to different substations at trader level for establishment of a small plant connected to discount substations at trader level. So, the target is about 10000 megawatts. The final central financial assistance provided in the scheme is about 15000 crore.”

Speaking on component B of the scheme, he said, “Component B is to distribute 20 lakhs pumps sets for months. So, component C is distributing 15 lakhs concepts to the grid connected farms… The total outlay of the scheme is 35000 crores.” He explained that despite being a wonderful programme, the progress is not moving at a pace it should. This needs to be incentivised.

These statements were followed by a panel discussion where these panelists exchanged their thoughts on the scheme and its perpetual impact on the stakeholders.

On being asked his views on the KUSUM scheme, Harendra Tomar said, “While the decentralisation of power may give some benefits to the DISCOMs, under this scheme there is incentives for the DISCOMs which will certainly help them (as) everyone knows that DISCOMs are huge loss making companies. So, I think that incentives under the scheme may not give much burden on DISCOMs. It is going to relieve some burden on the DISCOMs. Also, it may help reduce the transmission losses.”

Speaking on the role of nodal agencies, Sunil Bansal agreed that these agencies need to take a call to facilitate the farmers as they alone cannot go through the process of changing the tariff. He said, “There is a direct impact of 7% of the cost. Already, the tariff was very competitive and the success rate was also very low. Apart from everything the module prices increase due to market forces… It was mentioned that nodal agencies should do something about it but I do not think that the nodal agencies from any of the states are thinking about it.”

The webinar was concluded with an intellectual exchange of thoughts and suggestions to further enhance a wonderful scheme. It was moderated by Sunil Bansal, General Secretary at Rajasthan Solar Association. Surain Bajpayee, Project In-Charge, EMC – Madhya Pradesh Urja Vikas Nigam Limited too joined the webinar to share light on his respective state. The session ended after the question and answer round.