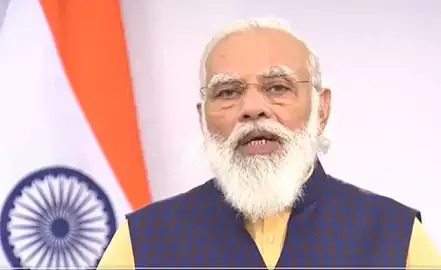 PM Modi Bats For ISA, Says It Will Contribute To Reducing Carbon Footprint

PM Modi Bats For ISA, Says It Will Contribute To Reducing Carbon Footprint

PM Modi bats for ISA, says it will contribute to reducing carbon footprint

New Delhi [India]: Prime Minister Narendra Modi on Sunday said that the International Solar Alliance would help in reducing carbon footprint and called it the fastest-growing international organisation with 88 signatories.

Speaking at the G20 summit virtually, Prime Minister Modi said, “We will meet our goal of 175 GW of renewable energy well before our target of 2022. We are taking a big step ahead by seeking to achieve 450 GW by 2030.”

“The International Solar Alliance (ISA) is among the fastest-growing international organisations with 88 signatures. We plan to mobilise billions of dollars, train thousands of stakeholders and promote research and development in renewable energy. The ISA will contribute to reducing carbon footprint,” he said further.

Citing the example of the Coalition for Disaster Resistance Infrastructure, Prime Minister Modi pointed out that 18 countries — of which nine countries are members of the G20 — and four have already joined the coalition.

“The CDRI has started work on increasing resilience of critical infrastructure. The damage during natural disasters is a subject that has not got enough attention it deserves. The poorer nations are impacted by this. Therefore, this coalition is extremely important,” he said.

Prime Minister Modi stressed that now is “the best time” for further increasing research in new and sustainable technologies and “should do so in the spirit of cooperation and collaboration.”

“The entire world can progress faster if there is greater support for technology and finance to the developing world. For humanity to prosper, every single individual must prosper rather than seeing labour as a factor of production alone, the focus must be on the human dignity of every worker,” he added.

The Summit also saw the participation of heads of state or government of 19 member countries, the European Union, other invited countries and international organisations like the UN, IMF, FATF, OECD.

0
0   0
previous Mukesh Ambani pitches for reforms in renewable energy
next Rs. 2 lakh crore to be invested for setting up 5000 Compressed bio-gas in the country, says Petroleum Minister at MoU signing event for setting up 900 CBG plants