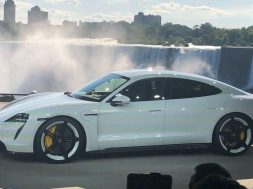 The Volkswagen AG unit will stick with green financing after selling a record 1 billion-euro green Schuldschein last year, according to Wolfgang Ratheiser, vice president for corporate finance and treasury

The Volkswagen AG unit will stick with green financing after selling a record 1 billion-euro green Schuldschein last year, according to Wolfgang Ratheiser, vice president for corporate finance and treasury. It has for now ruled out raising potentially more flexible financing in the faster-growing ESG-linked market.

“The 1-billion euro Schuldschein was only the beginning,” Ratheiser said in an interview. He didn’t elaborate on whether future green deals will be in the German Schuldschein debt market or alternatives such as loans and bonds.

Porsche turned to green financing ahead of the debut of the $100,000-plus Taycan, its first battery-powered car and a challenger to the Tesla Inc.’s Model S. The green structure enabled the company to tap funds with a dedicated sustainability focus, as well as providing an alternative path for investors that were over-exposed to the auto industry, Ratheiser said.

Porsche held talks with lenders about raising financing with pricing tied to environmental, social and governance, or ESG, targets. This is a growing trend in loan markets, partly because deals have no restrictions on use of proceeds. By contrast, green financing can only be used for defined projects with environmental benefits.

The carmaker has rejected the ESG option for now due to the lack of market maturity, Ratheiser said. The extra flexibility was also not needed because of the company’s specific green-investment program through 2022, he said.

“ESG is still in it’s early stages,” Ratheiser said. “Standardization is needed for clearer objectives and transparency.”
The possibility of Porsche seeking funding may also be a boost for Europe’s wider loan market, which has made the worst start to the year in at least a decade. That’s even before a new slowdown with the escalation of the coronavirus in Europe.

The timing for Porsche’s fund-raising plans will partly depend on market conditions, Ratheiser said. Still, the virus is yet to have any impact on the unit’s vehicle production.