NEW DELHI: Andhra Pradesh government has told in the high court it has realised that renewable power contracts with developers cannot be terminated and was embarrassed by its move towards this, but said power purchase agreements need to be renegotiated.

State advocate general S Sriram told the court that consultation and negotiation contemplated in a July 1 government order have not materialised and that the tariff revision will now be pursued by the state’s electricity commission, subject to high court’s decision, people present during the hearing on Thursday told ET.

The order had directed a high-level committee to renegotiate PPAs and submit report to the state in 45 days. Later, on July 12, Southern Andhra Power Distribution Company had sent letters to 139 power plants asking wind and solar energy plant to revise their tariff to Rs 2.43 per unit and Rs 2.44 per unit, respectively, with retrospective effect.

The Andhra Pradesh High Court had on July 25 stayed the state government’s July 1 order after a number of renewable energy companies filed suits against the move to renegotiate all power supply contracts.

Based on Thursday’s admission by the advocate general, power companies have now asked the high court to quash the July 1 order as well as the letters sent to renewable energy developers. The companies also demanded the court to direct adherence to all terms of the power purchase agreements, including payment to the companies.

The matter has been fixed for September 18 for rejoinder submissions by companies. 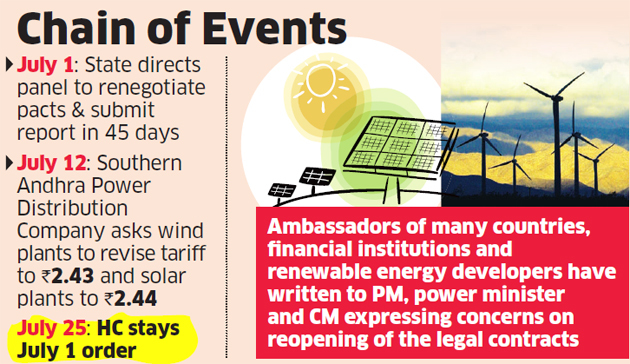 Ambassadors of countries including Japan, Canada and France, some financial institutions and renewable energy developers had taken up the matter with Prime Minister Narendra Modi, Union power minister R K Singh and chief minister Jaganmohan Reddy, writing to them raising concerns over the state’s move to reopen legal contracts.

Andhra Pradesh energy department spokesperson Chandra Sekhar Reddy had told ET on August 30 that electricity distribution companies in the state will go bust if the energy department continues to pay for wind and solar power at current tariffs.

The state is willing to negotiate the tariffs it quoted in the letters to renewable energy companies, he had said. The unpaid power generator dues of the discoms stand at about Rs 20,000 crore. In 2017-18, discoms resorted to borrowings to pay the dues and hence now they cannot raise more money through this route.