New Delhi: The dues to be paid by power distribution companies in India to generators stand at a monthly average of Rs 21,000 crore and large firms including GMR Energy and CLP India top the list of developers facing the highest level of financial stress as a result of these mammoth receivables, according to the latest analysis by CRISIL.

“Central and private generators supplying power to discoms under long-term PPAs have been unable to recover dues from discoms, leading to ballooning receivables and stress, and a stretched working-capital cycle. The problem is aggravated by the requirement of upfront payments to be made to Coal India and the railways for supply of coal for generation,” the ratings agency said in a report today.

The analysis is based on data on 18 generators — 6 central and 12 private — with a total conventional capacity of 115 GW tied up with state discoms across the country. State-owned NTPC, which has 54 GW of operational power-generation capacity, has the largest share in overdue from discoms. Among private gencos, Adani Power, which operates 10 GW of generation assets and supplies power to different states, has Rs 3,200 crore overdue.

Inordinate delays by discoms to clear dues has led to financial stress among some private generators, for whom receivables have been bloating over the past two years, the report said. The monthly average discom overdue as a share of the annual revenue of gencos stands at 212 per cent for GMR Energy, 87 per cent for CLP India and 75 per cent for JPVL. 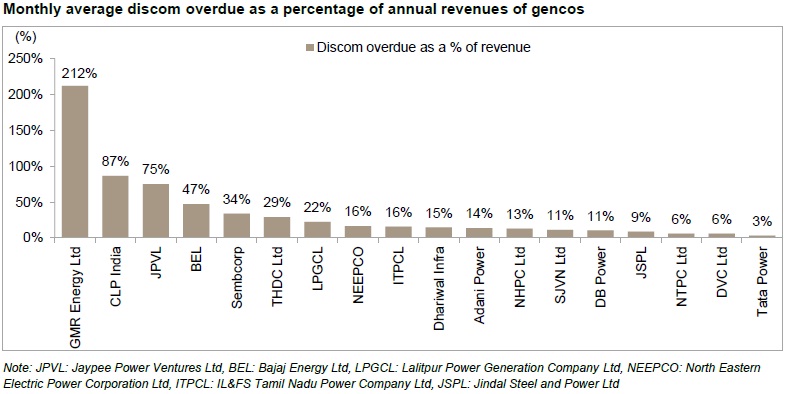 A parallel analysis of the discom-wise share in overall overdue reveals Uttar Pradesh tops the chart accounting for 22 per cent of the total dues to generating companies, followed by Tamil Nadu (15 per cent), Karnataka (15 per cent) and Telangana (9 per cent). 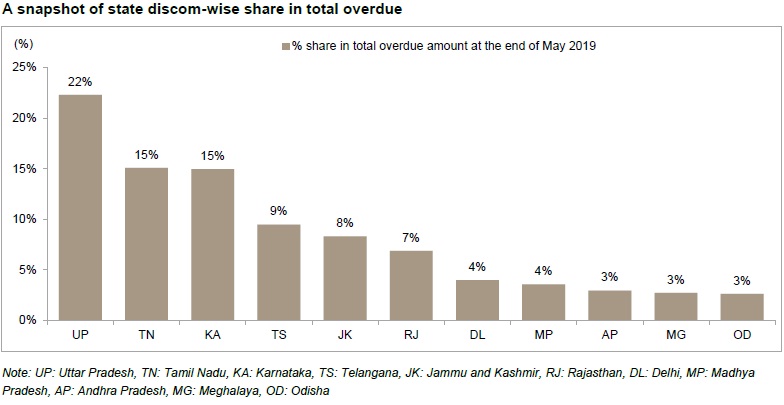 In order to address the issue of dues, the power ministry has directed all the discoms to open and maintain sufficient letters of credit (LC) as a payment-security mechanism under power purchase agreements (PPAs) signed with generation companies. The order, dated June 28, 2019, is to be implemented from August.

The implementation of the order will benefit generators, as the power supplied to discoms is conditional upon the opening of an LC for an amount adequate to cover the entire quantum of power to be supplied. Once an LC is opened, it will be communicated to the load despatch centre, enabling generators to recover any overdue amount by invoking the LC when a discom does not pay on time.

Delaying payments to generators has helped discoms manage their working-capital cycles, meet short-term obligations and avoid costly working-capital loans. This extra working-capital cushion, leveraged extensively by discoms, will not be available now, compelling discoms to raise additional funds either through internal accrual or state-government support in the form of grants or bank borrowings to finance operations.

Alternatively, discoms will be forced to undertake load-shedding when requisite generation is not available. That move, however, is going to be penalised as the government is likely to announce stringent norms to that effect.