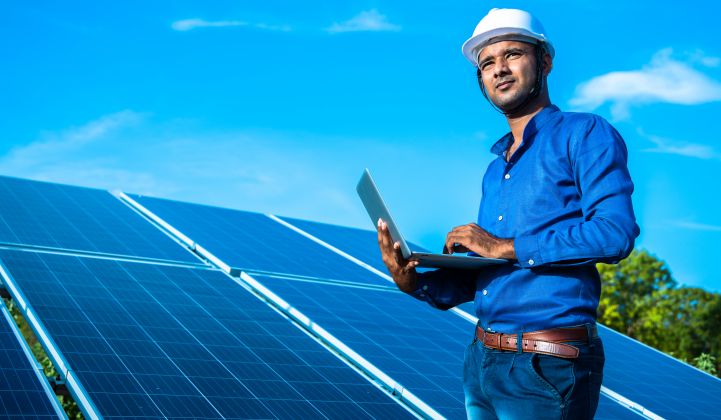 Wind and solar electricity are essential for ensuring a clean, sustainable energy supply in India.

Over the past decade, India has risen up the ranks to become the fourth-largest electricity market in the world, after the United States, the People’s Republic of China and the European Union.

Electricity demand has increased as the country successfully brought electricity connections to millions of its citizens and living standards rose. Due to population growth, urbanisation, industrialisation and air-conditioning units, India’s electricity demand will continue to increase rapidly.

To meet this demand in a sustainable manner, the country is aiming to realise a massive expansion of renewable energy. In the IEA Stated Policies Scenario, wind and solar PV together reach a share of more than 40% in total installed capacity by 2030, and make up around a quarter of total electricity generation. The enormous opportunities and challenges in this power sector transformation are explored in depth in the recently published IEA report, Renewables Integration in India.

The power sector transformation will require massive increases in operational flexibility. The share of solar and wind generation in India’s ten renewables-rich states is significantly higher than the national average of 7.5% (the highest annual share, in Karnataka, is 30%).

These states are already having to redefine how their power systems operate, and in the Stated Policies Scenario, the hour-to-hour variation in wind and solar output is set to triple over the next decade, along with wider fluctuation in daily peak demand as a result of the rapidly growing demand for air conditioners.

The increasingly variable net load would be met in the short to medium term by the existing, relatively inflexible coal power plants, expansion of grids, and storage – including pumped hydro and batteries. Beyond that, for coal plants to operate more flexibly while also meeting stricter emissions standards, further investment will be required for many existing state-operated plants. Such investments can be complemented by demand response, potentially the lowest‑cost flexibility solution in addition to the much-needed regulatory intervention to provide suitable compensation and remuneration for coal power plant retrofits.

The power system transformation in India will be enabled by the transformation of electricity demand from passive consumption to more proactive participation. Agricultural demand management, either through passively or actively shifting the timing of energy‑intensive processes such as water pumping, already plays an important role in balancing power supply and demand. The IEA foresees an even more active participation in demand management from the agricultural sector, buildings (including cooling) sectors and industry by 2030.

The existing agricultural demand-shifting practices already provide significant low-cost power system flexibility in India. This flexibility is enabled by the availability and use of existing distribution networks dedicated to irrigation load in rural areas. This ability to use the existing infrastructure to flexibly shift agricultural load has significant potential to provide low‑cost flexibility solutions as solar and wind penetration increases.

Today, agricultural demand response already plays an important role in balancing the power system of Karnataka and Gujarat. In Karnataka, agricultural pumping constitutes up to 33% of total electricity consumption and is actively being shifted to midday periods to balance high solar output.

In Gujarat, agricultural demand represents around 20% of total electricity consumption, and presently power is supplied to farmers during the night when demand from other sources is low, in order to provide a stable base load for coal generation.

The IEA Gujarat State model (with agricultural demand response based on analysis by Khanna, 2021) shows that by 2030, shifting agricultural demand to an appropriate time of the day could reduce renewable energy curtailment in Gujarat from 7% to below 3%. Not only is such demand management effective, but it is also central to cost-effective integration of increased solar generation by 2030.

It would also allow power to be supplied for agricultural use during the days – a key demand of farmers. Though with increased deployment of decentralised solar water pumps under the flagship PM-KUSUM scheme, utilities will need to transition away from agricultural demand management to agricultural demand response whereby farmers actively respond to appropriate price signals and are adequately compensated for the flexibility services that they provide.

While agricultural demand management/response is a cost-effective flexibility solution, shifting water supply from night to day might lead to higher water consumption or evaporation losses. Its use therefore must be balanced against the potential impact on the water stress of each region. India is in the “extremely high risk” category for water stress – meaning that more than 80% of the water available to agricultural, domestic, and industrial users is withdrawn annually – and half of the country faces the highest water stress levels in the world.

Agricultural consumption is a major source of demand in many emerging and developing countries. For example, the irrigation season in Bangladesh sees increases in peak electricity demand of almost a quarter, and groundwater pumping in Iran constitutes 11% of total electricity consumption (IRENA, 2016). This demand-side resource could provide policy makers and system planners across the developing world with an additional, cost-effective flexibility option to facilitate the integration of renewables.

India has set a target of 40 GW of rooftop solar by 2022, of which over 6.5 GW is already installed. The increase of rooftop solar comes with its own state-level challenges, such as the impact on DISCOM financial stability (due to revenue losses); distribution system issues (reactive power, voltage and reverse power flow); and demand forecast uncertainty.

However, it is important to note that installation of rooftop solar does not only come with challenges, but also benefits. Rooftop solar can lower system losses because electricity production is consumed close to the production site. DISCOMs can also avoid power purchase and defer investments; however, this all depends on how well rooftop solar generation fits with the consumption profile.

With increasing rooftop solar installation it is important to incentivise self-consumption as well as system friendly deployment in order to ensure effective system integration of rooftop solar.

One way of incentivising self-consumption, demand response, and general system friendly deployment of rooftop solar, is to look at the tariff structure. The rules for settling rooftop solar production in India is different from state to state, but some general principles can be applied.

For example, net metering with long settlement periods provides low incentives for adjusting demand patterns to rooftop solar PV. If designed without proper incentives, net metering effectively uses the grid as long‑term storage by the consumer, which can place burdens on the system. On the other hand, gross-metering does not use the grid as long‑term storage, although if the settlement of the production is too low it can slow down deployment.

In general, when designing tariff structures it is important to consider incentives as well as distributional aspects. If tariff structures allow consumers to avoid sharing the grid costs of the DISCOMs, then a situation may arise where these costs are shifted from wealthier consumers, who can afford to invest in rooftop solar, to lower income households, which do not have the option of investing in rooftop solar.

As power systems become more decentralised with the deployment of rooftop solar, electric vehicles and battery storage must implement effective price signals to provide the right incentives for system‑friendly investment.

Effective price signals can be achieved through prioritising the implementation of dynamic time‑of‑day (ToD) tariffs (for commercial and industrial consumers with advanced metering options) as well as eliminating cross-subsidies.

This could done similarly to the experience in California, where all rooftop solar customers (including residential) of regulated utilities have been required since 2016 to be on time‑of‑use (ToU)rates (ToU and ToD are used interchangeably as they refer to the same concept).

However, careful consideration and regular revisiting of peak hours and local peak requirements would be required, as was the case in California where peak times were shifted (from originally 11h00-18h00, but later expanded to 21h00) as rooftop solar additions and demand response continues to reshape state demand curves.

Over the long term, a more general use of ToU/ToD tariffs accessible to all users could incentivise a large share of customers to shift part of their consumption to times when renewable energy is available. ToU/ToD price signals sent through smart metering, associated with automated appliances and connected devices, could unlock massive flexibility resources and help the system become more efficient. The IEA’s 3DEN project is working on guidance to accelerate progress on effective utilisation of distributed flexibility through digitalisation.

The IEA Renewables Integration in India 2021 report outlines how India could maximise the amount and value of solar and wind in its power system by providing further options to improve power system flexibility in its renewables-rich states by 2030.

Beyond demand-side flexibility, the report also provides recommendations across a broad range of options, including power plant flexibility, pumped storage hydro and battery storage, grid flexibility, inter-state trading, and policy, market and regulatory recommendations for the short- to mid-term as well. As India is becoming an increasingly important player in the global energy scene, the world is looking to this large and diverse country for leadership and solutions that can guide other emerging economies.