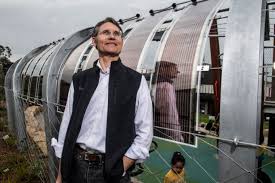 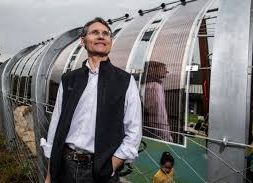 An Australian breakthrough in wafer-thin, lightweight solar panels that can be stuck on to any surface is set to deliver Australia a new source of local manufacturing, the researcher whose team developed it says.

Newcastle University physics professor Paul Dastoor said his team had completed a fully functional demonstration project and has several more in the works.

The technology is a couple of years away from full commercialisation and Professor Dastoor said he is now “gearing up to build the first factory to produce printed solar here in Australia”.

“We are in the process of securing funding to get us to the next scale of production,” he said.

Liquid organic polymers are laid onto sheets of material by everyday printers, like ink on paper, to create a solar panel just 0.075 millimetres thick that can be stuck, with special adhesive tape, to a range of surfaces. Traditional rooftop photovoltaic solar panels use silicon to conduct electricity.

The first demonstration project for printed solar is powering a light display in Lane Cove town centre on Sydney’s north shore, with panels stuck on the roof of a covered walkway powering the entire set-up.

Professor Dastoor said that, in the near future, printed solar technology could be developed to fit almost any surface to power urban lighting, roadsides water pumps, disaster shelters, caravans and camping equipment, and be installed on anything from smart blinds for residential buildings to floating covers for dams and pools, greenhouse covers, or even yacht sails.

“Imagine a world where everyone has access to electricity, and where every surface can generate clean, low cost, sustainable energy from the sun,” Professor Dastoor said.

But it’s not all smooth sailing for printed solar. While its production cost of $10 a square metre is very low, and the panels weigh next to nothing compared with rooftop solar, which tips the scales at about 15 kilograms a square metre, printed solar is far less efficient and durable than established technologies.

Printed solar panels last for only two years and deliver just 2 per cent of the efficiency of rooftop panels, which are built to last about 20 years.

Professor Dastoor said his team had calculated that, to be competitive, his printed solar technology needed to deliver a three-year lifespan and operate at 3 per cent the efficiency of existing technology, which he said would be achieved “within the next two years”.

Outside niche applications printed solar could find a household market through a retail contract that work by “leasing your roof space for cheaper power”, Professor Dastoor said.

“The business model could be that electricity retailers offer the technology on a contract basis similar to mobile phones – the retailer installs and replaces the panels as they wear out and you get discounted power,” Professor Dastoor said.

“The way it will work [is that] you would sign up for an electricity plan for printed solar on your roof, [and] get charged cheaper than [your] current bill.

“Photovoltaic panels can be tricky for household installations. They have a high upfront cost and installations last around 20 years.”

He said it would be an advantage to buy printed panels on a plan.

“Every time we make an improved version, you’ll get it on your roof, just as you get a new phone when you renew your contract.”