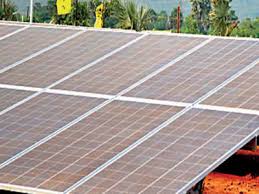 Project for solar power on farmland to kick off in Delhi 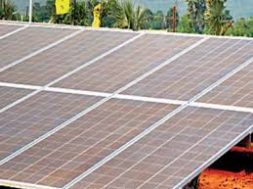 Project for solar power on farmland to kick off in Delhi

NEW DELHI: Delhi government’s plan to generate solar energy on agricultural land is set to take off next week.

The power department will soon float tenders to invite companies to set up the solar plants under the Mukhyamantri Kisan Aay Badhotari Solar Yojana under the public-private participation model.

A power department official said they have got the consent of farmers to install the solar panels on almost 150 acres of agricultural land in outer Delhi.

The scheme was approved by the government in July last year, but picked up speed only after Delhi Electricity Regulatory Commission (DERC) notified the net metering guidelines.

The energy generated through the renewable source will be exported to the grid and then supplied to the areas, the official said. The virtual net-metering will calculate the total energy exported and adjusted in more than one electric connection of participating consumers.

Under the scheme, the private companies under the RESCO (Renewable Energy Service Company) model will be allowed to install solar panels on not more than one-third of the total land owned by a farmer. The farmers will be paid Rs 1 lakh per acre as rent with 6% annual increase for 25 years. By the 25th year, the farmer will be getting Rs 4.04 lakh per acre from the companies.

Though no commercial activity will be allowed on the agricultural land, the official said the installation was exempted under Section 81 of the Land Act.

While the installation of solar panels will help the farmers increase their income by 3-4 times, the tips on hi-tech farming will help them augment it further.

The officials said the panels would be installed 3.5 metre above the surface to allow passage of tractors and unhindered farming activity. The farmers will also get 1,000 units of free electricity every year for each acre of land, he said. According to the official, a total of six acres would be required for the installation of 1MW solar plant, which could generate approximately 13 lakh units of electricity annually.

The scheme, said the official, involved at least three departments of Delhi government — revenue, power and development. While the revenue department has been tasked with the responsibility of identifying land-owning farmers and help them with necessary documentation and signing the contract with the agencies concerned, the development department would create awareness about the scheme among the farmers by organising workshops. The power department will look after the overall implementation of the scheme and tendering processes.