The new proposal would encourage greater use of renewable power through time-of-use price signals and other load management strategies.

This marks an expansion of SCE’s existing Charge Ready program, with a budget to build 1,250 charging stations at 60 different locations across the utility’s service territory. SCE recently intalled its 1,000th EV charging station and is on track to wrap up this phase of the program by the end of the year.

The Tuesday filing comes shortly after SCE won commission approval to spend $356 million in ratepayer funds on expanding EV charging infrastructure for trucks, buses and other industrial vehicles. If regulators green light the latest proposal at the requested funding level, SCE’s charging program spending would come to more than $1.1 billion.

Most of the charging stations added during Charge Ready’s pilot phase were installed in workplaces, schools, hospitals and other destination centers. In the proposed second phase, SCE wants to increase access to chargers in apartment and condominium complexes and deploy at least 30 percent of charging stations in communities that are disproportionately affected by pollution and economic hardship.

If the second phase is approved, SCE also plans to launch a marketing and customer education campaign to increase EV awareness.

In addition, “SCE’s Charge Ready 2 portfolio encourages customers to help California use abundant renewable power and improve use of the electric system through [time-of-use] price signals and other load management strategies,” according to utility testimony.

By shifting EV load to hours of the day when there is excess generation on the grid, driven by large- and small-scale solar project, the load is less costly to serve, which the utility said provides downward pressure on costs and eventually rates.

The lastest propsal largely follows the infrastructure model developed for the first phase of Charge Ready, “where SCE deploys, owns, and maintains the electric infrastructure needed to serve charging equipment for light-duty
vehicles (up to and including the make-ready stubs),” the filing states. However, up to 4,230 charging ports could be owned and operated by the utility at multi-dwelling units and government facilities.

Pacific Gas & Electric currently operates the largest utility-sponsored EV charging program in the country, with a budget of $130 million to build 7,500 Level 2 chargers. PG&E initially proposed a $654 million charging program in February 2015, but the CPUC rejected the plan. 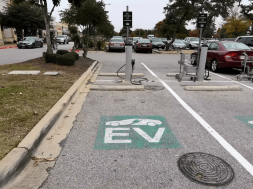