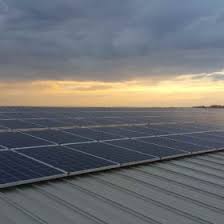 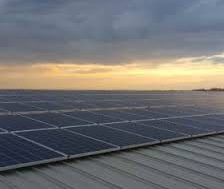 LAMU, Kenya : Miriam Bahero Musa sat on a yellow 20-litre jerrycan, a smaller white one in her hand, as she lined up with 20 other women to collect water at the Kiunga desalination plant on Kenya’s coast.

“Water is scarce in the area,” said Musa, adding that local people are pretty much used to shortages. “We only get a temporary reprieve during rainy seasons,” she added.

The plant in Lamu County, near the border with Somalia, about 470 km (292 miles) east of Nairobi, is fitted with solar panels. It pumps water from shallow wells drilled within a few metres of the ocean’s high-tide mark into settlement tanks.

The water is then pushed through purifiers that filter out sediment and any foreign bodies, removing odours and cloudiness.

From there, the cleaned water is pumped into membranes where a process of reverse osmosis separates the sweet and salt water.

During the process, for every 2 litres of fresh water channelled into holding tanks, 6 litres of salt water is redirected back into the ocean.

Chlorine, used for long-term storage and protection against bacteria, is added to the clean water through an automated pump. The treated water, now safe for human consumption, is then sold to Kiunga residents.

The plant operates on energy from its solar panels, which produce 50 kilowatts of power daily – enough to run two pumps that suck water from the wells on a 24-hour basis.

And even as some businesses were forced to shut under government-imposed restrictions to contain the spread of the novel coronavirus in recent months, the water plant has continued to operate 24/7 as an essential service provider.

Residents still queue up to get clean water for drinking and personal hygiene including hand-washing, a COVID-19 prevention measure recommended by the state.

“We will keep on washing our hands until this (disease) disappears. I am now forced to purchase two additional jerrycans of water (daily) to cater for hand-washing in my house, but it is still much cheaper than buying hand sanitisers,” said local resident Sharifa Fumo, who has increased her trips to the plant.

Mohamad Sharif, manager of the Kiunga Community Conservancy, a group set up to protect the area’s land and resources, said the plant was very popular.

“We have people now travelling long distances to just come and fetch clean water here – even Somali soldiers regularly cross the border … as anyone can make use of the facility,” he said.

Athman Aboud Athman, a water vendor in Kiunga, said he and colleagues used to sell 20-litre jerrycans for 50 Kenyan shillings ($0.47) each but had to walk a long way to get the clean water.

Now the vendors’ profits have increased since the sale price remains unchanged and they can make more trips to the plant in a short space of time, while their customer base has grown thanks to the high-quality water which is easy on soap and fabric.

The desalination plant was constructed by GivePower, a U.S.-based nonprofit that provides solar power systems to communities in developing nations, including schools.

Kyle Stephan, GivePower’s vice president of operations, said the water plant was constructed with funding of $565,000 following a request by Kiunga residents through the conservancy.

Kenya’s Chief Administrative Secretary for Water Andrew Tuimur said infrastructure projects like the Kiunga solar water farm – which the government was not involved in – were costly but necessary to plug the country’s water shortages.

Kenya produces an annual average of 450 litres of water per capita for its population of about 50 million, he noted.

“Anything less than 1,000 litres per person per year is considered water-scarce,” he explained.

According to U.N. figures, 41% of Kenyans still rely on unimproved water sources, such as ponds, shallow wells and rivers, while just 29% have access to safely managed sanitation, with rural areas and urban slums worst hit.

Only nine out of 55 public water service providers in Kenya provide a continuous supply, leaving people to find their own ways of meeting their water and sanitation needs.

Globalwaters.org, a U.S. government website, notes access to water has failed to keep up with Kenya’s growing population, while finance for infrastructure is limited and water unevenly distributed across the country, beset by droughts and floods.

Stephan said the Kiunga project was designed to produce clean water for 20 years, in the hope it can continue to operate beyond that or be replaced if running costs get too high.

To make the project economically sustainable, GivePower has hired locals to operate the water plant on a day-to-day basis with money from sales used to repair the facility when needed.

The U.S.-based organisation recently commissioned a similar plant in Haiti on the freshwater-scarce island of La Gonave, off the coast of the capital Port-au-Prince.

GivePower founder and CEO Hayes Barnard said in a statement that availability of clean drinking water would be critical in the impoverished Caribbean nation’s efforts to prevent and treat COVID-19, as well as other waterborne diseases it already faces.

GivePower plans to launch other such projects, partnering with governments and communities worldwide, including on new projects in Colombia.

It also plans to build another Kenyan desalination plant in Likoni, near Mombasa, by the end of this year.