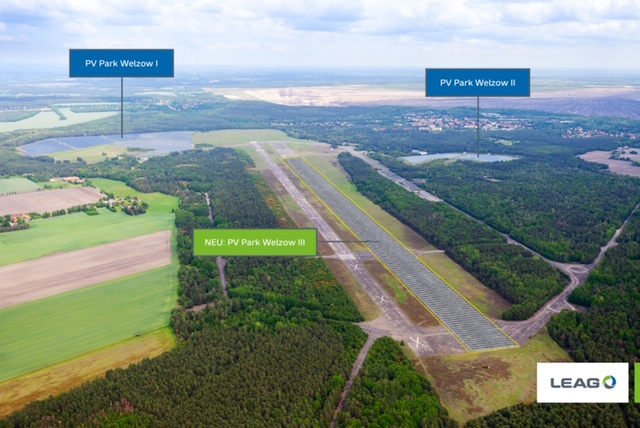 Solar power near lignite mine: juwi plans and builds 10-megawatt PV plant for LEAG in Brandenburg 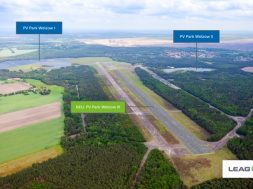 Solar power near lignite mine: juwi plans and builds 10-megawatt PV plant for LEAG in Brandenburg

The juwi group, one of the leading project developers and O&M service providers for renewable energies, is planning a utility-scale solar power plant south of Cottbus with Brandenburg energy company LEAG. Near the city of Welzow (district Oberspreewald-Lausitz) juwi is building a 10-megawatt photovoltaic system for Lausitz Energie Bergbau AG and Lausitz Energie Kraftwerke AG (LEAG) on an airfield close to the Welzow-Süd opencast mine. The two companies signed a contract yesterday. The start of construction is in about seven weeks, commissioning is scheduled for the end of October.

“The potential for generating electricity with renewable energies in the lignite areas of Germany is enormous,” says juwi-CEO Michael Class. “We are very pleased to be building LEAG’s nationwide first solar project.” Juwi had developed the project over the past few months and successfully launched it through one of the Federal Network Agency’s renewable energy tenders last year. “For the companies in the lignite mining regions, this offers the opportunity to continue to play a significant role in the energy supply as part of the energy transition,” says Class, pointing to the industrial-policy significance of switching to renewable energy, especially in the mining areas of eastern Germany.

“For us, as the fourth-largest energy producer in Germany, it is obvious that we are expanding our generation portfolio, focusing not only on our core business, lignite, but also on renewable energies. We tackle the challenge of expanding our business for the future with new business areas and synergies and are making use of the energy expertise that we have developed here in Lusatia over the years, “says Dr. Helmar Rendez, CEO of Lausitz Energie Bergbau AG and Lausitz Energie Kraftwerke AG (LEAG).

The plant will produce about 10 million kilowatt hours of clean electricity annually after completion. This corresponds to the annual electricity requirement of more than 3,000 households. More than 27,000 modules from manufacturer Astronergy and two central inverters from SMA are used. Juwi was not only responsible for the planning of the plant, but will also buy the components, set up the plant, and connect it to the power grid at the Bahnsdorf substation.

The technical management of the plant will be handled by juwi Operations & Maintenance GmbH: in the first phase over a period of five years, the solar park operated by LEAG will be maintained by juwi. LEAG itself is responsible for the marketing of the generated electricity. In 2012, juwi AG built two large photovoltaic systems with a total output of 18.6 megawatts in Welzow.

About the juwi group

The juwi group is one of the world’s leading companies in the area of renewable energy. The renewable energy pioneer with a strong regional presence offers project development, EPC, O&M Services as well as products and solutions for the energy turnaround. Company activities are mainly projects with solar and wind. The juwi group was established in 1996 in Rhineland-Palatinate/Germany. Since the end of 2014, Mannheim based utility MVV Energie AG has been partner and shareholder of the juwi Group. juwi has about 850 employees worldwide, branches on all continents and is actively engaged in various projects all over the globe. Working together with passion to implement renewable energy economically and reliably is what drives us.

So far, juwi has realized more than 1,000 wind turbines with a total capacity of more than. 2,300 megawatts at more than 175 sites globally. In the solar segment, more than 1,700 projects with a total capacity of around 2,500 megawatts have been designed and constructed. Combined, these energy systems produce around 8.0 billion kilowatt hours of clean energy per year, equaling the annual demand of more than 2.6 million German households. Within the past 20 years, juwi has initiated an investment volume of around 8.8 billion euros to realize these projects.