Sri Lanka is making a big push into the energy sector, with focus on renewable energy, and that is an opportunity for India. This was the message that came across clearly to a team of Indian journalists that visited Sri Lanka this week.

Of the 4,000-odd MW of installed capacity, wind and solar is today only 550 MW, but the share of renewable energy in the mix is set to rise.

A 100 MW wind project in Mannar in the North West (where the potential is estimated to be 5,000 MW), a programme to spawn distributed installation of 60 solar plants of 1 MW capacity each across the country, another clutch of 100 MW of solar plants including one floating plant on a reservoir and a million roof top solar plants aggregating to 1 GW are in various stages of roll-out, said Dr B M S Batagoda, Secretary, Ministry of Power & Renewable Energy.

The wind project in Mannar will be owned by the state-owned utility, Ceylon Electricity Board, but a global tender will be out shortly for building the plant. The 100 MW is part of a 375 MW, ADB-funded programme, which includes a renewable energy dispatch centre for forecast and manage the generation.

There is already considerable Indian presence in Sri Lankan renewable energy sector. Operating in Sri Lanka through its Indian subsidiary, the Spanish wind turbine manufacturer has set up 76 MW of wind power capacity for customers in the island. Also, Gamesa has just completed construction of a 20 MW solar plant near Hambantota—the country’s first utility-scale solar power plant. Wind turbine manufacturers Suzlon and ReGen Powertech have also sold their machines there.

The island is suitable for both wind and solar, said a spokesman of Gamesa. At the windfarms in Kalpatiya and Puttalam on the western coast, wind speeds are of the order of a very fecund 8 metres a second; likewise the good insolation at Hambantota on the southern rim is estimated to yield at least 2.2 million kWhr of electricity a MW of solar capacity.

Alongside wind and solar, Sri Lanka is pushing for power projects with LNG as feedstock. 900 MW of capacity is being tendered out in phases, apart from two plants of 500 MW each, one of which India’s NTPC is likely to build. NTPC had earlier wanted to build a 500 MW coal based plant at Sampur, but the project was scrapped last year on environmental grounds after ten years of negotiations. The other 500 MW will be put up by a Japanese company.

A hitch that needs to be ironed out is about who would put up the LNG terminal with re-gasification facilities. Both India and Japan want to do it-so, the project might turn out to be a two-way, or even a three-way joint venture, with Sri Lanka also involved, Batagoda said.

Crucial to India’s involvement in Sri Lankan energy projects is the construction of a transmission line – an undersea power cable – between the two countries, for which talks have been going on for some years now.

An earlier route has been redone to make it shorter by 50 km, said Batagoda, and India’s Power Grid Corporation could be involved in the construction of it.

A transmission line could make two-way flow of energy possible. Energy costs in Sri Lanka is quite high – average tariff hovers over 15 Sri Lankan rupees (or Rs 6.45), with the tariffs going as high as 45 LKR. Of the 5.5 million customers, 2.8 million consume less than 90 kWhr a month and fall into the lower slab of rates, says Sulakshana Jayawardenna, Director (Development), Ministry of Power and Renewable Energy. Ceylon Electricity Board pays around LKR 22 for wind and solar power, (though, a recent wind capacity auction hammered down the tariff to LKR 12.29 a kWhr.)

As such, there is potential for Sri Lanka to buy cheaper power from India, for which talks are on. Conversely, India could benefit if the wind-rich Mannar region could be developed to its full potential, Batagoda said. 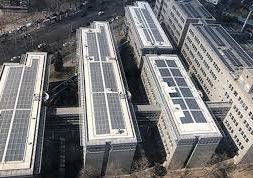