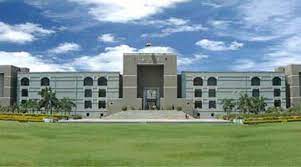 IN THE HIGH COURT OF GUJARAT AT AHMEDABAD

2. The petitioner happens to be the grandfather who, by filing this habeas corpus petition, seeks production of five years old grand child named Pranav, alleging that said child is in the wrongful custody of respondents – the relations on the maternal side of the corpus. It is further prayed to pass appropriate orders after ascertaining the wish of the corpus.

3. The painful story is that the parents of the R/SCR.A/6708/2021 ORDER DATED: 13/09/2021 corpus died having suffered from Corona during the currency of pandemic. The corpus remained at the house of the respondents. Respondent No.4 happens to be the maternal aunt.

3.1 It is relevant to note that on 04th August, 2021 the Court made following observations in its order.

“We have heard and interacted with the grandfather
– Petitioner Swaminath Kunchu Acharya aged about 71 years who is said to have worked in Railway Claims Tribunal in Gujarat as Court Master and also grandmother and elder brother of the deceased father, namely, Mr.Kamlesh. The said meeting took place through Video Conferencing for about 15-20 minutes. The child at this age is absolutely innocent and is unable to comprehend the nature of dispute in the present case and perhaps is unaware of the death of both of his parents. We have noticed his positive smiles and the behaviour towards the grandparents and the elder brother of his father and he expressed his willingness to come to the grandparents family in Ahmedabad. The maternal grandfather has also in all fairness expressed that the grandparents can even come to Dahod where they are living and even they can stay with them for 2-3 days. He also submitted that child Pranav has been admitted in a school in Dahod and will be looked after properly.”
3.2 The Court further stated, “Having interacted with the parties and after hearing the learned counsel for some time, we are of the opinion that both the families are in bereavement period having lost their son and daughter respectively, as aforesaid and, therefore, they should forget their acrimonies, and disputes, if any, for the time being and should work jointly in the best interest of the child who may not be even fully aware of the result and impact on his life on account of death of both of his parents at this tender age. It is for both the sides to keep aside their custody disputes in such circumstances and act in a congenial and friendly manner so as to allow the child who has lost both of his parents at this tender age of 5 or 6 years so that his mental and physical growth is not tainted by such disputes R/SCR.A/6708/2021 ORDER DATED: 13/09/2021 in the Courts of law. We counselled both the sides for this purpose and we are happy to place on record our appreciation for the positive responses of both side parties and their learned Advocates.”

3.3 Following final directions were given, “We are aware that even though that such a dispute may or may not lie with the four corners of a Habeas Corpus Petition but in the facts and circumstances of the case and in the best interest of the child Pranav Acharya aged 5 years, we give the following directions while keeping this Petition pending for further consideration.

(i) The paternal grandparents along with their son Kamlesh, who runs his restaurant in Coimbatore, Tamil Nadu but has come to Ahmedabad to be with his parents ( paternal grandparents of Pranav) may visit Dahod, the residence of the grand maternal uncle Madanmohan Shuryavanshiji and since he has extended the invitation to this parental family to come there to Dahod and even stay with them, the grandparents with Mr.Kamlesh can visit that family and if possible and convenient can stay there with them for 2-3 days and come back to Ahmedabad with Pranav aged 5 years. The grand maternal father and other relatives of maternal side whose daughter Rakhi Acharya died on 12.6.2021 are directed not to cause any hindrance in the same and keeping the best interest of the child in the mind will act in a friendly and congenial manner with the paternal grandparents and will willingly handover the custody of the child Pranav to the grandparents when they visit Dahod. Mr. Kamlesh Acharya has expressed his desire to take his parents even tomorrow and therefore possibly they may reach on 5 th or 6th of August, 2021 and after their comfortable and friendly stay at the place of Respondent – Madanmohan Shuryavanshi, they may come back with the child Pranav back to Ahmedabad and for a period of 15 days, the child Pranav may remain in the custody of paternal grandparents at Ahmedabad.”

3.4 We further notice that the Court observed thus, “We have observed the happiness and smiles R/SCR.A/6708/2021 ORDER DATED: 13/09/2021 on the face of the child when he was interacting with the paternal grandparents and Mr. Kamlesh, therefore, we feel his custody with the paternal grandparents will be safe and in the interest of the child Pranav, at least for the time being.”

4. Today, the child was before the Court. We called the child in our chamber. He came with his maternal aunt-respondent No.3 herein since he had been in custody of respondent No.3 till date. We interacted with the child. We thereafter called the petitioner-the grandfather, the grandmother and the uncle of the corpus being the younger son of the petitioner. We made the child to play and interact in presence of all the above family members. We tried to notice the behavour of the child.

5. Prima facie, we gathered impression that the child was not uncomfortable in the company of respondent No.3 and he was natural and normal while interacting with the grand parents.

6. At the same time, it is noticed that the direction given by the Court in earlier order dated 26th August, 2021for handing over the custody of the child to the grand parents on paternal side for a period of fifteen days.. Undisputedly, this direction has not been complied with. The child has remained with respondent No.3.

7. In the totality of circumstances and in view of what is recorded by us above and further in view of the above directions in order dated 26th August, 2021, we hereby direct that the corpus-Pranav aged R/SCR.A/6708/2021 ORDER DATED: 13/09/2021 five years may stay with the grand parents on the paternal side-the petitioner herein at Ahmedabad till the next date of posting of the petition. Respondent No.3 shall allow the custody of the child to the petitioner accordingly. Respective learned advocates shall ensure that the process is smoothly completed. The members of the family of the petitioner shall take good care of the corpus in terms of his physical and emotional needs.

8. In order to address the issue further, we direct the petitioner and the respondents to file their affidavits placing on record the details of the family members in the house and their relations, since the Court is concerned about the rightful and welfare oriented stay of the corpus.

9. At this stage, learned advocate for respondent Nos.3 and 4 stated that he has already prepared affidavit pursuant to last order of the Court. He is permitted to file such affidavit with the Registry.

TO facilitate the Court for considering the issue further, stand over to 30th September, 2021.