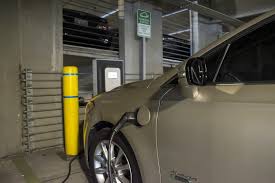 The proposal is pending approval from the Public Service Commission.

Tampa Electric Co. asked state regulators Friday for approval of a four-year pilot program that would lead to installing about 200 charging ports for electric vehicles.

The pilot would involve charging stations at a variety of types of locations such as workplaces, retail businesses and government buildings.

The utility would seek to recover an estimated $2 million in costs through customers’ base rates, according to the proposal filed Friday at the state Public Service Commission.

Tampa Electric pointed to increased use of electric vehicles, with the majority now being charged at owners’ homes. It said as longer-range electric vehicles become more common, there will be an increased need for higher-voltage chargers at workplaces or public charging sites.

“Lack of public charging infrastructure, whether perceived or real, is recognized as one of the greatest barriers to PEV (plug-in electric vehicle) adoption,” Friday’s filing said.

“In the near-term, Tampa Electric customers who are considering purchasing or who currently own an PEV will benefit from increased accessibility to public charging infrastructure. In the long-term, all customers are expected to benefit from Tampa Electric’s first-hand knowledge of local PEV charging behavior and grid-related impacts. Data collection from the pilot will help Tampa Electric evaluate PEV-specific programs or measures that support and encourage PEV adoption.”

The proposal comes after Florida Power & Light in June sought approval of a pilot program related to charging stations. That proposal remains pending at the Public Service Commission.