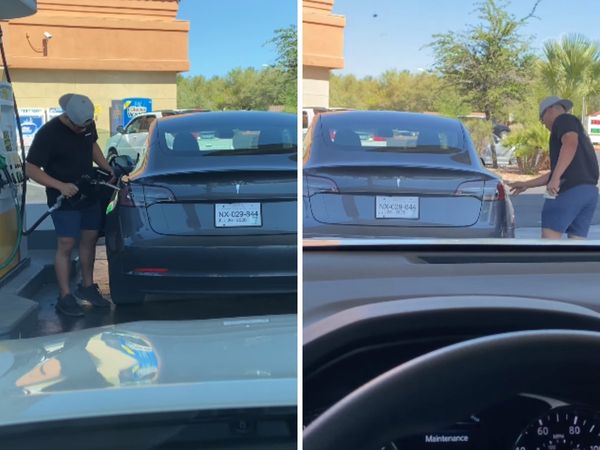 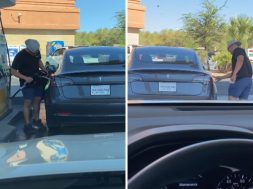 In a video that went viral on the internet, a Tesla driver is seen trying to fill up his Model 3 with petrol. He realized his mistake after searching the car’s boot and frunk for the fuel port.

In a recent video making rounds on the internet, a Tesla driver is seen trying to fill up his electric vehicle with petrol at a fuel station in the US. The video was captured by magician Justin Flom, and was later shared on his official Facebook page. This video was uploaded a few days ago and viralled on the interweb, garnering over 50,000 views. The video shows a Tesla Model 3 pulling up at a fuel station. Justin, who was right behind the Tesla in his car, was curious seeing the electric vehicle at the fuel station. But he soon realised that the driver had confused the e-car with a petrol-powered vehicle and was attempting to fill it up with petrol. This is when Justin started recording the incident on his phone.

The video, which is over three minutes long, shows the Tesla Model 3 driver getting out of the vehicle and entering his credit/debit card details in the fuel machine. He then opens the fuel tank lid, grabs the hose, and tries to fill petrol in his car, only to realise that the fuel inlet (in this case the charging inlet) looked different than a conventional fuel tank inlet. Confused, he tried looking at the other side on the car to locate the inlet for filling petrol. The driver, after searching all around the car, opens the boot to check for a conventional fuel port. Disappointed to find nothing in the trunk, he even opens the pops up the bonnet to search for a fuel port inside Model 3’s trunk.

By now, the Tesla driver looks visibly frustrated, and he pulls out his phone. He types something on the device, possibly searching on the internet how to fuel a Tesla Model 3 electric car. And the answer he received clearly left him surprised; the driver realised that he was driving an electric car which is not propelled by conventional fuel but electricity. He gets in the vehicle and drives out of the fuel station with no knowledge that this incident would soon surface on the cyberspace.

This viral video takes us back to 2018 when a similar incident occurred with a Tesla Model S driver, again in the US. A woman tried to fill the electric car with petrol and kept searching for the right inlet port, only to be informed by a Samaritan that what she was driving was an EV that consumed electricity.