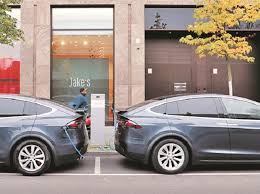 The cheaper car will come from cutting the cost of batteries in half, the chief executive officer said at an event Tuesday

Tesla laid out a road map to build a $25,000 car by 2023 and eventually 20 million cars a year, part of a highly anticipated presentation that was short on the sizzle from Elon Musk that investors have come to expect.

The cheaper car will come from cutting the cost of batteries in half, the chief executive officer said at an event Tuesday, based on a series of innovations that include using dry electrode technology and making the battery a structural element of the car.

Those incremental and longer-term advances belied expectations for a blockbuster leap forward, which Musk himself played up in the weeks ahead of his company’s first-ever “Battery Day” event, then walked back on Monday. Tesla shares fell as much as 7.7% in postmarket trading Tuesday after closing at $424.23.

“The challenge with the stock is that everything they are talking about is three years away,” said Gene Munster, managing director of Loup Ventures. “I think traditional auto is in an even tighter spot, but Tesla investors want this tomorrow.”

Vertical-integration improvements — from making its own battery cells on a pilot line at its factory in Fremont, California, to owning rights to a lithium clay deposit in Nevada — are designed to allow Tesla to cut costs and offer a cheap car as soon as 2023.

“This has always been our dream from the very beginning,” Musk said at the event showcasing Tesla’s battery technology. “In about three years from now, we are confident we can make a compelling $25,000 electric vehicle that is also fully autonomous.”