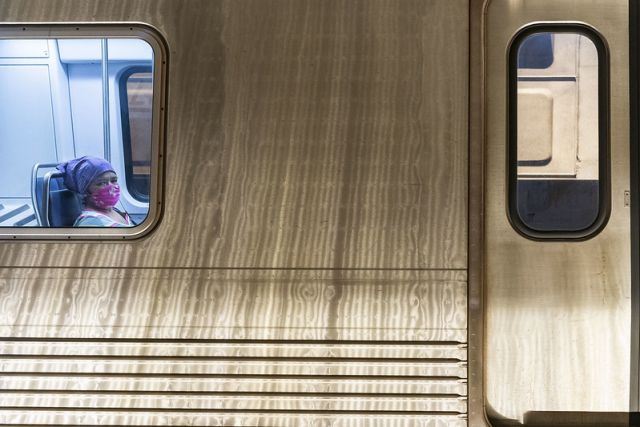 The coronavirus killed almost 2 million people and counting, while roughly 100 million people fell into extreme poverty. The world entered its worst recession since the second world war. Deep-rooted racial and economic injustices were exposed, while the  impacts of the pandemic itself fell disproportionately on communities of color. And these crises played out against the ever-present threat of climate change, including record-breaking fires, locust invasions, storms and other extreme weather events.

How the world resets after this unprecedented upheaval will define the year ahead and shape the course of history for years — even decades — to come. As Indian author and activist Arundhati Roy said of the pandemic, “it is a portal, a gateway between one world and the next.”

The question for 2021 is: What kind of world are we entering?

WRI President and CEO Andrew Steer addressed this question at Stories to Watch, WRI’s flagship event where he outlined the moments, trends and people that will affect the environment and international development in the year ahead. The stakes feel higher than ever before in 2021.

“By the end of this year, we will know what kind of civilization we really are,” Steer said.

After the Coronavirus Pandemic: How Will the World Reset?

Indeed, world’s “Great Reset” after COVID-19 is the backdrop against which all other moments will occur this year. Signals in 2021 will show whether we’re heading toward a cleaner, fairer, stronger world, or moving in the opposite direction.

Here are six indicators to watch throughout 2021 to better understand our direction of travel as the world begins to recover from COVID-19 and the economic fallout:

Countries already allocated $13 trillion to reboot economies, and are likely to spend trillions more in the coming year. Will these funds support clean, low-carbon projects, or dirty, fossil fuel-based infrastructure? Will they promote greater equity or continue to exacerbate the social divide?

Research shows that a green stimulus makes economic sense. Investing in building efficiency, for example, creates almost 3-4 times as many jobs per $1 million spent as investment in coal and gas. And yet since COVID-19 began, G20 countries have committed $240 billion to fossil fuels and only $184 billion to clean energy. 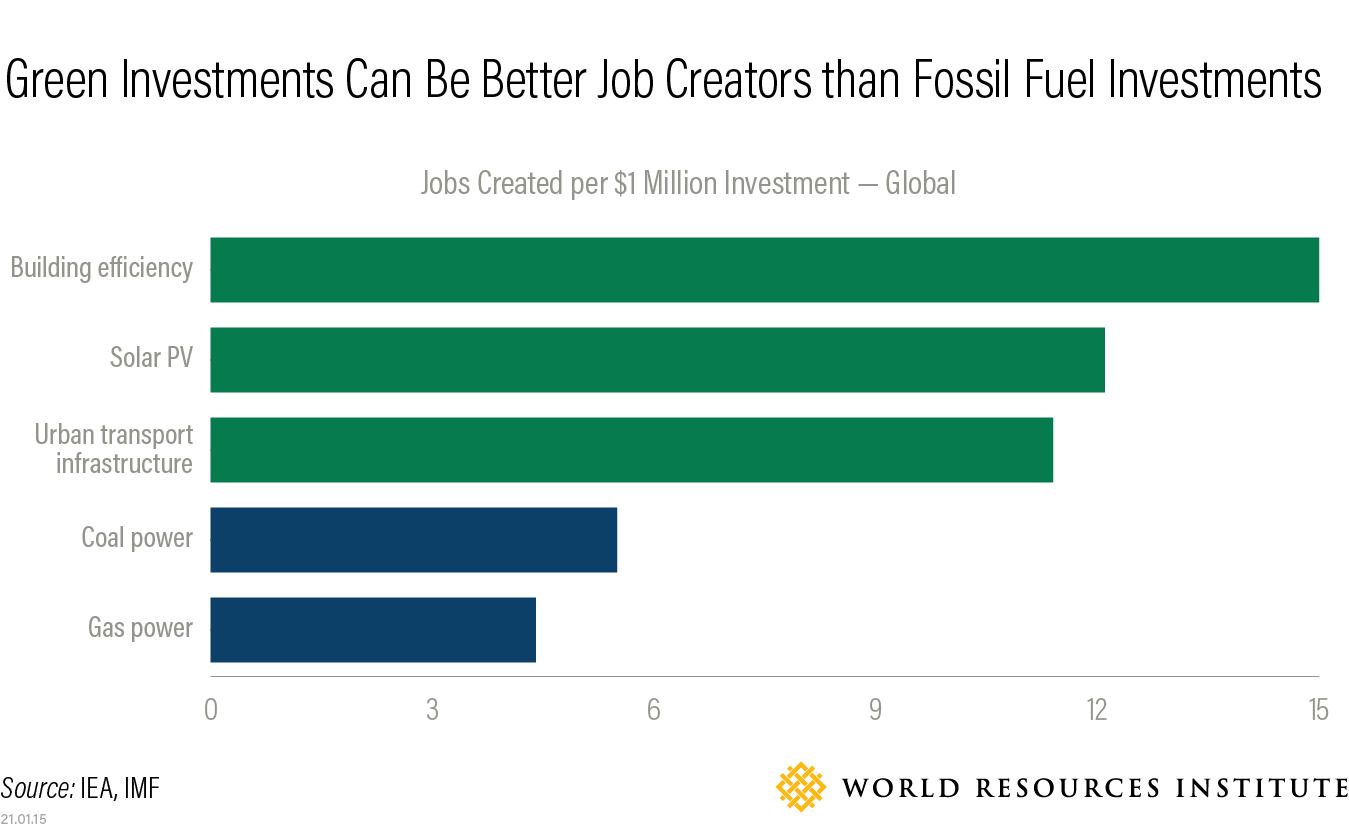 The EU emerged as a global leader with its landmark green deal, investing in climate-friendly initiatives and a just transition. Incoming U.S. President Biden vowed to similarly support green, fair growth when he takes office.

Watch whether other countries, both large economies and developing ones, as well as other international development institutions follow this approach to ensure the world is more resilient after COVID-19.

The question is: Will they deliver on these promises and what tools will they use?

“The United States has a lot of catching up to do quite frankly, and simply saying the right things won’t get us there,” Steer said. “And that’s why the first 100 days are so very important.”

Longer term, the United States will need to step up its national climate plan. WRI recommends cutting greenhouse gases 45-50% below 2005 levels by 2030, as well as strengthening adaptation measures. Fostering climate diplomacy internationally — such as by forging a climate deal with India, cooperating with China, and restoring ties with Canada and Mexico — are also important for securing global climate leadership.

The administration also stated a clear commitment to climate and racial justice issues. Following through on this pledge will be critical to ensure the administration succeeds in fostering equity and inclusion.

China’s Priorities in the Year Ahead

China is the only G20 country to boast economic growth in 2020 and is projected to increase its GDP by 8.2% in 2021. The country brought 100 million people out of poverty from 2012-2020. And in late 2020, China announced important new climate targets, including a goal to achieve net-zero emissions by 2060.

Yet on the other side of the equation, China is still the world’s top emitter of greenhouse gases and its largest investor in coal. China will need to take action in the near term to get on zero-carbon path. Several moments this year offer opportunities to do so:

Will 2021 be a Breakthrough Year for Nature?

Yet we’re heading in the wrong direction. Tropical forest loss increased by 41% annually since 2014.

This year offers many moments for progress, from the UN Food Systems Summit in September 2021 to the G20 meeting in October 2021 to the COP26 climate summit in Glasgow in November 2021 and more. Outcomes aligned with a four-pronged strategy to realize nature’s value are essential:

Public Transit in the Wake of COVID-19

Public transit ridership plummeted during the coronavirus pandemic. Many transportation systems are now on the verge of collapse.

The EU faces a $50 billion shortfall in public transit funding due to decreased ridership in 2020, while India lost $7 billion in bus revenue. 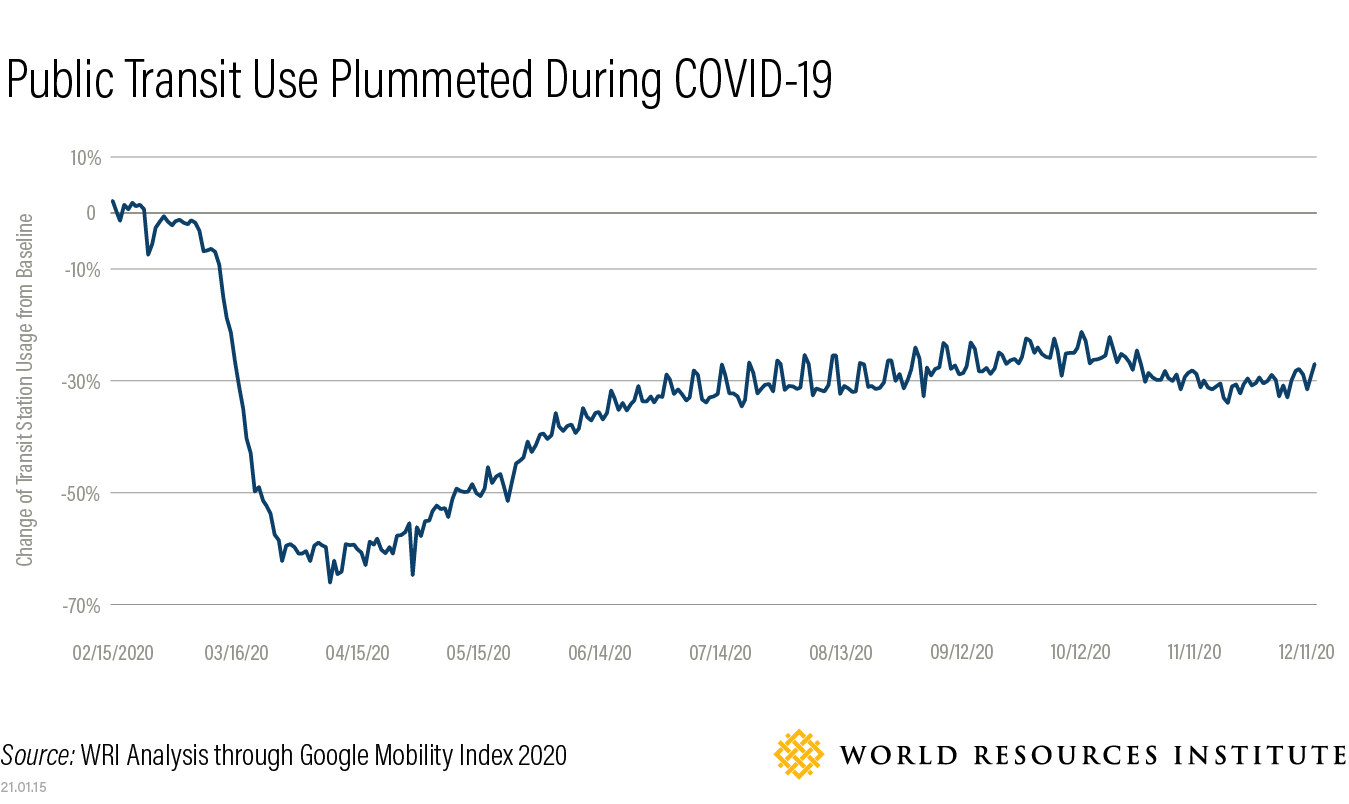 At the same time, expanding public transit systems is essential for fighting climate change and improving equity. For example, in the United States, Black households are 3 times more likely to lack access to a vehicle than white households. Models show that public transport cuts in sub-Saharan Africa in 2020 were part of the reason an additional 9% of the population into extreme poverty.

As cities emerge from the COVID-19 crisis, will they prioritize public transit over cars?

International Climate Action and the Road to Glasgow

The problem is that all this action isn’t yet adding up to enough progress. Recent WRI research shows the world will need to adopt renewable energy 6 times faster, phase out coal 5 times faster and electrify vehicles 22 times faster by 2030 — among other actions — to prevent the worst effects of climate change.

This year could be an inflection point for global climate action, provided the world seizes opportunities across four key areas: