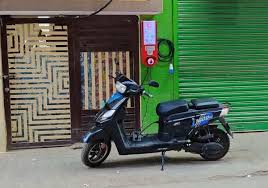 The Indian government has a bold vision of achieving all-electric vehicles on the roads by 2030. While experts still question the possibility of achieving the target,
electric vehicle adoption is slowly growing in India with major auto brands like Tata, Kia, MG Motors launching their EVs.

“Our aim is to have one charging station on every street of every city,” said Sameer Ranjan Jaiswal, co-founder of the startup. Jaiswal, along with Dheeraj Reddy and Yugraj Shukla, already runs an EV-fleet management startup and has also worked with the government on EV policy consultations.

Throughout their EV journey, the need for charging infrastructure was always a glaring problem. But one incident that really pushed them towards it was when Jaiswal’s best friend got stranded on the roads in Bengaluru for over four hours after his electric bike ran out of charge. “He almost swore off EVs then. But our idea was to ensure no one has to go through such an ordeal again,” he said.

Having launched in February this year, the startup already has over 2000 orders, out of which 520 are from kirana stores. “Due to COVID-19, our manufacturing got delayed, but now we have begun installations in Bengaluru and Trivandrum,” he said

While they don’t have manufacturing capabilities in-house, they built the design and have outsourced the manufacturing. While the charger is compatible with cars, scooters, and three-wheelers, their focus is currently on two and threewheelers. “We made the design ourselves keeping India’s infrastructure in mind.

Currently, we don’t have a charging station that is designed for India, and we also realised that we have to keep the cost low so that store owners can afford it,” he
said.

The charging hardware costs ₹10,000, and after that, all payments are processed through the Charzer app, where they have an 80-20 revenue share model. “The app is a one-stop-shop for all EV charging needs. All the charging stations will be listed on the app, and any EV owner can just go through the list to find the nearest charging station,” said Jaiswal.