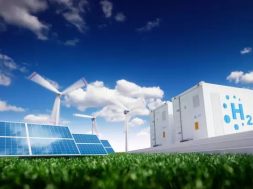 While several pilot projects have been launched in the field, the planned cooperation between the two sector leaders is aimed at using green hydrogen, created by using power from renewable sources, for the commercial production of steel

RWE, which is heavily reliant on coal, is able to enter the hydrogen business thanks to changes to Germany’s laws at a time when Berlin politicians are finalising a strategy to shift Europe’s largest economy toward low carbon energy sources.

Steelmaking, one of the most polluting industrial activities which accounts for 7-9 per cent of global emissions, has long been considered an ideal use case for hydrogen, which is created by splitting water into its two components via the use of electricity.

While several pilot projects have been launched in the field, the planned cooperation between the two sector leaders is aimed at using green hydrogen, created by using power from renewable sources, for the commercial production of steel.

A 100 megawatt hydrogen plant RWE plans to build in the state of Lower Saxony could supply hydrogen to Thyssenkrupp’s steel operations in Duisburg by the middle of the decade, the two groups said, responding to a Reuters request for comment.

The plant could deliver 1.7 tonnes of hydrogen gas per hour, or about 70 per cent needed by a blast furnace Thyssenkrupp plans to install with the specific purpose of running it on the fuel instead of highly polluting coal, the companies said.

This would be enough to produce 50,000 tonnes of climate neutral steel per year, roughly the amount needed to make as many cars, they added.

While this is still a far cry from the 11 million tonnes of steel the group produces each year the partnership comes amid an industry-wide shift that has seen rivals, including heavyweight ArcelorMittal , starting to explore the technology.

“Climate neutrality in the steel sector is possible and we’re accelerating the switch with regard to our production,” Bernhard Osburg, chief executive of Thyssenkrupp Steel Europe, said.

“Nowhere can hydrogen be used with a similar impact on climate protection than in steel.”

The planned partnership is bringing both Thyssenkrupp and RWE, Europe’s largest emitter, closer to their goal of becoming fully climate neutral by 2050 and 2040, respectively.

It also follows Germany’s move to commit 9 billion euros ($10.2 billion) of investments to expand hydrogen capacity at home and abroad as part of a national strategy to make the country a key supplier of the technology worldwide.

The companies said the partnership was dependent on the development of a hydrogen transport network, which is currently being pursued by a consortium consisting of BP , Evonik , RWE and grid firms Open Grid Europe and Nowega.