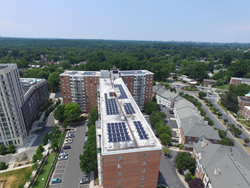 New solar PV system is the largest installation by a privately-held real estate on a multi-family building in Montgomery County, MD.

SILVER SPRING, MD.: Today, The Tower Companies and Prospect Solar, LLC announced that Blair House, located at 8201 16th Street in Silver Spring, Md., flipped the switch on a newly installed solar photovoltaic (PV) system. The project is the largest solar PV rooftop system on a multi-family building in Montgomery County, and will contribute to county’s goal to reduce greenhouse gas emissions to zero by 2035. The Tower Companies partnered with Prospect Solar with the goal to inspire the real estate industry to play an active role in fighting climate change by investing in on-site renewable energy.

Prospect Solar, a Virginia-based, full-service solar provider, designed and installed the 122 kW solar photovoltaic (PV) system for The Tower Companies (“Tower”), a privately held and family-owned green building leader that has both owned and managed Blair House since it was built in 1962. The 375,000 SF, 310-unit, 12-story multi-family building is LEED® Gold Certified under Existing Buildings: Operations and Maintenance. The building is also ENERGY STAR Certified with a score of 91, which means that its energy performance is in the top 9 percent of similar buildings nationwide.

“Investing in clean energy and more resilient real estate is not only good for the environment, but it’s also good for business,” said Eugenia Gregorio, Tower’s Vice President of Strategy and Sustainability. “This investment will yield a 100 percent guaranteed payback in the first year with positive cash flow for at least 20 years to follow. On-site solar installations like the Blair House project demonstrate a clear business case for renewable energy and what is possible with an enthusiastic team that is committed to addressing our climate emergency head on.”

The new solar PV system features 265 modules from U.S.-based manufacture SunPower, with an estimated annual production of more than 150,000kWh, or 12 percent of the total building energy demand. That’s enough electricity to power 75 apartments and is equivalent to the amount of carbon offset by 125 acres of U.S. forests in one year. Tower chose to purchase the system in lieu of a power purchase agreement, and anticipates a payback of approximately one year—a powerful model for other real estate owners to consider.

“The solar industry went from producing 4% of the nation’s new electricity generating capacity in 2010 to 51% in 2019. A lot of this growth can be attributed to utility scale installations, but recently more local real estate developers are realizing the benefits,” said Prospect Solar’s Vice President Andrew Skinner. “Installing a solar array on a 1960’s high rise building is just another great example of Tower’s leadership, proving that building owners can improve their bottom line while meeting their sustainability goals.”

The project will contribute to Montgomery County’s Zero Carbon Goal, which aims to reduce greenhouse gas emissions 80 percent by 2027 and 100 percent by 2035. According to the Generation Attribute Tracking System (GATS), there are more than 9,850 PV systems registered with the Renewable Portfolio Standard Program in Montgomery County. That translates to approximately 192 MW of PV capacity.

“Tower is a model real estate developer. Tower’s commitment to renewable energy, demonstrated by this new solar power installation at Blair House, is a great example of how the private sector can help reduce our country’s—and the region’s—carbon footprint,” said Montgomery County Council member Tom Hucker, who represents Silver Spring and chairs the council’s Transportation and Environment Committee. “The council declared a climate emergency in December 2017, and if we’re going to meet this existential threat, we need everyone to step up like Tower has.”

According to The Tower Companies’ Inaugural Corporate Responsibility Report, the company has reduced greenhouse gas (GHG) emissions by over 45 percent since 2010 through capital improvements and efficient operations. Since 2008, Tower has supported renewable energy projects through strategic purchases and on-site solar PV arrays to offset 100 percent of their portfolio’s carbon footprint. The company’s first on-site solar PV project was in 2014, when it completed the largest installation in Washington, D.C. on a Class A commercial office building. Tower plans to expand their on-site renewable energy portfolio with an estimated 2MW in the pipeline.

About The Tower Companies: For three generations, the family-owned Tower Companies has maintained a commitment to responsible development and continues to envision a world where buildings inspire and enrich the lives of their occupants and create positive social change. The sustainable building leader owns, develops, and manages over 6 million square feet in the Washington, D.C. metropolitan area consisting of office buildings, office parks, lifestyle centers, regional malls, eco-progressive live-work-play communities and hotels, with an additional 13 million square feet in the development pipeline. In 2004, The Tower Companies was the first in the United States to achieve LEED® certification at a multi-family community, Blair Towns, and since then, 95 percent of their commercial and multi-family residential properties have achieved LEED® certification and 80 percent are ENERGY STAR® certified. In addition, Tower publicly reports their portfolio’s carbon footprint to The Climate Registry and offsets 100 percent of GHG emissions by supporting renewable energy projects in North America. Through a partnership with the Department of Energy, the Tower Companies pledged to reduce energy and water consumption 20 percent by 2020, then surpassed those targets in 2017. The Tower Companies is an international authority in the industry and has been recognized for its commitment to sustainability and energy independence by numerous national organizations and federal agencies, including the U.S. Green Building Council, U.S. Department of Energy, U.S. Environmental Protection Agency, and more.

About Prospect Solar: Prospect Solar, LLC was established in 2010 as the professional’s choice for design-build solar photovoltaic energy system installation. They draw from the construction industry experiences of their sister company, Prospect Waterproofing Company. A foundation of more than 20 years of roofing and waterproofing expertise allows Prospect Solar to provide clients with exceptional quality and value. Prospect Solar’s turnkey service is as sustainable as their business model, and continual investments in solar training, certifications, and oversight ensure the safest possible installations. Prospect’s services include engineering, economic analysis, financing, monitoring, and custom installations.

0
0   0
previous Why Solar Skeptics Are Deciding to Make the Switch to Solar
next AEP Seeks Approval for 1.5GW Wind Development in Oklahoma