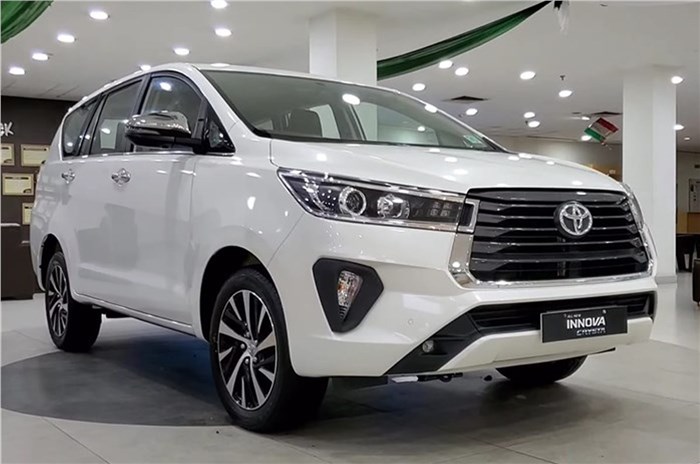 The 2.7-litre petrol engine from the Innova Crysta will likely be brought back with CNG fuel option.

Just as the Toyota Innova Hycross made its debut in India last week, the Japanese carmaker has now delisted the older Innova Crysta from its India website. But fret not, Toyota is far from discontinuing the much-loved people’s mover in India. The Innova Crysta will be back in the market sometime next year, and could even carry some important updates over the outgoing model, including a CNG option.

Since Toyota halted bookings for the Innova diesel in August this year owing to chip shortages and disruptions in the supply chain, the Innova Crysta was only available with its 150hp, 2.7-litre petrol engine.

However, the Innova Crysta, which mostly appeals to fleet operators and heavy mile munchers, barely has any relevance with a large displacement petrol engine. In the MPV space, which averages 20,000 units a month, diesel still accounts for over 50 percent of sales.

Therefore, and as we have already reported, Toyota will bring back the Innova Crysta diesel sometime next year to hold on to its prospective diesel buyers. And while a petrol engine option remains likely, what’s more interesting is that Toyota is evaluating a CNG fuel option for the updated Innova.

This will inevitably widen its appeal even more, especially for the fleet segment. Sources tell us that it could be the 2.7-litre, four-cylinder petrol engine that was so long offered with the Innova Crysta that could be brought back in CNG-spec.

Thanks to its collaboration with Maruti, Toyota already has a couple of CNG vehicles in its arsenal. With the Glanza CNG and soon-to-be-launched Urban Cruiser Hyryder CNG, this fuel option has already made its way into premium vehicles. Toyota will then also have covered all bases across the Innova Crysta and Innova Hycross range combined – petrol, diesel, CNG and petrol-hybrid.

When reintroduced, Toyota will sell both the Innova Hycross and Crysta alongside each other. Toyota is, therefore, likely to rejig the variant line-up of the Crysta to allow both models to co-exist with some differentiation in price.

This could see the discontinuation of the higher trims on the Innova Crysta, and perhaps a reshuffle of the equipment list as well to position the Crysta as a more accessible model in the Innova range. The Hycross, meanwhile, will be positioned at a slight premium. Toyota could even rechristen the Innova Crysta and will also likely introduce some cosmetic updates to the exterior to give it a fresh new appeal, something we have already seen Mahindra do when they reintroduced the Scorpio Classic alongside the newer Scorpio N.