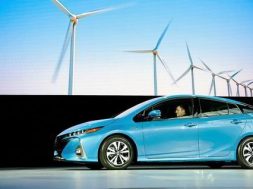 Automotive giant Toyota unveiled plans to enter the renewable power generation industry after a deal to set up Toyota Green Energy with a Japanese utility.

Toyota – one of the world’s largest auto manufacturers and a pioneer of electric vehicles (EVs) with its Prius hybrid model – said the new company will run wind and solar plants in Japan to help the group meet its 2050 environmental ambitions.

The auto-maker will own 50% of Toyota Green Energy, with power utility partner Chubu Electric holding 40%.

The remainder will be owned by Toyota Tsusho, a part of the wider Toyota group that’s already active in wind and solar development in Japan and elsewhere and will “make use of its expertise in management of such businesses”.

Toyota said: “The clean energy to be supplied through this business is expected to reduce CO2 emissions from plants and other facilities to zero in the future and to contribute to the realisation of a low-carbon society.”

The global automotive sector is increasingly looking to position itself for a massive ramp-up of electrification, both in production operations and the use of green power for EVs that will dominate sales over the next few decades.

News of the renewable JV came a day after Toyota said it would partner with Chinese power technology group BYD to develop new EVs.

Like others in the sector, Toyota has already signed power deals from renewables projects around the world, for example in Argentina with YPF Luz.

Chubu Electric is already an investor in the Japanese renewables sector – including what’s set to be one of the country’s first offshore wind farms. Chubu is also the minority partner with Mitsubishi in a deal to buy Dutch utility Eneco and has interests in European transmission assets.

Toyota Green Energy is due to start operating from July and will be based in Nagoya City, said a statement.(Copyright)