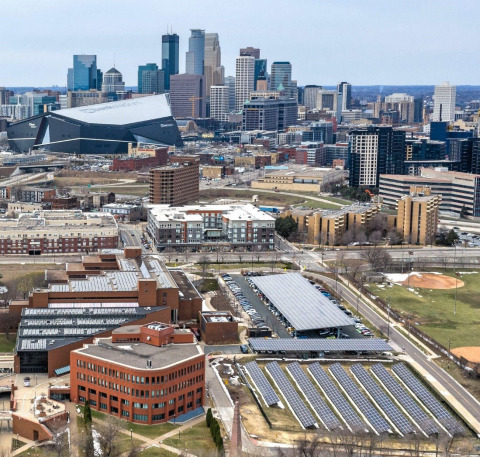 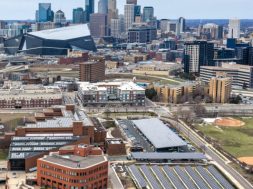 FRAMINGHAM, Mass. & MINNEAPOLIS: Ameresco, Inc. (NYSE:AMRC), a leading energy efficiency and renewable energy company, today announced their successful project with the University of Minnesota for solar installations throughout the Twin Cities campus. The project will result in the equivalent of 1,705 metric tons of CO2 saved per year and demonstrates the importance of sustainability leadership by the University throughout the higher education community.

“The University has a carbon footprint reduction goal of eliminating our net carbon emissions by 2050, and we are able to take a significant step in achieving that goal with this project.” said Shane Stennes, Sustainability Director for the University.

Ameresco was selected through a competitive Request for Proposal process and awarded the solar contract by the University of Minnesota in 2017. The project allows Ameresco to engineer, procure, construct, operate, and maintain the comprehensive solar solution. The first phase of this project includes nine sites on the Twin Cities campus. A potential second phase may result in expanding with similar solar installations on the satellite campuses in Duluth, Morris, and Crookston. The solar installations include ground mounted systems, ballasted rooftop systems, and parking lot carports.

“The University of Minnesota has demonstrated stewardship within the higher educational community by embarking on this project across many campuses throughout the state,” said Lou Maltezos, Executive Vice President of Ameresco. “Leadership in sustainability is important for higher educational institutions across the country and the University of Minnesota has taken the steps to reduce risk and improve their energy portfolio.”

The University has benefited from the opportunity for student involvement in sustainability efforts, along with the annual electric output of over 2.4 million kWh to hedge their electricity financial portfolio and limit overall institutional risk.

About University of Minnesota

The announcement of a customer’s entry into, or completion of, a project contract is not necessarily indicative of the timing or amount of revenue from such contract, of the company’s overall revenue for any particular period or of trends in the company’s overall total construction backlog. This project was included in our reported contracted backlog as of December 31, 2018.