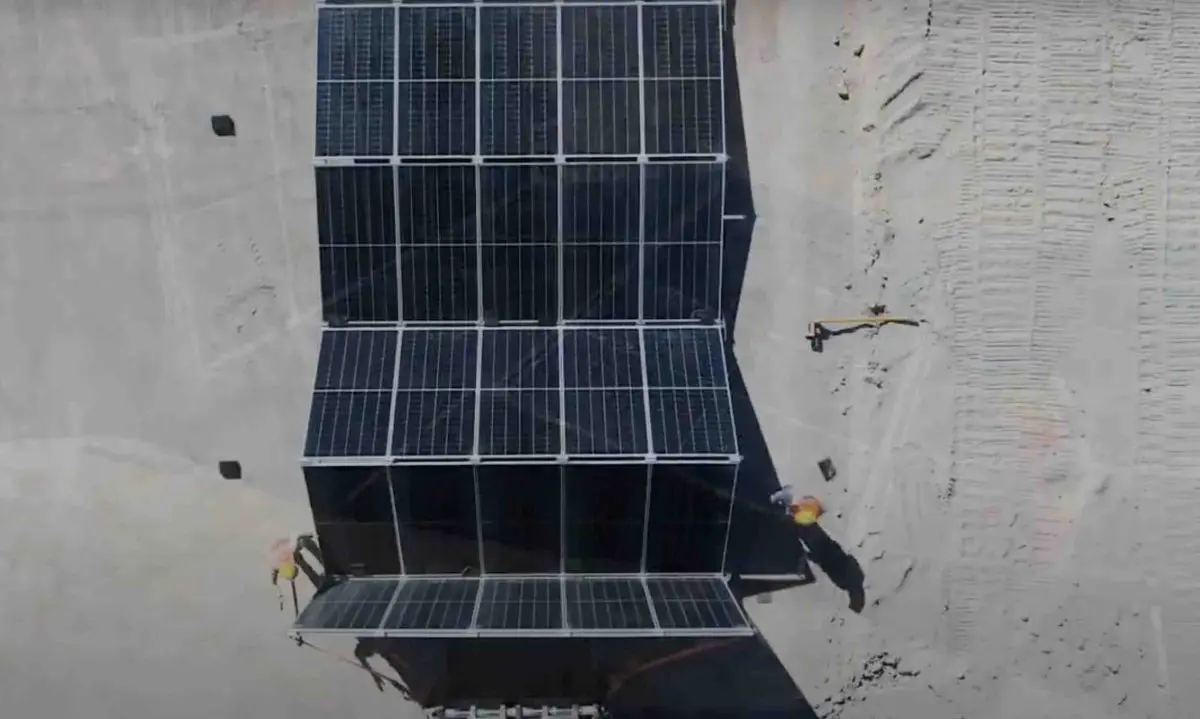 As much as 17.5 gigawatts (GWac) of planned US solar capacity installations in 2022 are in doubt after the Department of Commerce (DOC) opened an investigation into panel imports from southeast Asia, Rystad Energy research shows.

The US was expected to install 27 GWac of solar energy capacity in the utility, residential, and commercial and industrial (C&I) markets this year, but with rising commodity prices and this new threat of tariffs on vital imports, 64% of those additions are now in jeopardy.

The recent launch of an Antidumping and Countervailing (ADCV) investigation by the DOC has US suppliers worried about potential penalties on panel imports, which would likely be backdated. In response, Chinese panel manufacturers are halting shipments to the US until the results of the investigation and any retroactive action by the DOC is revealed. A preliminary judgement is scheduled for August, with a final decision due by January 2023.

The investigation comes as domestic US solar companies are concerned about the rise of Chinese manufacturers using cheap raw materials and shifting cell and panel assembly to southeast Asia to circumvent an existing ban on Chinese imports. With imports frozen while the investigation is pending, annual capacity additions could plummet from 22.6 GWac in 2021 to 10.07 GWac this year, the lowest annual total since 2019.

The DOC is investigating imports from four Southeast Asian countries that play a pivotal role in the US market – Cambodia, Malaysia, Thailand and Vietnam. Imports from these countries accounted for 85% of all solar panel capacity brought into the US in 2021, totaling 21.8 GWac. In January and February of 2022, their total share of imports was 99%.

“In an attempt to limit cheap Chinese solar panels entering the market from southeast Asia, and with one eye on the goal of shoring up a domestic supply chain, the US has seriously dented its solar capacity forecast for 2022 and beyond. This could be the most disruptive event ever to face the US solar industry,” says Marcelo Ortega, renewables analyst with Rystad Energy. 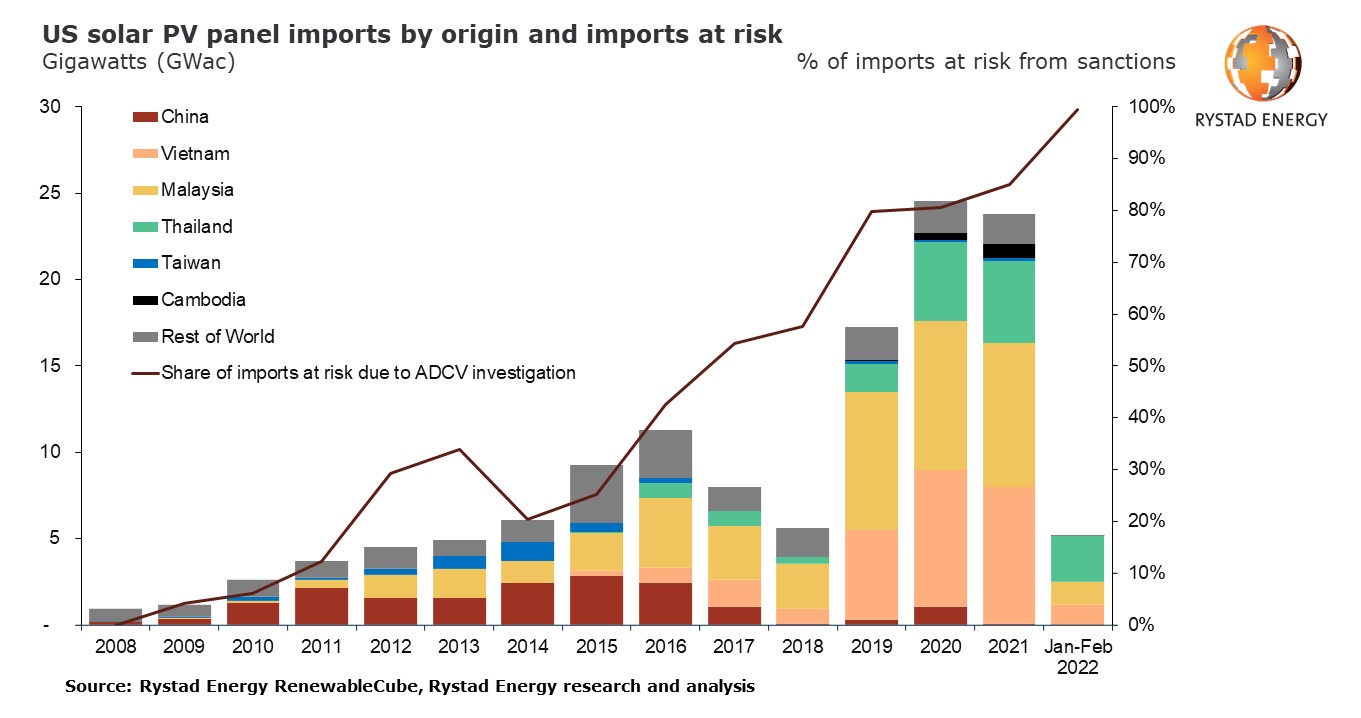 How the freeze happened

In a 2012 investigation into Chinese manufacturers, ADCV tariffs were eventually applied at different rates to different suppliers. The most common rate was 30.66%, but some rates fell as low as 24%, while other suppliers were slapped with a 250% tariff. If the DOC decides a tariff extension is warranted, equipment imported after the investigation announcement would be permitted, but tariffs could be backdated on imports as far back as November last year. Between November 2021 and February 2022, US buyers imported $1.46 billion of solar panels from the four southeast Asian countries under investigation, meaning Chinese suppliers could be collectively liable for anywhere between $365 million and $3.6 billion in additional tariffs. Chinese panel manufacturers are unwilling to risk such prohibitively high fines, and many have opted to entirely halt panel exports to the US.

The probe is not limited to cSi PV panels but also includes PV cell imports. This is significant for the US domestic panel manufacturing industry as its 5 GW of capacity is mainly panel assembly and relies heavily on cell imports from overseas. Last year, 46% of imported cells came from the countries under investigation. US manufacturers are also feeling the effects of the investigation. Although the threat of sanctions may incentivize suppliers to build US PV manufacturing facilities, it would take at least 18 months to build a domestic supply chain from polysilicon to assembled panel. If investment decisions are made after August 2022, when preliminary results are to be announced, this capacity would be operational in January 2024 at the earliest.

Even before the probe, the US PV industry began 2022 in a tough spot. More than 7 GWac of solar PV was delayed last year by more than six months due to high commodity prices, federal tax credit uncertainty and unfavorable policies. This included the US government’s December 2021 decision to ban imports containing goods from China’s northwest region of Xinjiang due to reported human rights abuses committed against the Uyghur people. With 40% of the world’s silicon production based in Xinjiang, this policy effectively halved the number of panels that can be imported to the US, disrupting the already ropy supply chain.

In theory, if panel manufacturers can prove they source silicon and components from outside of Xinjiang, their exports will be unaffected. However, before the ban, suppliers did not need to track the origin of their inputs, and any traceability system takes time to implement. In practice, the rules set out in the new bill are ambiguous and entail unknown risks for suppliers and financiers. Although the legislation enforces a ban on all Xinjiang goods, the US already has a partial ban on panels with silicon sourced from this region. In June 2021, US Customs and Border Protection (CBP) banned imports of solar panels containing silicon produced by four Xinjiang-based silicon producers. This resulted in CBP detaining imports until the polysilicon source could be proven. Chinese panel suppliers claim between 40 megawatts (MW) to 100 MW of panel capacity has been detained, though the exact level remains unknown. 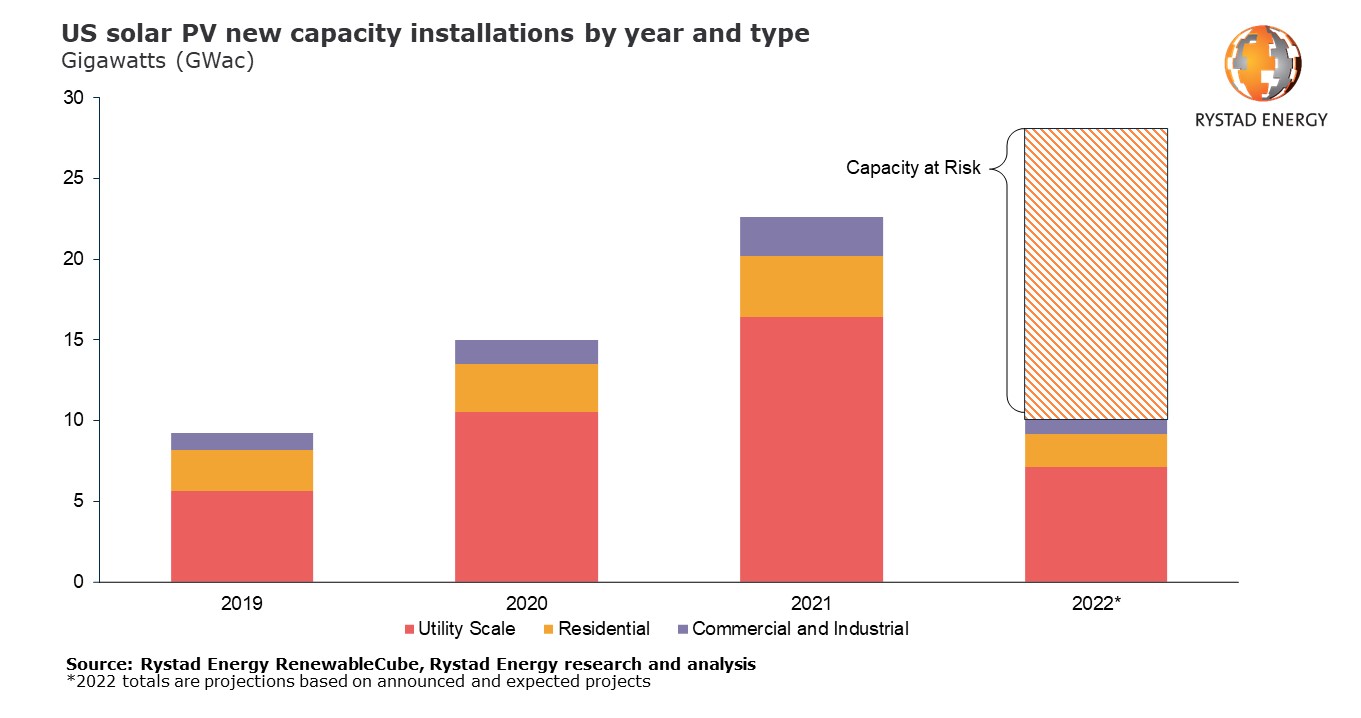 For more analysis, insights and reports, clients and non-clients can apply for access to Rystad Energy’s Free Solutions and get a taste of our data and analytics universe.