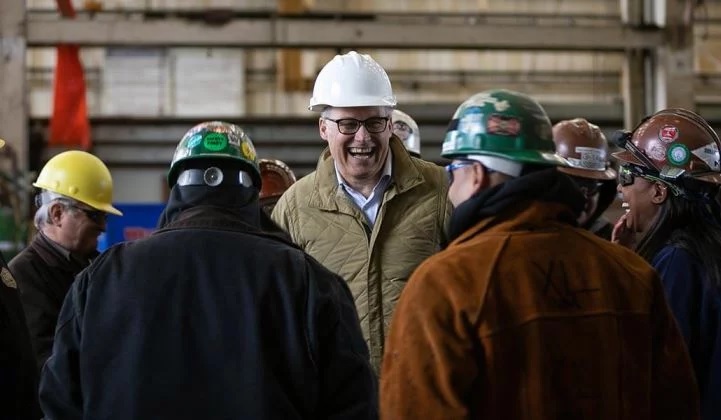 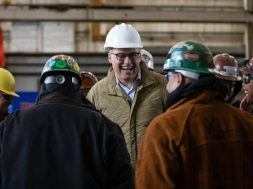 The Northwestern state joins three others in mandating that all of its electricity comes from carbon-free sources by midcentury, as its governor prepares for a run at the presidency.

Washington state’s Senate on Monday gave the final vote of approval to a law requiring 100 percent clean energy by 2045, joining three other states — New Mexico, California and Hawaii — with similar legislation on the books. A new Puerto Rico law requires 100 percent renewables by 2050.

Governor Jay Inslee (D), who is running for president on a climate change platform, has championed the Washington bill. It now goes to his desk for signature.

Like other states, Washington’s legislation leaves technologies such as nuclear and carbon capture and sequestration on the table.

In addition to requiring 100 percent clean energy, Washington’s law mandates a coal phaseout by 2025 and requires that utilities ratchet up their clean-energy commitments over time. Coal accounted for 13 percent of the state’s mix in 2017.

While electricity sales must be carbon-neutral by 2030, utilities can meet 20 percent of that requirement with renewable energy credits, through an “alternative compliance payment” or by investing in “energy transformation projects” that reduce the generation of electricity like energy efficiency or transportation electrification.

Washington is well on its way to meeting its targets. According to data compiled by the state’s Department of Commerce, nearly 68 percent of the state’s generation in 2017 came from hydropower. Nuclear accounted for just over 4 percent and wind for nearly 3 percent. Together, coal and natural gas produced about 24 percent of electricity for the state’s utilities in 2017.

Avista, a utility that provides power in an eastern portion of the state, reports that over 50 percent of its power is already renewables — most of it hydro. Ahead of the law’s final vote, Avista announced a commitment of its own to move to 100 percent clean energy by 2045. The utility also serves customers in Idaho and Oregon.

The largest utility in Washington, Puget Sound Energy, got 33 percent of its electricity from hydropower in 2017 and 6 percent from wind. Coal and natural gas accounted for 38 percent and 21 percent, respectively. Currently, PSE is working to close down the capacity it owns in Montana’s Colstrip coal plant. Avista and another regulated utility that operates in Washington, PacifiCorp, are working to exit the plant as well.

In an emailed statement, Inslee said he looks forward to signing the legislation, which he called “the country’s most forward-looking clean energy bill.”

“This bill will fundamentally transform Washington’s energy future,” he said in the statement.

Aside from bringing changes in Washington state, the law will serve as a feather in Inslee’s cap for his 2020 campaign.

Washington has struggled to pass legislation putting a price on carbon under his leadership, but the governor has continued to push for stringent climate policies in the state. On the national stage, Inslee is pressuring his fellow Democratic presidential candidates to back a primary debate focused exclusively on climate change.

0
0   0
previous Tenaska closes financing for wind project in Northwest Missouri in US
next The Real Art of the Deal: How to Negotiate Billions in Renewables Projects